I awoke to the melodious songs of warblers and other birds perched in the oak canopy at 4:40 a.m. A few minutes later, trumpeting sounds of sandhill cranes announced their presence from a nearby slough and with this second wake-up call, I proceeded to break camp. I departed into a bright, cool, morning at 5:45 a.m. The light winds from the north were a blessing for my planned descent through the expansive Petenwell Lake, the second largest body of water in the state, covering an area of 36 square miles. This is tiny compared to the historic Glacial Lake Wisconsin which once spread out over 1500 square miles in what is now the central sand plains. Northerly winds increased to 5 to 10 mph as I entered the impoundment and provided manageable assistance to my southerly progression downstream.

"When the glacier came down out of the north, crunching hills and gouging valleys, some adventuring rampart of the ice climbed the Baraboo Hills and fell back into the outlet gorge of the Wisconsin River. The swollen waters backed up and formed a lake half as long as the state, bordered on the east by cliffs of ice, and fed by the torrents that fell from melting mountains."

The historic river channel meandered considerably through this section of the Wisconsin; however, the impoundment created by Petenwell Dam flooded this channel and greatly shortens the actual "river channel length" through this reach of the river. Now the only visible remnants of this circuitous route are found in the broad meander scars cut into the high sand banks that border the flowage or are seen on maps depicting the political boundary line separating Juneau and Adams Counties.

Juneau County's Wilderness Park, located about mid-way through the impoundment on the right bank, provided a convenient rest stop and an opportunity to refresh my water supply. An elderly man was fishing without success at the park's boat ramp dock and I avoided entanglement with his fishing lines by landing at the swimming beach just upstream. The park was very clean and had new restroom facilities with showers and flush toilets. The park seemed rather empty and very few campers were noted.

Northerly winds increased to 10 to 15 mph and white caps were forming as I began a 5-mile, open-water crossing at the southern end of the lake in bright sunny weather. The horizon was almost entirely flat and covered with water with the exception of a small darkish protuberance at a bearing of 190 degrees. I assumed this represented Petenwell Rock mound, which rises up a few hundred feet above the sand plains about three-quarter mile below Petenewell Dam. Since this was my desired heading, I pointed my bow to this geological landmark and paddled nonstop for an hour and a half.

Large grass-like flakes of Aphanizomenon appeared in the otherwise clear, turbulent waters in the last half-mile portion of Petenwell just upstream of the dam. I reached a narrow concrete ramp just west of the hydroplant a few minutes after 11 a.m. Removing gear and the canoe from the water while large wind-driven waves crashed onto the ramp was challenging and difficult for one person. I stood partially in the water to keep the canoe from being tossed up on to the riprap while using my free hand to heave packs and gear onto the rock shoreline hoping they would not roll backwards into the lake. After enough cargo was removed from the canoe, I pushed the canoe perpendicular to shore then pulled the canoe up the slippery, algae-covered ramp as waves crashed over the stern.

Numerous boats and shoreline fisherman were scattered about the calm tailwater area below Petenwell Dam. The river's reddish color reappeared similar to that observed above Wausau. Although there were moderate filaments of buoyant blue-green algae, the transparency was actually quite good due to effective sedimentation of the brown colored solids in the huge upstream impoundment.

Three miles below Petenwell Dam, the river opened up to Castle Rock Lake, the second largest body of water on the Wisconsin. A complex of islands, side channels and shallow backwaters formed the initial transition from the river to the lake-like portion in the lower end of this impoundment. Surprisingly, the backwaters were devoid of waterfowl, herons or shorebirds and submergent vegetation was sparse. The blue-green algae that were common upstream became inconspicuous in the lower end of the flowage.

Hundreds of campers, fishermen, swimmers and sunbathers were scattered along the shoreline at Adams County Castle Rock Park, a stark contrast from the largely abandoned park land observed upstream in Petenwell Lake this morning. I carefully guided my canoe past the many young swimmers that had left the confines of the designated swimming area and then turned the canoe into shore just downstream of the swimming beach in order to stretch my legs and use the restroom. I was off again at 3:30 p.m. and descended the last mile and half to Castle Rock Dam with 10 to 15 mph tailwinds. The narrow, steep, concrete ramp take-out was identical to the one used at Petenwell Dam except this one was on left of the hydropower plant and presented similar difficulties for unloading gear and removing the canoe from the wind-swept waters.

I dinned at a picnic table near the boat ramp below Castle Rock Dam shortly before 5 p.m. The parking lot for the boat landing and shoreline fishing areas was empty and no boats were observed in the tailwater area. From my dining area, I spied a large empty beach on the opposite side of the river and headed for this encampment after an unhurried meal of re-hydrated dried camp food and a cold Pepsi, the later being secured from a vending machine at a nearby bait shop.

The tailwater sandbar was sparsely covered with small shrubby oaks and the high western bluff shaded the area from the early evening sun. I laid out the tent on the highest point I could find - about 3-ft above the present river elevation. I secured the tent to small trees and headed for bed shortly after 7 p.m. The roar of waters rushing through a partially opened tainter gate one-quarter mile upstream provided soothing sounds for the second night of summer. I canoed forty miles and made two portages today. I felt relieved that the biggest waters of the Wisconsin were behind me. Two more dams to the Mississippi!

"The highest mercury levels in fish the state occurred in the Castel Rock and Petenwell Flowages and Dells area of the Wisconsin River. Here fish fillets commonly averaged 1.25 ppm mercury… In general, higher levels of mercury in fish can be related to exposure to wastes from pulp and paper mills which used mercury compounds and chlorine-caustic soda plants employing the mercury cell process" ( WDNR, 1972). Today, mercury concentrations in fish from this section of the Wisconsin are lower due to discontinued use of mercury at the upstream industrial facilities. However, the state still issues consumption advice to those consuming fish taken from the river and likely is related to these historic inputs (sediment contamination) and ongoing atmospheric deposition from local and distant emissions of mercury). 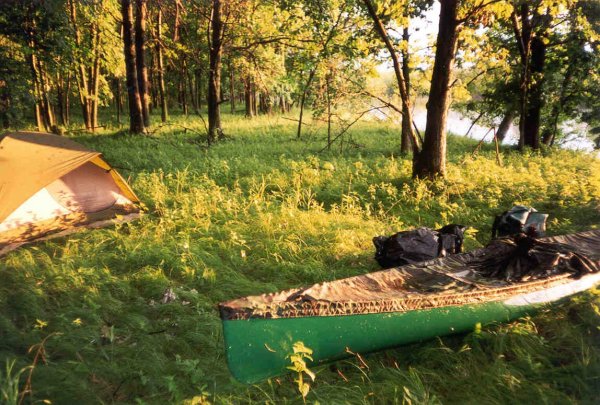