Another clear cool morning greeted me at 4:45 a.m. At 6 a.m., I used the Mosinee portage "hot line" to obtain assistance for the 1-mile carry to the put-in downstream of the hydropower plant on the opposite side of the river. I deemed this advisable since a warning on the portage sign read: "DO NOT PROCEED DOWN RIVER FROM THIS SITE WITHOUT SECURING MOSINEE PAPER CORPORATION HELP." I lifted the heavy black handset and within two rings a man's voice answered from the security guard station. I explained my intentions and who I was then requested assistance for the portage. He explained that they didn't have anyone available to help at the time and there would likely be more than an hour wait. He then started questioning me about where I lived, who I was and other personal information. This became intimidating and I soon politely advised that I would not need their help and would make the portage on foot instead. I prepared the canoe carrier and loaded it with most of my gear except my heaviest dry bag, which I heaved on to my back and was soon underway.

Traffic on Highway 153 was busy with people rushing to the paper mill to start another day of work while I started mine. The noise of water rushing over the long spillway upstream of the highway bridge caused me to think about the dangerous section of river that I was avoiding. Part way cross the bridge I stopped above the old eastern river channel that carves its path through a narrow rocky cataract (Little Bull Falls) some 40 feet below. The turbulence and dangerous eddies were quite impressive and I wondered what this rapids would look like in the full furry of a flood without the upstream dam. I soon gained deep respect for the loggers and other boatmen who made this perilous passage with considerable risk over one hundred years ago.

Rafting at Little Bull Falls - "No one not having seen the running of Little Bull in high water can form any idea of just what its like, the awful danger to be faced, the terrible strain of mind and muscle as you hear the roaring, tumbling, seething and lashing of the mighty volume of water rushing to the vortex out of sight of those who are borne on the raft into the jaws of death."

I reached the put-in after an easy 29-minute walk and was on the water again by 7:30 a.m. I paddled over to east side of the river and ascended the rapids a short distance to obtain another look at the falls and to take water quality measurements. On my return west across the channel, I discovered Mosinee Paper's wastewater plume using my field conductivity meter, a device used to detect the presence of dissolved minerals. Although the outfall did not give is location with any visual clues or odors, the marked spike in my conductivity readings by 30% indicated that I was in the effluent mixing zone with the river.

A father and his young son were fishing from a small aluminum boat powered by an old Evinrude a short distance downstream of Mosinee. I approached quietly and asked if they had any luck. The small boy sprang from his seat and quickly lifted up the stringer containing two small channel catfish. He exclaimed that he had caught both of them and point out the hole where he pulled them from the Wisconsin. His proud father beamed with delight at his son's excitement and I wished them additional success and headed down river.

The Wisconsin bends sharply at three locations as it winds its way toward Lake Dubay, the next downstream impoundment. I shortened my trip considerably in this reach by taking two active cuts where the river was beginning to carve out a shorter path through the wooded floodplain. I figured these shortcuts saved me 20 minutes of paddling almost enough to make up for what the river took from me last night while being lost in Mosinee Flowage.

A graveyard of stumps and dead trees, washed in during previous periods of high flows, marked the upper end of Lake DuBay where the river spreads out considerably and the current velocity decreases. Two miles to the west, the outflow of the Big Eau Pleine Reservoir, the southern most reservoir operated by WVIC, releases its waters to the western most portion of Lake DuBay. Massive, new log homes have been constructed along the eastern shore. Downstream of the Highway 34 bridge, filaments of the blue-green alga, Aphanizomenon flos-aquae, were suspended at the surface. This marked the first occurrence of an algae bloom during my trip and I suspected its presence was influenced by the inflows from the eutrophic Big Eau Pleine Reservoir which typically is dominated by this alga during the summer months. This reservoir and its algae were the focus of my graduate studies while at the University of Wisconsin - Stevens Point more than 20 years ago.

Crossing the expansive Lake DuBay was made without incident as a result of light winds and the absence of large recreational boats. During the crossing, numerous large carp were observed sucking on surface organic matter and startled easily as I approached their feeding frenzy. I landed at sandy beach just upstream of DuBay Dam just after 11 a.m. and began my portage. The path to the put-in was sandy and bordered by pine. However, the descent to the tailwater area below the dam was very steep and covered with loose rocks and stones and presented a very risky carry. Two of the dam's tainter gates were partially raised and the gushing water from the large impoundment created quite a froth and tubulence in the tailwater area. The turbulent water made reloading the canoe difficult at the put-in as a result of the waves and rocky shoreline. At 12:20 p.m. I was floating in the tailwater area and was soon underway.

John Baptiste DuBay - "was as characteristically Wisconsin as the Wisconsin river itself, whose long reaches and great breadth he had traveled as a trader and voyageur from a decade beyond recall. For his position as trader and central Wisconsin agent for John Astor's American Fur Company was a position to be conjured with in those day…The climax of his colorful career was reached in August 1857 when he shot and killed the proprietor of the Fox river waterpower…at the ancient trading post grounds adjoining old Fort Winnebago, east of Portage City-where he had had statewide operations for twenty years…His trial was accompanied by all the notoriety and fanfare that could possibly surround such an event." Two trials were held and the jurors failed to reach a verdict. A third trial was attempted but failed due to the absence of the District Attorney. He lived out the rest of his life in the Town of Eau Pleine, the site of his former trading post. Early maps of the Wisconsin show his name associated with an early settlement on the lower Wisconsin northeast of the present city of Boscobel called "Prairie duBay." However, his trading post at "DuBay Point" near the mouth of the Little Eau Pleine River was more commonly known and the present day flowage that inundated his former settlement was named in his memory.

My run down to Stevens Point started off slowly at first. I had to constantly correct my bearing by paddling harder on my port side in order to make the canoe go straight. Finally, after about an hour of frustrating paddling I turned around to look at the stern and discovered my 25-ft long stern rope dragging in the water. I cussed to myself for not checking this earlier and pulled ashore to make things right.

Westerly winds increased in the afternoon and provided some assistance in the last several miles to Stevens Point where the river runs in a southeasterly direction. Fast speedboats from the south end of the flowage raced by my canoe as I proceeded down the narrow channel near Rocky Run. I soon left the channel to avoid a possible collision and sought the shallows on the right side of the main channel border that was avoided by the over powered watercraft. This provided a better chance to observe shoreline development and scout for submersed vegetation. Few beds were noted in the shallows possibly due to the shifting sandy substrate. The lower end of the flowage was moderately developed with large spacious homes dominating the right bank along Highway 10.

"The Wisconsin River, one of the noblest of nature's streams, rises in the northern part of the county, receiving its waters from a multitude of silvery lakes, and meanders in nearly a south course, though the center of the county, into Portage, and empties its waters into the Mississippi, near Prairie du Chien…A peculiar characteristic of the country is its general healthfulness. The water is pure and soft, the atmosphere clear, and the climate salubrious. No sudden changes from heat to cold, nor vice versa. Winter weather is steady; spring comes and takes complete possession, and winter yields without a struggle."

I pulled out above Stevens Point Dam just before 4 p.m. During my portage to the put-in below the dam, I met my former thesis advisor, Dr. Byron Shaw, who I had arranged to meet earlier in the day. Byron is now retired and works part time for the university when not building beautifully crafted cedar-stripped canoes in his old barn near Amherst Junction. We talked of canoes and canoeing and then he assisted me loading the canoe in the tailwater area. We shook hands and he wished me well on the rest of my journey.

About two miles downstream, I had to pull out again for the Conant-Campbell Dam, the second dam in the Stevens Point area. This short river reach was surprisingly undeveloped considering its close proximity to a large city. The river was relatively narrow and swift with boulders and rock ledges at in the upper end of the pool. Tall white pines were prominent features of the sylvan shoreline and three large islands divided the river into two channels in a relatively short reach. For a moment, I had reflections of canoeing parts of the upper St. Croix River in northwestern Wisconsin.

I decided to bypass the Altech impoundment due to its short half-mile reach and proceeded to the Altech Dam spillway by walking along River Drive that paralleled the river on the right bank. It was late in the day and I started consider camping opportunities. I stopped at Stora Enso's (formerly Consolidated Paper Co.) Water Renewal Center just west of the Conant-Cambell Dam, thinking I might get authorization to camp somewhere on their property, but found nobody to ask permission so I headed south on River Drive pulling my gear-loaded canoe behind me.

A small park borders the river on the west side of the Altech Dam Spillway. I made dinner on a picnic table while I continued contemplating where I would make camp for the evening. I finally decided to make an inconspicuous campsite at the put-in and setup my tent in the underbrush beneath the high riverbank that formed the western shoreline. Two Hmong fishermen walked by at dusk while I finished preparing notes on the day's journey from the confines of my tent. They offered no objections to my encampment and concerned themselves with fishing the fast waters below the spillway. I reluctantly looked over maps for tomorrow's journey, a reach of river that I had not been looking forward to due to its numerous portages through the 10-mile urban corridor of Wisconsin Rapids, Port Edwards and Nekoosa. 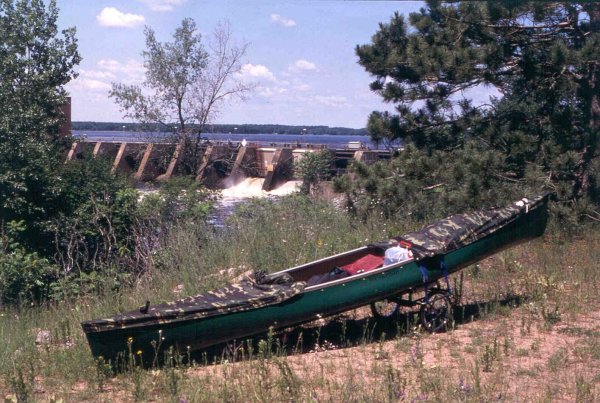