A siren at Tomahawk's Dam sounded for 2 minutes to mark my departure at 5:30 a.m. The warning is apparently provided to warn fishermen of the change in the dam's gate settings that would quickly change the elevation and flow in the tailwater area. I stared at the dam waiting for some sudden burst in flow to appear to give me a nice sendoff downstream but to my dismay, none appeared or was apparent. After several minutes of anticipation for this surge in flow, I grew tired of waiting and commenced my descent with overcast skies looming overhead.

About a mile downstream, the Spirit River added considerable reddish-stained waters to the Wisconsin. I suspected its flow was above normal as a result of the previous heavy rainstorms that swept through northern Wisconsin a day and a half earlier when I was in Rhinelander. The Wisconsin River's current was moderately swift for the first few miles below Tomahawk Dam but then decreased noticeably due to the backwater influence of Grandmother Dam. During my descent through the upper portion of Grandma flowage many deer were seen grazing along the riverbank or on the few small islands in the upper section of this narrow riverine impoundment. Shoreline development was sparse and those areas with cottages or modest homes have mostly left shoreline vegetation intact.

A faded portage sign marked the take-out at Grandmother Dam and was partially hidden behind a bush a few hundred feet above the dam along the left bank. However, the river was relatively narrow and it was easy to spot the take-out on the opposite bank just above the hydroplant. Wide concrete steps from the river to the top of the bank were quite helpful. The trail to the tailwater was well marked and relatively short. A spacious wooden stairway provided a safe conveyance to the put-in that offered rocky, swift running water as a result of its close proximity to the tailrace of the hydroplant.

A severe thunderstorm with dangerous lightning delayed my departure from Grandmother Dam for over an hour. I stooped low on the last wooden step and passed time by counting seconds between the flashes of lightning and booming thunder. Two nearby bank fisherman gave up their posts and retreated to the safety of their Ford truck. The slow moving storm seemed to take forever to pass and I anxiously departed at 9:30 a.m. after the interval between flashes and crashes exceeded several minutes. As I nervously poled downstream with my 11-foot aluminum lightning rod in hand, I wondered if I might have been too hasty in my departure as thunder reverberated in the distance.

Grandfather flowage was more developed than its upstream companion probably due to the closer proximity of Hwy 109, which parallels the long, narrow impoundment on the left bank. One property owner has lined his shoreline with beautifully polished red granite stones, apparently rejected tombstones or similar monuments from a nearby quarry that didn't make grade. If not, they may represent the most expensive riprap used on a waterway in the entire state of Wisconsin.

Shortly before noon I arrived at Grandfather Dam and Hydro, the most impressive hydraulic engineering feat on the Upper Wisconsin River. Here a dam has been placed above a former rocky cascade and the river is diverted through a three-quarter mile long diversion canal. At the end of the canal, the water is squeezed through two large diameter pipes called penstocks and then drops about 70 feet to the hydroplant about a quarter-mile below. The water surface elevation change from the canal to the tailwater exceeds 90 feet and represents the largest head of all dams on the Wisconsin. Huge boulders line the almost dry historic channel, but occasionally, water is "wasted" from the dam's pool and diverted though the original watercourse for thrill-seeking kayakers.

I decided to take the well marked but long portage on the left bank that parallels the penstocks. Substantial spray gushed out through leaks in the western most pipe as I wheeled my canoe and cargo down through the dirt pathway to the put-in below the hydroplant. The put-in was difficult due to numerous rocks and close proximity to the tailrace of the power plant.

Another thunderstorm forced me off the river at 1:25 p.m. about one mile below Grandfather Hydro. I took shelter at Camp New Wood County Park, which offered nice restrooms and an open shelter near the boat landing. After about 30 minutes, I was underway again and looking forward to Posey Rapids that presented itself just downstream where I paddled through without incident.

Bill Cross rapids provided more of a challenge a few more miles down river. I ran the left side, which had two mean bends with numerous exposed boulders. I paddled through most of it then decided to line down the last drop rather than paddle or pole. As I carefully passed down my heavily loaded canoe through last chute, I thought of Father Rene' Menard who was believed to have lost his life near here while walking around this rapids 338 years ago during his ill-fated trip from Lake Superior to the upper Black River. He wandered too far from the river and apparently became lost in the wilderness and was never heard of again. I said a short prayer to the deceased missionary and did not stray from the water's edge least I follow a similar fate.

"The portage trail around Bill Cross Rapids is about twenty-five rods long. The trail runs now, as it probably did during the seventeenth century, along the west bank of the river, this bank being somewhat low. The east bank is high… the surrounding country was heavily timbered with pine and hemlock. In such a place a few steps in the wrong direction, steps which it is always easy to take, and one is literally swallowed up in the forest. Such undoubtedly was the fate of Menard…He became separated from his companion about August 10th (1663). He probably survived some time- perhaps five days- as he had in his possession a pieced of smoked meat about the size of a man's hand… Such was the life, such the death, of the gentle hero- the predecessor of Allouez and Marquette in the Lake Superior region, the pioneer missionary to what is now Wisconsin. "

Strong headwinds slowed my descent through Lake Alexander, the next impoundment found above Council Grounds State Park north of Merrill. The skies finally cleared and warm humid weather returned on my arrival at the north end of the State Park about a quarter mile upstream of Alexander Dam. I spent the next 30 minutes trying to find the campground and discovered I needed to paddle my gear to the take-out on the left bank just upstream of the dam to facilitate the carry to the heavily wooded campground. The canoe carrier again provided a welcomed alternative to my back as I climbed uphill along a long, rough soggy path to campsite 28 and quickly set my tent and ate dinner. I had luxurious hot shower and went to bed very tired at 8:10 p.m. The sounds of young children eating a late dinner with their parents at a nearby campsite provided some initial disturbance from my slumber but my fatigue quickly overwhelmed these distractions and I soon drifted off to sleep thinking of today's descent and tomorrow's portages. 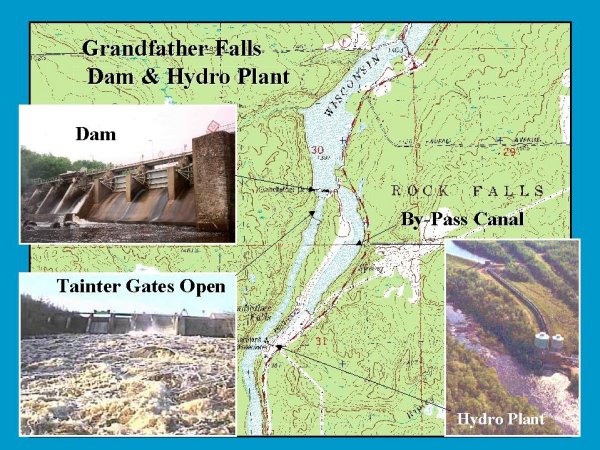