Winds howled through most of the night and then turned to moderate winds with light rain in the early morning hours. I was eager to break camp at 4:05 a.m. and cross the flowage before a resurgence of the westerly winds. I did not want to be wind-bound on this desolate point of land without a fishing pole or book. Shortly after 5 a.m., I began my crossing heading into a stiff breeze from the west.

Osprey nesting platforms resting atop old telephone poles were scattered around the flowage and most of them were occupied by the large bird of prey. I discovered an unoccupied DNR campsite on a large island about a mile and a half northwest of Rainbow Dam. The site was within a 50 yards of a large pine tree that supported and active eagle's nest containing at least one eaglet. The parents watched nervously and whistled at me from a nearby tree as I slowly paddled by. Serious bank erosion was noted throughout the north and westerly shorelines. Attempts to impede the erosive power of winds and waves seem to be met with little success in many shoreline areas.

I landed just to the right of Rainbow Dam at 7:10 a.m. and immediately commenced to setup and load my canoe carrier. The portage was well marked but the put-in below the dam was rather steep. My departure was delayed for some time by the ranting and raving of an old white-haired fisherman sporting waiters and a fly rod. His primary complaint centered on the apparently lack of fish in the tailwater area of which he attributed to a new wastewater discharge to the river from Tomahawk Lake's sanitary district treatment plant. I suggested that the upstream reservoir and varying flows might play a larger role in influencing the fisheries of his favorite fishing hole below the dam. After I mentioned whom I worked for and what I did for a living, he then focused his complaints on the unfair property tax levies his "vacation home" has received. His increased tax burden was in apparent response to Tomahawk Lake's new pollution abatement project. I suspected that this was the real reason he was so upset - no fish and more property taxes to boot! I pointed out to him that my annual sewer and water cost of my "only" residence in La Crosse was substantially greater and didn't offer sympathy. I reassured him that I would look over the area of the new discharge and would report any unusual findings to the local DNR office in Rhinelander. Later, my cursory inspection of the river below this discharge revealed nothing of interest.

Rainbow Rapids provided some excitement two miles below Rainbow Dam. The drop through the class I-II rapids is somewhat difficult due to the abrupt bend in the river at this location. I made the descent poling down the left descending bank and added only a few forest green pigmented markings on hidden boulders along my route through the whitewater section.

The river's floodplain broadened noticeably a few miles upstream of McNaughton. The river cut a slow winding path through the silver maple-dominated floodplain forest. Steeply eroding sandy banks were present on some of the large bends in the river.

Numerous fishing boats were dispersed throughout the upper sections of Rhinelander Flowage on a relatively calm, clear Saturday afternoon. Dense floating leaf bur-reed waved its dull green blades in the sluggish current, as I sliced through the thick vegetation in shallow off-channel areas. Yellow water lilies were in full bloom as were an occasion white-flowered variety. The river and adjacent marshlands with its backdrop of pines, tamarack, spruce and fir in the distant uplands were quite attractive on this warm sunny afternoon. Unfortunately, many boaters failed to slow down in their approach through the narrow marshy channels of the upper flowage and resulted in a bumpy ride and frequently distracted me from the scenic beauty of the area.

The flowage opens up into Boom Lake just upstream of the Rhinelander Dam formerly the site of Pelican Rapids. The skies darkened and the westerly winds increased as I descended the left bank of Boom Lake. Huge 100-year old logs linked together with rusted chain fastenings protruded out of the bank in several areas, the remnants of the old log boom which was used to sort and hold logs for area sawmills and gave this body of water its name. This defunct boom now encompasses a shoreline filled with discarded paper company machinery and a young poplar stand completely devoid of leaves. The latter being due to the voracious foraging of forest tent caterpillars which have been heavily defoliating areas of the northern Wisconsin the past few years.

I landed above Rhinelander Dam at 3:15 p.m. and began preparations for what I though would be a mile long portage. However, a nearby portage sign provided by Rhinelander Paper Company (now Wausau-Mosinee Paper Corp.) indicated that portage assistance was available by calling the guard station. Since I was not eager to take the long walk, I called the number with my wife's cell phone to ask what "assistance" could be provided. A young woman with a friendly voice said she would be right over with a truck to haul my gear and me to the put-in. She felt relieved that this was a party of one for she had not had a lot of experience at this part of her job. The stout woman arrived shortly later in an old pickup truck and within minutes I was on my way. I sat in the bed of the truck behind the cab and tightly gripped the gunwales of my canoe as she quickly meandered her way through a bumpy paper company-owned dirt roadway to Davenport Street. I caught glimpses of the dry boulder strewn river channel through thick shrubbery, which bordered the road on the west side of the channel. For a moment, I imagined myself taking a wild ride through the steep rocky grade of the loud rushing waters of Pelican Rapids. This opportunity can now be occasionally accommodated when the paper company diverts water through the old channel at delight of whitewater kayakers.

I was dropped off at a fishing pier on the left bank immediately adjacent to a new amphitheater near downtown Rhinelander just prior to a light shower. I ducked under the theater's canopy to get out of the rain and called Tony Rinaldi and Ron Becker, friends from 15 years ago when my family lived in the city. Ron, a fellow DNR employee, arrived with a digital camera to take pictures of the vagabond canoeist. Tony, a retired Forest Service employee, brought a can of beer and a Pepsi of which I immediately consumed the former. I was glad to see them and discuss my trip down from Vieux Desert. Due to an approaching storm front, I was anxious to get going again to find the first available encampment below Rhinelander. They assisted me in launching and re-packing the canoe at a nearby fishing float and I was again on my way around 4:30 p.m. They traveled to the opposite side of the river to see me pass by and Ron took another electronic image of the campsite-seeking voyaguer.

A short distance downstream I turned left and traveled up the mouth of the Pelican River a few hundred feet and pulled out at Rhinelander's Wastewater Treatment Plant thinking I could get permission to camp on city land below the plant. However, the operators were gone so I retreated to the mouth of the Pelican and landed below the old DNR Ranger Station on the right bank. Ron showed up again and offered assistance in getting permission for me to camp behind the Ranger Station on a high wooded bank that overlooks the confluence of the Pelican and Wisconsin Rivers. He could not reach anyone from the DNR that could approve the encampment. So, Ron came up with an ingenious solution. He called the local police department and explained who he was and provided matter-of-factly that, "we have a person doing a survey of the river and he'll be staying in a tent behind the old Ranger Station tonight. We just wanted to let you know in case you get any calls." The officer thanked Ron for informing them and he indicated he would advise other officers on duty that night. I thanked Ron again for his help and then sat down a nearby bench to eat a snack and update my journal after he left.

Sometime after 5 p.m., a severe thunderstorm with heavy rain, high winds and frequent lightning forced me to take shelter on the leeward side of the Ranger Station. Branches of red and white pine were sheared from their trunks and fell nearby as dime-sized hail began to fall. Suddenly, I felt sick to my stomach and was very light-headed. I suspected that the beer I had consumed about an hour earlier had somehow interacted with the Ibuprofen I had been taking to ease the pain in my hands had now unleashed its fury in my food-starved stomach. I crouched down on my toes and leaned against the building trying to avoid the sheets of water that showered down from the Ranger Station's roof as my dizziness and nausea increased. The condition apparently worsened for I awoke some time later in a kneeling position without my glasses and my head resting on the muddy soil. My health steadily improved and I was no worse for wear by the time the storm had passed about an hour later.

Around 7 p.m. I set up my tent and afterward went down to the river to see how my canoe had weathered the storm. I pulled it out of the river and dumped out more than an inch of water that had accumulated during the downpour. A few minutes later, two ladies in their mid-30s came down to the river to fish. They were quite knowledgeable about the river and explained that they had previous success in fishing the Pelican's mouth, especially after rainstorms. I wished them luck and headed back to my tent to finish today's journal entry. Ron and his wife Karen and their dog stopped by at 8:15 p.m. to verify that the storm hadn't blown me away. We exchanged information on the severity of the storm and they politely left in a few minutes as they could see that I was getting ready to call it a day for I was tired from a long day of paddling. I thanked them for their concern and eagerly headed for bed after they departed. 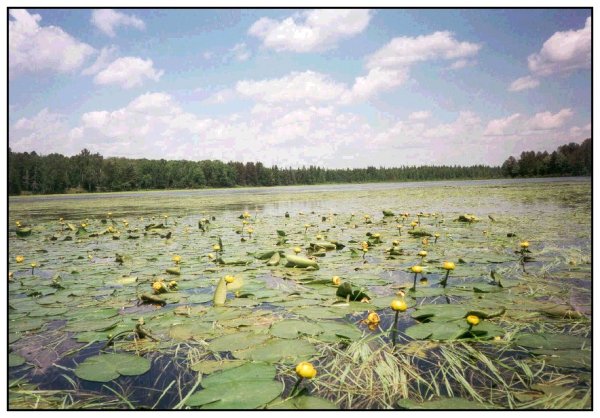