Hazy orange eastern skies provided a striking sunrise as I broke camp at 5 a.m. I was underway on calm waters at 5:45 traveling the right bank observing the ugly scars left by the earthmoving equipment for the widening and straightening of Highway 60. The river was brown with no hint of algae like that observed upstream in riverine pools and backwaters.

By mid-day, the weather had warmed considerably and a westerly breeze provided some cooling relief but also slowed my descent to the Mississippi. The Wisconsin's floodplain was inundated by water with the depth increasing noticeably as I approached the "Father of Waters." This damming effect of the Mississippi extended up the Wisconsin several miles. At 12:15 p.m., I glided into the floodplain forest bordering the Mississippi River at the Wisconsin's confluence and marveled at yet another flood event on these great waters in 2001. Although the river's stage was 3 to 4 ft above the floodplain soils, it was still a few feet lower than levels recorded this past April when stage levels were the second highest for the period of record.

Wisconsin's confluence with the Mississippi - "At half-past 3 P. M. we bade adieu to the charming Wisconsin, and to the enjoyment of floating upon a favourable current, having entered upon the broad surface of the Mississippi, where our course was changed to north-north-west, and all our force was wanted to contend against the force of the descending stream. The river appeared at this point to be about 900 yards across; its waters were clearer than those of the Wisconsin, having deposited much of their sedimentary matter during their long course, a great part of which is through primary rocks."

"The Upper Mississippi is here a beautiful clear blue stream, intersected with verdant islands, and very different in appearance from the Lower Mississippi, after it has been joined by the Missouri. The opposite shore is composed of high cliffs, covered with timber, which, not only in form, but in tint and colour, remind you very much of Glover's landscapes of the mountainous parts of Scotland and Wales… I consider the Wisconsin territory as the finest portion of North America, not only from its soil, but its climate. The air is pure, and the winters, although severe, are dry and bracing; very different from, and more healthy than those of Eastern States. At Prairie du Chien everyone dwelt upon the beauty of the winter, indeed they appeared to prefer it to the other seasons."

I celebrated my arrival to the Mississippi by calling my wife and my mother to let them know I had successfully descended the Wisconsin. Mom was surprised to hear from me since she didn't think my cell phone would be operable at this remote location. These electronic inventions are unbelievable and are now easily taken for granted. Just imagine what Marquette and Joliet would have conveyed back to the Governor of New France had they had this electronic wizardry when they "discovered" the Mississippi in June 1683. The feeling I had though jubilant, would have paled in comparison to the expression of joy these historic travelers would have described during their voyage of discovery. After I announced my current position and intentions to my mother and shared some feeling of success, we chatted briefly and described what each other was having for lunch. Times have changed.

I ascended the right bank of the Mississippi to Prairie du Chien via Garnet Lake, Rotten Slough and Hunters Channel. This course avoided the stronger currents of the main and secondary channels that ripped along at more than two feet per second. I next traveled up St. Feriole Slough, rounded the island and landed at the beach just upstream of Villa Louis at 3 p.m. After 13 days and 430 miles, including 27 portages around 28 dams (1 natural and 27 artificial), I was ready to pack up at head home to La Crosse.

As I prepared my gear for my ride home, Bill Hubbard, local river rat, commercial clamer, riverboat pilot, business owner and machinist stopped by to see where I had been and was going. I was surprised to learn that Bill had worked at the John Deere plant in Horicon for several years and knew my father and brother-in-laws who were managers at this facility. Bill described a lower Wisconsin River canoe trip he took with friends many years ago starting at the Dells and ending at Prairie du Chien. I complained about the bad boat waves from commercial traffic in the upper and lower Dells. He dismissed my complaints about the waves and offered "at least you had good flow." I agreed, but suggested, "it would have been even better with less headwind." He departed after I laid down to take a nap in the shade of a small tree on the former fur trading grounds of Fort Crawford and Villa Louis and waited for a rendezvous with Beth.

"For over four hundred miles, the Wisconsin, though a river superficially tamed by the dams along its central portion and the reservoirs on its tributaries, is still essentially a wilderness stream, but quite now, aging, seldom rising to the flood stages of early years, pastoral and beautiful where it flows slowly down between the hills that enclose its valley to give itself through the Mississippi to the sea." 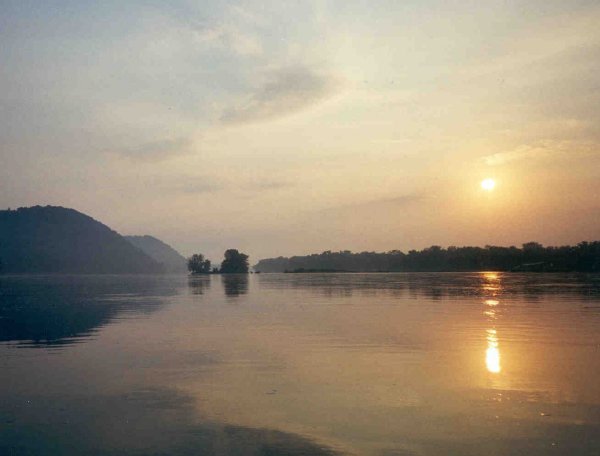