I reached Lake Wisconsin's Tipperary Point at 8:18 a.m. Moderate trichomes (filaments) Aphanizomenon gave the water a blue-green appearance. The weather was still relatively calm so I pointed my bow across the big waters and aimed for a shoreline west of the Pine Bluff peninsula about three miles away. The lake's waters were relatively calm as I landed along the left bank at the Merrimac Ferry crossing at 9:40 a.m. I was greeted by a middle-aged couple from Illinois who were waiting with their Harley to take the ferry to Merrimac as I got out to stretch my legs. They inquired about my journey and wondered where I was heading. I was surprised to learn they were heading to La Crosse for a brief visit via the backroads of southwestern Wisconsin. I wished them a safe a scenic journey as they prepared to depart on the ferry. By the time the ferry arrived from the opposite side of the river, the southerly wind had picked up to 10 to 15 miles per hour and provided some resistance on my four mile run down to Prairie du Sac Dam, the last dam on the Wisconsin.

Boating chronology of Lake Wisconsin - Fishermen were on the lake until the wind increased to about 10 miles per hour at 10 a.m. Then, recreational runabouts and pontoon boats started a steady procession up and down the lake and added considerable wave height to the wind-driven surf. At about 11 a.m., personal watercraft were out in full force and wandered throughout the lake in search of larger waves to jump. I exited the lake about half past noon as numerous touring boaters descended to Prairie du Sac Dam to witness the sounds and fury of the Wisconsin. They came in all forms of powered boats to observe the huge spray of water rising up from the tailwater area on the right side of the dam, the result of cascading water through four opened tainter gates.

The roar of water was deafening as I hauled my gear to the flooded tailwater area on the left side of Prairie du Sac Dam. The apron of the dam had vertical concrete walls that directed the deluge from the opened tainter gates almost vertically about 40 feet into the air creating quite a spectacular sight and sound. The tailwater area was excessively turbulent with huge standing waves and strong dangerous eddies. In my initial decent through the class III rapids, I pierced a four-foot standing wave without the aid of my full spray cover. The river water rushed over my bow cover and into my lap and I shrieked with excitement as the cool waters quickly soaked through my pants. However, the addition of the unwanted ballast provided considerable instability to my canoe and I quickly but carefully directed the canoe to the nearest shore. I beached the canoe and returned several gallons of water back to the river. The near sinking was a fitting and exhilarating end to the dammed portion of the Wisconsin. Considering the rapids of the upper Wisconsin, the wind-swept waters of Petenwell and Castel Rock flowages, the inconsiderate boaters in the upper Dells, I was fortunate and thankful to have made it this far without more disastrous encounters with the Wisconsin.

The song of a river ordinarily means the tune that waters play on rock, root and rapid…The life of every river sings its own song, but in most the song is long since marred by the discords of misuse."

I observed about a dozen canoes on my one-mile run down to the sister cities of Prairie du Sac and Sauk City. I made a brief stop at Sauk City to buy unhealthy snacks at the Kwik Trip store on Highway 12 and an opportunity to exercise my cramped leg muscles and was back on the water by 2:45 p.m. About a quarter-mile downstream of Sauk City, the abutments of an old railroad bridge block the river's flow and introduced dangerous eddies and moderate-sized sluice holes just below the support piers of the bridge. I tried to shoot through carefully on the right side of the river, but was pulled back upstream towards the right pier where the water surface was lowest. This unexpected heading presented some excitement for a few seconds while I increased my paddling effort and soon overcame the whirlpool-like depression and was heading downstream aided by strong rushing currents.

Hundreds of sunbathers were using the infamous Mazomanie beach just across the river from Ferry Bluff. Although most appeared to be wearing swimming suits, there were quite a few individuals, mostly men, wearing no clothing at all. The controversy over this beach has increased since my last visit three years ago with at least one state legislator and other individuals requesting that the DNR, the landowner where this exhibition is occurring, take action to halt this activity. Although the shoreline vista is appalling, I have greater concerns over the potential garbage and human waste left behind by the large congregations that are attracted to this site on warm summer afternoons.

Strong headwinds slowed my southwesterly heading in the late afternoon and I was beginning to get frustrated with the wind until I met up with the tail end of a large canoe party just upstream of Arena. I then concentrated on catching the last canoe as it weaved back and forth in an inefficient downstream heading. Soon, the young man and woman canoeists realized that I intended to pass them and I heard them say to each other in low voices that, "we can't let a solo canoeist beat us," apparently in response to their intended take-out a few miles down river. These were fighting words so the race was on! They headed straight down the middle of the river in the strong current but fought moderate southwesterly headwinds. I traveled the left descending bank where the currently was sluggish but the wind stress was less. I slowly gained on them and eventually past them after a fifteen-minute battle. Thirty minutes later they were about a quarter-mile behind me and were being towed to their intended take-out by a personal water craft. Apparently their overdue arrival at the landing warranted a recovery effort by the outfitter who provided them their canoe. Imagine being pulled back to the take-out in full view of fellow canoeing companions waiting on shore. I can't think of a more humiliating defeat!

I finally grew weary of paddling and with the threat of rain, pulled out onto a sparsely vegetated small island shortly after 6 p.m. The island was located below a large bluff on the right bank about a mile below Cedar Island (near Arena) and several miles upstream of Spring Green. The campsite had seen heavy use by humans as evidence by shrouds of toilet paper and white excrement protruding through the sand in many places and presented a disgusting environment for camping. However, it was too late in the day to seek out other encampments so I cleaned a spot to layout my ground tarp and set up my tent for the evening. 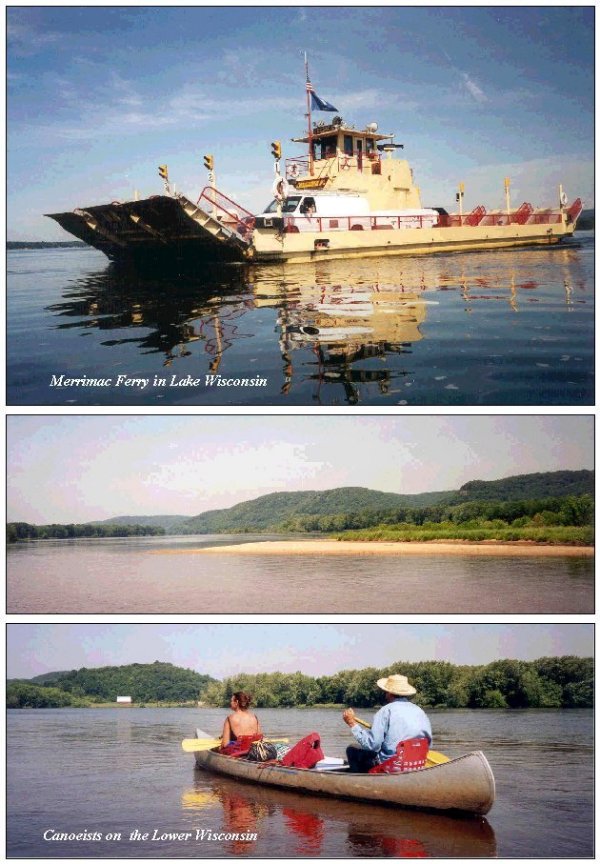