I was up at 5 a.m. gathering gear and repacking the tent after Beth returned to the rear of the Caravan. The canoe was fastened to a collapsible canoe carrier, which had recently been purchased for this trip's many long portages. My gear was placed in the stern of the canoe and after saying my good-byes to Beth I headed down the narrow quarter-mile long path to the lake, pulling the canoe behind me. The ease at moving the heavily loaded sixteen and half foot long fiberglass canoe (Wenonah Prism) through the winding heavily wooded trail was reassuring and provided training for the portages in the days ahead. I was just preparing to launch the canoe into the lake when Beth appeared from the boat launch parking lot with my much-needed SPF 30 sunscreen. After a few pictures and a second goodbye, I was finally underway at 6:30 a.m.

Lac Vieux Desert - "This name means Lake of the Old Clearing. It is derived from the Chippewa name of the lake, which is Gete Kitigan… The origin of the name was a clearing on the large island in the lake. Lac Vieux Desert possess much historic interest because in close proximity to it, if not upon its shores, services of the Christian Church were first held in Wisconsin."

Several musky fisherman in aluminum hulled boats were plying the smooth cool waters adjacent to moderate bulrush stands a few hundred feet off shore. Long narrow piers jutted out into the shallow littoral area from moderate shoreline development along Lac Vieux Desert's western shore. Pondweeds, bur-reed, bulrush and yellow water lily were common, the latter being a few days away from flowering. The water was very clear with an estimated a transparency of at least 8 to 10 feet.

A short 50 foot portage on the right bank was required at the lake's outlet where a low head dam artificially raised the lake's water level a few feet - surplus water to power downstream hydrodams during periods of drought. About 10 cubic feet per second (cfs) were being discharged from the weir which provided just enough water to float a canoe in the tailwater area. The staff gage below the dam read 0.6 feet and the water levels appeared several inches below normal based on higher waterlines etched on shorelines and the dam. Apparently, the Wisconsin Valley Improvement Company, the entity that controls the dam, was holding back water to raise the lake level which has been recovering from a prolonged period of drought. I was just preparing to leave the dam's tailwater area and head down the Wisconsin at 7:15 a.m. when I returned to the put-in to top off my 2-quart canteen with cool water from a nearby well. I thought it best to take advantage of this opportunity since I didn't know when or where I would obtain future supplies.

I returned to the canoe, extended the length of my aluminum pole and began pushing and guiding the canoe downstream from a standing position just behind my center seat. Huge beds of relic mussel shells were distributed across the shallow pool below the dam. Within minutes I came to my first road crossing where I thought I would have to make another portage. However, I discovered the water level was low enough for my canoe to pass through the long 3-foot diameter culvert as long as I was out of the canoe. So I exited the canoe and followed the canoe through the dark, cool cobweb-filled air hoping the culvert was free of major obstructions. I was soon underway again after I cleared my face of cobwebs and dusted spiders from my clothing.

Numerous beaver dams were encountered on my run down to Highway 45. Fortunately, I only had to portage one of these dams where busy beavers constructed a substantial dam across the channel and floodplain, which resulted in raising the water level by at least 2 feet. Other dams were easily passed over at center channel with a moderate push from my pole. I poled for about the first hour and half below Lac View Desert's dam until the wind became too strong and the bottom too silty, which made poling difficult. I then resorted to paddling. I finally reached Highway 45 at 10:08 a.m. after a long serpentine-like traverse through the narrow floodplain corridor. Water depths were adequate throughout the reach and were likely aided by beaver dams. Overall, the channel was wider than I had expected and I was relieved that I did not have to do any walking or contend with overhanging alders. I was pleasantly surprised by the number of deer that were startled from their morning feeding on aquatic plants along the stream and adjacent wetlands.

The river's current velocity picked up a bit below Highway 45 due to the increased gradient and lack of beaver dams. A long stretch of runs and minor rapids greeted me on a narrow alder-covered stretch just upstream of the Portage Creek confluence. I decided to pole through these while sitting since overhanging branches prevented me from standing and water depths were too shallow for efficient paddling. Portage creek entered from the right at the base of a long rapids and contributed substantial flow and reddish-stained water to the Wisconsin. The flow from this tributary carried two or three times the flow of the Wisconsin and had a stream channel noticeably larger as well. One wonders why this tributary was not considered the true source of the river since it carried so much water and gave the Wisconsin its distinctive tea-like color.

I reached Rummels road at 1:43 p.m. about 15 winding river miles below Lac View Desert. The river is actively eroding a 20-ft tall sandy bank just downstream of the road crossing on the left side - the first obvious source of bed load (river transported sand) for the Wisconsin.

The Wisconsin becomes noticeably wider below Tamarack Creek, another major dark-stained tributary which entered from the west about 1.5 miles upstream Highway K near Conover. The river's floodplain increased to about a quarter-mile below Conover and occasional oxbows and abandoned channels scar the wetland landscape. The current velocity was moderately fast and infrequent boulders, containing multi-colored scratches marking previous canoe encounters, lay hidden just below the surface. I managed to avoid most of them when paying attention to canoeing and not the scenery. However, I added my share of green epoxy paint to several of the large stones during my descent through this reach since beautiful vistas provided welcomed detractions from my labor.

I reached Buckatabon Creek at 4:57 p.m. and found a small campground and picnic area on a high bank at the junction of the two streams. A narrow wooden bridge crossed the creek a few hundred feet upstream of the confluence. I landed just below the bridge on the left side and walked up a moderately steep bank to reach the campground. A Vilas County Park sign indicated 'a permit was needed for camping unless arriving by water.' Since I had met this requirement I hauled my gear up the bank and tied the canoe to the understructure of the bridge. The clear cool creek water provided a refreshing bath before setting up camp and eating dinner. I camped under a grove of large red pine trees that overlooked the Wisconsin's floodplain 30 feet below. I awoke briefly during the night at a startling noise from the opposite side of the river. A glance out my tent's window indicated thousands of blinking fireflies dancing over the river and adjacent wetlands, but the source of the sound remained undiscovered. I easily fell back to sleep as light rain began to fall. 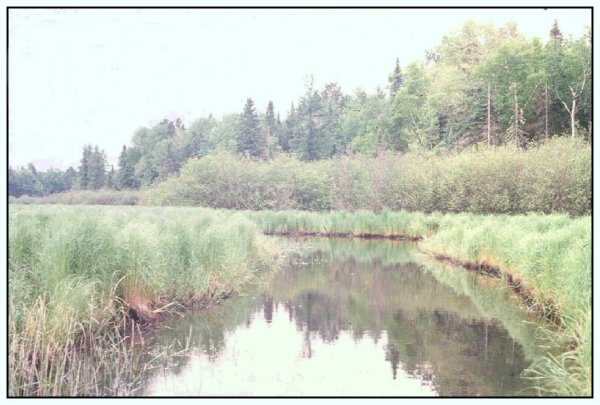