My roots are in the Rock River watershed. I was born in Madison, Wisconsin, which lies in the Yahara River basin, a sub-watershed of the Rock. I grew up at the base of the Great Marsh at Horicon where I learned to fish on its banks, camp on its islands, hunt in its cattails, swim in its sloughs, and skate in its backwaters. This is also where I had the independence to operate a skiff, canoe or powerboat long before I could drive a car. To these indulgences, I must thank my parents, Uncle John and Aunt Jessie.

I learned to read and write at St. Malachy's grade school that lies on a hillside overlooking the Rock just upstream of the Horicon Dam. Recesses where spent hitting baseballs, kicking balls, and throwing sticks and stones into the river from the adjacent playground. In winter, if the ice conditions were safe and the weather not too cold, the nuns allowed us skate on its frozen surface on special occasions. Otherwise, we would build snow forts in snow piles dumped by the city at the bank of the river.

In my later years in grade school, weekends and vacations provided opportunities for unsupervised instructions in the natural and physical science of the marsh and river. Then questions like the following were raised: Where do northern pike live? When is the best time to catch bullheads or walleye? How long will carp live when removed from water? How far down do you sink when you try to walk in the marsh? How big of raft should be made to cross the river with your friend? How much ice is necessary to support a 110-pound boy? How much clothing is necessary to ward off the cold northerly winter winds when biking through the ice-covered marsh? Whether the questions were trivial or life threatening, the answers were learned with eager enthusiasm.

The Marsh also offered early employment opportunities when John and Rich Christian and my brother Andy and I entered into the snapping turtle business. We often designed and constructed our own traps. Then huge carp would be speared from the Marsh's vegetated backwaters to obtain bait needed to attract these reptiles. Once the prized turtles were captured, they were hauled to a German immigrant in Mayville where they would become the main ingredients in soup. We received ten cents a pound live weight for our labor. Although the remuneration was meager considering our expenses and time, the enjoyment of the activity was pronounced and worth the effort.

I was fortunate to obtain summer employment working for the Department of Natural Resources at Horicon during the early 1970s while on summer break from college. Here I was formally exposed to the aquatic and fishery sciences. I collected water and macro invertebrate samples and participated in a major Rock River carp eradication program. I also had the good fortune to work with Richard Vogt, noted state herpetologist, in trapping and marking painted and snapping turtles to assess their populations and response to drawdown, this time for considerably greater pay.

Of all the memories I have had of the Marsh and the Rock, the most vivid seem to be when I was least active. These include wakening to the early morning sounds of the marsh from inside an old canvas tent on One Mile Island, drifting in a duck skiff in a backwater bay on a warm moon-filled night with my girlfriend (now wife) or watching a brilliant sunset from Quick's Point. After some absence, I now return to the Marsh and the Rock to rekindle these memories. 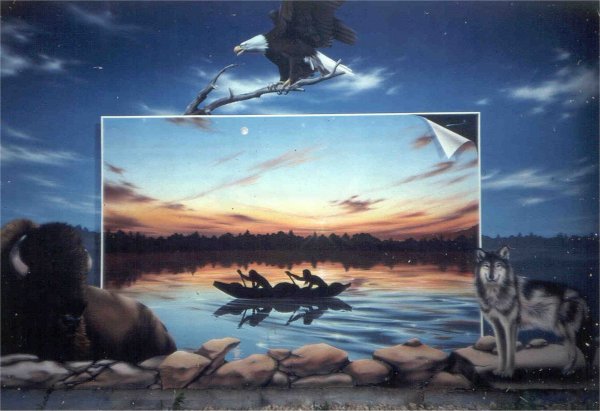 "How happy the Indians must have been here!Its not long since they were driven away, and the ground, above and below, is full of their traces."