A light fog drifted over the calm river surface as I sneaked away from my campsite at 5:55 a.m. The cool misty air was thick enough to prevent a clear view of the opposite shore about a quarter mile to the west. I felt relieved that my stay did not bring the wrath of the property owner or a visit from the sheriff department. However, my intrusion into the floodplain habitat did seem to upset the local fauna that passed through camp all through the night and into the early morning hours. I had visits from beavers, raccoons, barred owls and herons. It was also instructive. For the last several days I had observed many stalks of corn in the river, especially above sweepers or caught on other shoreline vegetation, but I couldn't figure out how they arrived in the river. Well I now know that raccoons cut the stalks and haul them to the river for soaking and washing before tearing into the ears of corn. The furry masked marauders were dragging their harvest through my campsite from midnight until 3 a.m. They chattered wildly at my tent since I apparently blocked their thoroughfare to "their water". This activity from these critters startled riverbank beavers that were swimming along the shoreline and responded by providing a sharp slap of their paddle-like tails in the still night air. Barred owls came and went all night long seemingly taking turns to keep me awake with their many renditions of "who cooks for you, who cooks for you, who cooks for yooouuu aaallll".

It was a very calm paddle down to Dixon, boyhood home of Ronald Regan and battleground of Abe Lincoln. I took out on a steep 3-ft high grassy bank just above the long spillway formed by the Dixon Dam. As I was unloading my canoe, I managed to impale my right hand with the rusty barbs of a treble hook that was dropped into the grass by some careless fisherman. After flushing the wound with peroxide and water, I continued preparing for the carry to the tailwater area. The take out was adjacent to bike path which would lead me to two sets of stairs to get to the river below the dam. A local gentleman in a business suit stopped by to offer assistance with the canoe. He had been watching from his house that borders the river. I gladly accepted his offer since the first set of stairs was rather steep and my shoulder was still sore from yesterday. A five-foot high rock wall extended down stream of the dam for several hundred feet and required carrying the canoe to the second set of stairs just below the Highway 26 bridge.

"Dixon was named after a ferrryman who operated the important crossing in the mid 1800s… It being for years the only point where the river could be crossed by ferry. Dixon was an important landmark to the settlers of the southern half of Wisconsin who desired to go to Chicago, as with any in their own territory."

Dixon to the Mississippi - " This beautiful stream flows full and wide over a bed of rocks, traversing a distance of near two hundred miles, to reach the Mississippi. Great part of the country along its banks is the finest region of Illinois, and the scene of some of the latest romance of Indian Warfare. To these beautiful regions Black Hawk returned with his band to pass the summer, when he drew upon himself the warfare in which he was finally vanquished. No wonder he could not resist the longing, unwise though indulgence might be, to return in summer to this home of beauty."

Private Abraham Lincoln returned to the Dixon ferry after his discharge from the Black Hawk War - "Lincoln was not proud of his part in the Black Hawk War. Joking about it in Congress in 1848 when former Black Hawk veteran, Governor Lewis Cass, was a candidate for president, Lincoln said: "If General Cass went in advance of me in picking whortleberries, I guess I surpassed him in picking onions. If he saw any live, fighting Indians, it was more than I did - but I had many bloody struggles with the mosquitos; and Although I never fainted from the loss of blood, I can truly say I was often hungry."

Dixon-Sterling Reach - "The land along the river banks is a flat prairie some half-mile in width, with rolling country beyond, sprinkled with oak groves. The banks are of black, sandy loam, from twelve to twenty feet high, based with sandy beaches. The shores are now and then cut with deep ravines, at the mouths of which are fine gravelly beaches, sometimes forming considerable spits. These indicate that the dry, barren gullies, the gutters of the hillocks, while innocent enough in a drought, sometimes rise to the dignity of torrents… so often described in the journals of early travelers through this region, as the dark and raging Rock."

The water current decreased dramatically in Lake Sinnissippi, the second such named lake on the Rock. The decreased current was a result of a substantial increase in the river's width in the lower end of the pool formed by the first dam at Sterling/Rock Falls. The waterfront homes bordering the lower pool were numerous and quite diverse in style and size.

I reached the upper dam at Sterling/Rock Falls at 12:30 p.m. Several minutes were spent gazing over the old feeder canal on the left bank that diverts water from the Rock 29 miles to the Hennepin Canal, a historic waterway that once provided a 75-mile hydraulic linkage between the Mississippi and Illinois Rivers. The feeder canal provided the necessary head of water to make the east-west waterway possible. The Hennepin Canal, also known as the Illinois and Mississippi Canal, reduced the river navigation route from Chicago to Rock Island by more than 400 miles. This waterway became operational in 1907 and was discontinued in 1951 having succumbed to cheaper rail transportation costs and becoming too small for expanding barges and commercial tows. In 1970 the canal's ownership was transferred from the federal government (U.S. Corps of Engineers) to the State of Illinois and is now managed as a state park by the Illinois DNR. The canal was the first American canal built of concrete. Engineering techniques learned here were applied to the Panama Canal. A unique feature of the original system was the construction of nine aqueducts, six of which are still present today (Hennepin Canal Parkway Brochure, Illinois DNR).

A relatively new power dam has been added to the Rock River on the left bank just below the feeder canal. A steep heavily vegetated bank makes a put-in below the power dam impossible. I paddled over to the opposite bank to look for a take-out. I found a small opening in some thick underbrush and crawled out over a boulder-strewn bank. I then made a few hundred yards portage to the turbulent and rocky tailwater area. The bank was covered with remnants of fishermen's trash including empty bait containers and pop cans, fishing lines, hooks, broken poles and pungent catfish bait that was left rotting along the bank. It was truly disgusting and I decided to postpone my lunch break for more pleasant surroundings.

It was a short half-mile canoe trip to the next downstream dam. The take-out is at a boat ramp located on the left descending bank. It was a relatively easy short walk over a small hill to get the tailwater area, which was occupied by several fishermen seeking catfish. Huge rusty red manufacturing or warehouse facilities are present along the RDB and makes for another unattractive shoreline below the second dam. The current speed picked up nicely below the dam and I was quickly on my way to Crow Valley Campground about eight miles downstream.

Steep, twenty-foot high, silt/clay banks are a common shoreline feature in this reach and serious erosion is evident in many areas. I landed at Crow Valley Campground shortly after 4 p.m. The campground is in the Rock's floodplain and is located on a wide unprotected outside bend of the river. Jim Ottens, the proprietor, indicated he lost fifteen feet of his shoreline in four years but has gained sixteen inches of elevation from silt deposits during floods. A farmer on the opposite bank influenced this geomorphologic process when he filled in a secondary channel about five years ago. Now the Rock puts all her force on the largely unprotected right bank where the campground is situated. Jim noted that my riverside campsite would be three feet below the water surface experienced this past May. However, since my site was more than three feet above the present water surface and there was no forecast for rain, there was no reason to seek a campsite on higher ground. I retired early after a refreshing hot shower. 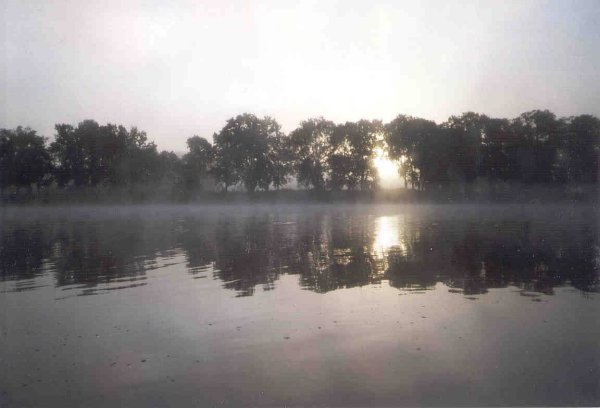