I departed the field station at 6:25 a.m. after leaving a thank you note for Don and verifying the DNR field station's office door was locked. The weather was calm and cool and a slight patchy fog was spread out over the Rock. A moderate bloom of algae, possible the blue-green alga - Microcystis, was present in a thin layer at the river's surface. The shoreline down to Indianford Dam is heavily developed with houses, cottages, shacks and boathouses. Numerous docks, pontoon boats and jet boats accompany the dwellings. A densely packed trailer court on the LDB immediately above the dam provides an unsurprising end to this over-developed impoundment.

I landed at the Indianford Dam take-out at Hwy M Bridge at 7:25 a.m. The take-out was on the RDB and was prominently marked with a large red and white sign. Again my canoe map was wrong having placed it on the opposite bank below Hwy M. It was a relatively easy 100-yard portage under the Highway Bridge to the put-in below the powerhouse. Three fisherman and one women were on hand to observe the carry, which required three trips. A young Hmong couple reported having success catching white bass while the other two elderly men had not caught anything since they had just arrived a few minutes earlier. The elder of these two gentlemen was a retired farmer who had once farmed land adjacent to the mouth of the Bad Axe River in Vernon County Wisconsin, just south of La Crosse. He went on incessantly about how great the fishing was on the Mississippi and had many fishing stories to tell, all of them involving record size fish or catches. These fishing tales seemed to be met with some justified skepticism from the other elderly fisherman, a retired Los Angeles police officer. I thought it odd that the retired farmer was fishing the Rock when according to him, he had the best fishing holes right in his back yard in western Wisconsin. Perhaps he had tired of catching fish and needed a change in scenery or more likely, a new audience for his discourse.

Unfortunately, I managed to canoe past the confluence of the Yahara River without notice. I discovered my mistake about one-half mile below its entry to the Rock which according to my map, enters from the north about 1.5-miles below the Indianford dam. I attempted to canoe back upstream to find this tributary but the Rock River's current was strong enough to quickly change my mind. Out of curiosity, I asked a nearby bank fisherman where the Yahara River comes in. He had never heard of this river. I then came across a trio of catfish fishermen in a small boat and asked a similar question. Two of the fishermen looked puzzled and the third asked, "isn't that the river that drains the Madison Lakes?" They seemed surprised when I explained to them that the Yahara does indeed pass through the Madison Lakes and enters the Rock just upstream of our location. After this exchange I didn't feel too bad about missing the Yahara River's inflow since even the local fisherman where unaware of its existence or location.

I now follow the strokes of Ruben Gold Thwaites, early state historian and avid canoeist, who traveled from Madison to Rock Island with his wife by way of the Catfish (now Yahara) and Rock Rivers in May of 1887. He provided a delightful accounting of their travels and experiences as they made their way towards the Mississippi, some of which is repeated below.

"The Rock River is nearly a quarter of a mile wide at this point (Yahara River Confluence), and comes down with a majestic sweep from the north, having its chief source in the gloomily picturesque Lake Koshkonong. The banks of the river at and below the mouth of the Catfish, are quite imposing, rising into a succession of graceful, rounded-topped mounds, from fifty to one hundred feet high, and finely wooded except where cleared for pasture or as the site of farm-buildings. While the immediate edges of the stream are generally firm and grass-grown, with occasional gravelly beaches, there are narrow strips of marsh at the bases of mounds, especially on the left bank where innumerable springs send forth trickling rills to feed the river..."

I reached the first dam at Janesville about noon in bright warm weather and took-out on the RDB. This route required crossing a very busy street and following a pleasant bikeway along the river. The motorists were in an apparent hurry for lunch or mid-day business and were rather intolerant of my slow pace across the street with my heavy packs and canoe. The put-in was very steep and the footing was tenuous due to the presence of loose riprap. I almost dropped the canoe as I carried it down the embankment while a nearby teenager watched without offering assistance.

The city of Janesville has added a massive low-lying bridge or parking lot in the downtown area that smothers the Rock for about a hundred yards of shoreline. The huge concrete monolith is supported by many one-foot diameter steel posts, which provide a convenient trap for logs, floating debris and wayward boaters. Although this amenity must seem convenient for motorists and picturesque for pedestrians, it provides a serious hazard for canoeists. I entered the dark cavernous tunnel with some trepidation knowing what might lie ahead. As my sunglass-shaded eyes were tying to adjust to the extremely low light levels under the bridge I heard a loud whooshing sound above me on my starboard side. The noise shattered the still, humid air and scared the daylights out me. My heart was racing and pounding loudly and I quickly had doubts about the successful completion of my journey. The sound was followed instantly by a huge discharge of water from a large pipe mounted in the ceiling of the bridge. Fortunately, the unidentified deluge missed the canoe and the startled occupant. The remaining traverse under the bridge was without incident and I was relieved to see light of day on the downstream end.

The second dam at Janesville required a portage on the RDB along a steep, rocky enbankment. Bob Hedgecock, a talkative elderly fellow, and a young bike cop broke away from their conversation at a nearby bike path and gladly offered assistance as I stepped out of my canoe. I launched into the turbulent tailwater area at 12:55 p.m. and was quickly shot downstream by the fast running water which extended downstream for about one-half mile.

The Rock is divided into two, narrow, swift flowing channels by a small island above Bass Creek near Afton. Strong current buffeted the upstream end of the island and overtopped its banks. Previous flood flows have dropped off large logs, a dilapidated hunting blind and other flotsam from Janesville at this constriction. A large, poison ivy-covered campsite was present on the downstream end of the island. The campground appeared to be well used based on the presence of worn ground, log chairs and a canvas awning hung from trees. I even found a few cooking utensils and a small amount of change on a table-like log. A half-gallon of Coleman lantern fuel was stored at the base of a nearby tree. I left the entire area intact and selected a mosquito-infested campsite in the island's interior after adding a quarter to the pile of change, remuneration for the use of their log table to make my dinner.

The southwestern tip of the island is guarded by on old duck blind. Chalky white mussel shells covered the eroding shoreline just upstream of the blind. I spent several minutes scouring the exposed midden to see how many different shells I could find. The diversity seemed to be quite low since only a few different species were apparent. It is unknown if this site represents casts off from the pearl button industry or a garbage heap from Native Americans who probably frequented this unique island prior to European settlement. 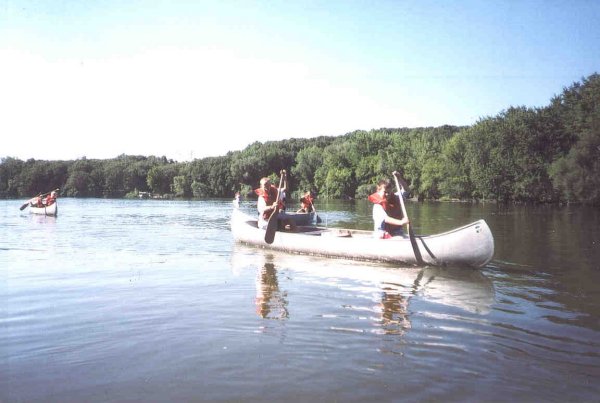