I was up by 5 a.m. to start the long run down to Jefferson. It was a cool morning with a thin blanket of fog over the Rock and delta of the Oconomowoc River. The air temperature was only 12.4 C (54 F) and the Rock River's surface temperature was 25 C (77 F). Dissolved oxygen concentrations were still very low in the Rock yielding a value of 0.3 mg/L upstream of the Oconomowoc River inflow. Hundreds of carp sought refuge in the slightly higher oxygenated Oconomowoc River delta, which had a DO of 2.4 mg/L, but still well below the state standard of 5 mg/L. No live carp have been observed in the Rock the last day of canoeing and I suspect the deoxygenated water has either killed them or driven them off to more oxygenated tributary streams. The water transparency of this tributary easily exceeded 50 cm, the maximum length of my measuring tube.

The river elevation drops several feet below the Hustisford Road Bridge at Pipersville. I decided to scout the resulting rapids from the bridge and was compelled to tie my packs down before entering the rapids. Several snagged trees near the bridge resulted in quick drop and small standing wave. The rest of the rapids were easy and I quickly sped downstream towards Watertown at several miles per hour.

I reached the first dam at Watertown at 8:30 a.m. and looked for the portage on the LDB as directed by my canoe map. However, there was no clear passage on this side of the river due to the presence of a hydroplant, chain link fence, and steep hillside. I then spied the take-out sign hidden behind some trees on the opposite bank. The raging Rock roared over the dam's spillway and created a turbulent froth for some distance below the dam. The drop in head was about eight feet and the tailwater area provided a fast run for several hundred yards downstream.

I refreshed my water supply at a park on the RDB about a mile and a half below the dam. Two young boys were fishing at a second park further downstream along the RDB above Highway 19. They proudly showed their morning catch of catfish in response to my inquiring of their fishing success. I am now seeing more fish activity in the river. This response is likely due increased oxygen levels provided by the reaeration at the upstream spillway and rapids.

I found a phone at a local grocery store in downtown Watertown and called home at 10:30 a.m., nobody was home so I left a message that all was well. I also left voice mail for John Christian to report the fish kill and below normal DO levels observed between Hustisford and Watertown.

Three river fountains greeted my arrival at Watertown's second dam at 10:45. River water is sprayed 20 to 30 ft into the air at three locations across the channel a few hundred feet above the dam. I landed on the LDB and made the carry over a nice walkway and bike path. However, the take-out and put-in were difficult owing to the steep banks and strong currents. The river drops about 10 ft over the dam's spillway. The turbulent froth belched forward a strong odor reminiscent of some upper Wisconsin River pulp mills. I then thought the fountains were someone's wastewater discharge (known as a zone of immediate dilution) however, a local resident said they were added to "improve the beauty of the river". Perhaps the smell was related to the poor water quality observed further upstream, however a similar odor was not noticed below the first dam two and half miles upriver.

White blocks of foam were scattered across the river about one mile below the second Watertown Dam. Upon further investigation, I found the foam to be emanating from the city's municipal wastewater treatment plant located on the RDB. Pure white foam plugs were bellowing forth from the outfall pipe like toothpaste at 11:38 a.m. Some of the cylindrical blocks were as large as my canoe. The foam was quickly dispersed by the current and moderate southwesterly winds.

The twelve-mile run down to I-94 was mainly undeveloped. Backwater marshes were frequent and often harbored wood ducks and mallards. Arrowhead stands were common and some wetlands contained Phragmities and wild rice. Unfortunately, monotypic stands of the exotic and unwanted purple loosestrife were also quite common in the bottomlands. Several boats of catfish fishermen and women were out on this bright warm afternoon between Watertown and the Interstate 94 bridge. Many reported having some success. No dead fish were observed in this reach, likely in response to the higher DO levels (6 to 7 mg/L).

I stopped for dinner at 4:30 p.m. at the Highway B landing about one mile south of I-94. The wayside had a clear, foul smelling artesian well, which was used to wash my socks, shirt and hair. While cooking dinner, a few boats launched from the nearby landing with eager water skiers. Fortunately, they all headed upstream. After dinner I headed down river in search of a campsite for the night.

After several unsuccessful stops, an open grassy area was found on the LDB about three miles above Jefferson at 6:30 p.m. I walked uphill along a mowed path about one-half mile to obtain permission from the farmer who maintained a largely wooded waterfront and small private campsite along the Rock. As I knocked at screen door of on open porch at the old farmhouse, a small dog announced my presence and a large elderly farmer in an old white T-shirt came to the door to greet me. I explained my trip and desire to use his waterfront campsite. He was very friendly and readily approved my request. He also offered me a ride back down to the river, but I declined knowing that I had disturbed his dinner. I told him I had been canoeing all day and the walk was a welcome relief to sitting. After the tent was pitched at his mowed campsite, I took advantage of his large screened-in tent with lounge chair to record the days activity in cool mosquito-free air. As I reflected on the day's travels, the calm evening was broken by the gentle sounds of two women kayakers and an alarming buzz of an overpowered bass boat.

I canoed 26 miles today and included portaging around two dams at Watertown. I headed for bed at 8 p.m. with storm clouds approaching from the west. My thoughts this evening were of my next major obstacle - the expansive open waters of Lake Koshkonong. 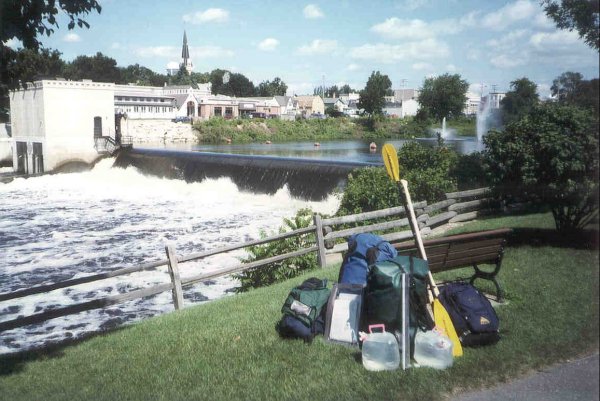