A brilliant reddish-orange sunrise and calm weather greeted me at 5:50 a.m. This seemed like an omen for rain and was confirmed by the forecast from my weather radio. I was on the water by 6:30 and was drifting downstream in sluggish current as I consumed trailmix consisting of cereal, nuts and raisins.

Large islands become numerous about three miles below Erie. Here the river begins to take on the appearance of a "large" floodplain river with a braided network of flowing secondary and tertiary channels. It is perplexing as to which route offers the shortest or deepest passage. I have a bias towards selecting the narrowest channel, which often presents a greater challenge but am usually rewarded with more wildlife viewing opportunities. My crude river maps became useless for traveling these riverine corridors and I tossed them aside and let the river show me the way, just as it did for native Americans for hundreds of years.

The islands have steep muddy banks with occasional patches of gravel. Ice scars on the floodplain's silver maple, basswood, ash and cottonwood trees are quite common on those lining the bank. These scars of spring ice melt and high stages are most apparent on the outside bends where the river's energy is greatest. These attacks on the bottomland forests are typically six to eight feet above the present river elevation.

Below Erie - "The river continues to widen as we approach the junction with the Mississippi… The islands increase in number and in size, some of them being over a mile in length by a quarter of a mile in breadth; the bottoms frequently revolve themselves into wide morasses, thickly studded with great elms, maples and cottonwoods, among which the spring flood has wrought direful destruction. The scene becomes peculiarly desolate and mournful, often giving one the impression of being far removed from civilization, threading the course of some hitherto unexplored stream. Penetrate the deep fringe of forest and morass on foot, however, and smiling prairies are found beyond, stretching to the horizon and cut up into prosperous farms. The river here is a half to three-quarters of a mile broad, but the shallows and snags are as numerous as ever and navigation is continually attended with some danger of being grounded or capsized...Now and then the banks become firmer, with charming vistas of high wooded hills coming down to the water's edge; broad savannas intervene, decked out with variegated flora, prominent being the elsewhere rare Atragene americana, the spider wort, the little blue lobelia, and the cup-weed. These savannas are apparently overflowed in times of exceptionally high water; and there are evidences that the stream has occasionally changed its course, through the sunbaked banks of ashy-gray mud, in yeas long past."

The current velocity slows noticeably below the Highway 92 bridge near Joslin. Here the river becomes wider and is largely free of islands. Hundreds of unattended catfish fishing poles are placed in the muddy banks along both sides of the river. The poles are nothing more than willow stakes, PVC pipes or fishing lines attached to overhanging trees or snags. Each set of poles carries its own color-coded scheme to facilitate their recovery and to mark the territory of the pole's owner. Competing fishermen seem to claim specific river reaches to avoid confrontation. In a two hundred-foot reach, I counted as many as twelve white PVC fishing poles lining the bank. This passive fishing activity was also observed at many upstream sites in Illinois's portion of the Rock, but it seems to be more prevalent below Joslin.

Moderate development has occurred in the pool formed by the Steel Dam at Milan, located just south of Rock Island. The domestic dwellings are typically raised several feet above the floodplain with huge wooden poles, concrete pillars or blocks. No attempt has been made to stabilize the shoreline owing to the wide fluctuation in river levels. I suspect the cost in providing erosion protection would exceed the value of the land and the "improvement" that resides on it.

At a mile west of Green Rock, I met up with the west end of the Hennepin Canal where Lock Number 29 empties diverted Rock River from Rock Falls back into the Rock again. The diversion at Rock Falls down the Feeder Canal and then westward through Hennepin Canal is 63 miles. Interestingly, I estimated my distance down the Rock River from Rock Falls to Lock Number 29 at 57 miles, only 6 mile shorter than the canal's waterway. At first this didn't seem possible, but when you figure in the Rock's meandering and the straighter canal alignments, the similar distances are probably correct.

I stopped to stretch my legs and view Lock 29's construction and surroundings. Several fishermen had rods draped over the high concrete lock chamber while they sat back on lawn chairs waiting for bottom-dwelling fish to grab their stinky baits. One elderly fellow reported loosing his fishing pole yesterday when he turned his back to talk to his fishing buddy. Apparently a huge fish grabbed the bait and took off swimming out of the chamber with his rod in tow. He pointed to the spot in the water where he last saw his cherished rod and reel sink into the dark murky water. I shook my head in sympathy and was careful not to kick his other rod and reel, perched dangerously close to the edge, into the lock chamber as I turned and walked away.

High on the northern bluff stretched out 150 ft above the Rock River lies the haunt of Saukenuk, once the capital of the Sauk Nation and the birthplace of Black Hawk. Saukenuk was of one of the largest Indian villages in North America and was believed to have a populaton exceeding 10,000 about two hundred years ago. However, the site has an even earlier history dating back ten to twelve thousand years ago when Paleo Indians called it home. The area is now preseved as Black Hawk State Park.

"We always had plenty. Our children never cried from hunger; neither were our people in want. Here our village stood more than 100 years during which time we were the undisputed possessors of the Mississippi Valley from Wisconsin to Portages des Sioux near the mouth of the Missouri River, a distance of 700 miles."

The river current slowed to a crawl as I approached the Steel Dam at Milan where I would make my last portage on this trip. The take-out on the LDB was overgrown with reed canary grass. The put-in below the dam was steep with rocky banks. Many fishermen were present but offered no assistance during the carry. The current velocity picked up nicely below the dam and for a half-mile stretch above and below Highway 67 had the appearance of rapids. Dan Salle, Illinois Department of Conservation fish manager, assured me during my pre-trip planning that I would make the passage with no problems. He was correct and the sudden bust of speed was exhilarating as I quickly approached the Mississippi only a few miles away. However, my progress slowed considerably again during my last two miles as the Rock appeared to "tighten her grip" on the canoe. A moderate westerly headwind impeded my descent and the current velocity decreased greatly due to the damming effect of the Mississippi River at the Rock's confluence. It seemed that the last two miles were the longest of the journey.

I entered the "Father of Waters" at 3:05 p.m. just as a light rain began to fall, confirming the early morning forecast. The moisture and dark gray skies did not diminish my sprits as I gleefully headed for the Buffalo, IA six miles down the Mississippi. Intermittent rain fell as I paddled down Andalusia Slough, a secondary channel of the river on the Illinois side. A few ski boats were busy using the protected side channel of the Mississippi and were generally careful in their approach to my small craft. I crossed over into the main channel at Andalusia and landed at the Corps' Buffalo Shores Recreational Area shortly after 4:30 p.m. about 300 miles below Kekoskee and the Great Marsh.

I took a very long hot shower and then called Beth to make arrangements for my return to La Crosse tomorrow. I set up camp in a large, flat grassy area largely devoid of trees. The tent was pitched for the last time under the largest shade tree I could find - a twenty-five foot high green ash. I forgo the more expensive and popular riverside campsites for one removed and isolated from other campers. The campground has the luxuries of a nice sandy beach, shower facilities, flush toilets, firewood, and playground. A ten-minute walk took me to the south side of Buffalo where I found a sub sandwich shop and feasted on a foot-long turkey sub on whole wheat and a strawberry shake, a welcomed break from camp food. I returned to Buffalo Shores in the early evening and was properly registered by the campground attendant. The campground was largely deserted this being mid-week. The quiet and peaceful atmosphere provided ample time for reflection on the journey down the Rock of Wisconsin and Illinois. 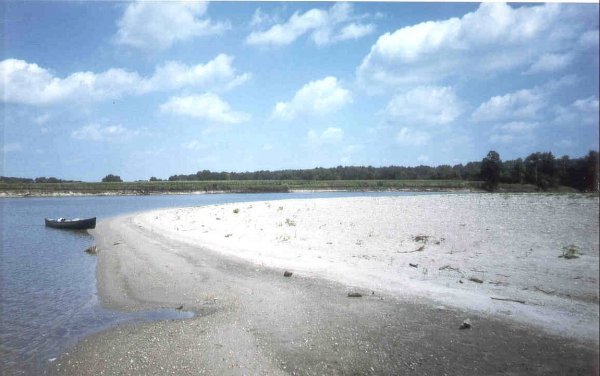