I experienced a noisy evening due the ongoing operations at power plants on the opposite bank. Light cool winds and clear skies greeted me as stepped out onto the dew-covered grass around 5 a.m. The air temperature had fallen to 50 degrees overnight but the river was only lightly covered by fog, likely the result of drier air that had settled in over the Ohio's valley last evening. I shoved off from the bank into relatively swift current at 5:16 a.m. with the eastern skies showing a hint of dawn.

I reached Pomeroy, Ohio (RM 250) at 6:30 a.m. under clear blue skies. The river was calm but continued to propel me quickly downstream with little paddling effort. The city had an attractive waterfront with well-maintained old businesses paralleling the river. I had a strong desire to stop to inspect the downtown first hand and possibly discover a riverside bakery, but I didn't feel safe docking at the city's concrete walled levee, which was being buffeted with strong currents. Just downstream, a riverside café and a McDonalds restaurant offered riverside docking during periods of lower stage, but these docks looked unusable due to the high flows.

Placid river conditions and cloudless skies presented a surreal picture as I approached Ohio Electric Company's Gavin Plant near Cheshire, Ohio (RM 258) just before 8 a.m. Pure white clouds of billowing steam discharged from three smokestacks and two enormous cooling water towers like an erupting volcano and provided a striking contrast to the dark blue morning skies. In the foreground, a mainline tow diligently pushed twelve empty barges upriver in the strong current. The glassy river's surface provided almost perfect reflection of the scene as I drifted underneath an aerial powerline crossing. I could hear the hum of electricity flowing through high voltage power lines as I held my breath to snap a picture of the spectacle (see cover photo).

I took a small secondary channel around the half-mile long Eight Mile Island (distance from Pomeroy) which boarded the left bank just opposite Chesire, Ohio. Mid-way through the island, I was startled by twenty or more vultures that were roosting in small trees near the river's edge. The sudden stealth-like appearance of my canoe also shocked the birds and they feverishly scrambled to leave the dense canopy to the right of my canoe. Wood ducks, great blue herons and numerous songbirds also favored the narrow side channel and were flushed from the heavily vegetated shoreline habitat as I paddled by silently.

Point Pleasant, West Virginia is situated at the mouth of the Kanawha River, a major tributary to the Upper Ohio. The city offered a new waterfront with large docking facilities though the actual view of the city's buildings was partially blocked by 12-ft high floodwalls that rested on top the levee. The Kanawha discharged a substantial contribution of runoff on the left bank at River Mile 265.7. The transparency of this tributary was slight better (14 cm) than the Ohio (9 cm) and suggested lower suspended particulate matter in this inflow. The specific conductivity of the Kanawha was almost half (171 uS/cm @ 25C) than that found in the Ohio (323 uS) and it resulted in a pronounced lateral conductivity gradient in the Ohio River that was noticeable for more than 30 miles downstream.

Just below the mouth of the Kanawha River, a fleet of barges lined the left bank where the Ohio made a gradual bend towards the west. The combination of high Ohio River flow and the fast flowing discharge of the Kanawha resulted in extremely swift current along the right side of the loaded barges that faced the Ohio's main channel . I directed my canoe into the raging current and was soon streaming by the line of parked barges traveling at a speed approaching 10 miles per hour until after the last barge where a huge eddy grabbed my canoe and forcefully pulled it towards the left shoreline. A few strong backstrokes on my starboard corrected my course and I was soon swiftly descending towards Gallipolis, Ohio (RM 270).

I was at awe over the 30-ft high riprapped levees that lined the left bank for almost a mile upstream of the approach to Robert C. Byrd (Senator from West Virginia) Locks and Dam at River Mile 279.2. The new lock and half-mile access canal was cut into the left bank and isolated huge islands that are now almost completely covered with rock ballast. The project was completed in the early 1990s at a price of nearly 300 million dollars, which included deactivation of the old locks and mitigation expenses. A huge red arrow on the upper most rock-covered island directs downbound traffic into the 400-ft wide approach channel. The amount of stone use at this structure was truly amazing and presented a ghastly unnatural scene to the river's shorelines. I passed through the 600-ft lock in record time - 9 minutes. In response to my questioning of the river's "flow," the heavyset woman lock tender indicated that the tailwater was about 20 ft above normal for this time of year.

I observed an elderly man on a large John Deere lawn mower cutting his large riverside yard in the warm sunshine in the mid-afternoon on the right bank at river mile 295.2 near Miller, Ohio. I landed at his submerged dock to request drinking water and to inquire about downstream camping opportunities. He immediately cut his engine and came over to inquire about my visit. I introduced myself and explained the purpose of my stop. His name was Estil Jarvis and after a short chat, he eagerly took my empty 2-½ gallon collapsible water jug and marched up to his new large waterfront home for drinking water. Upon returning, he produced my filled jug plus two ice-cold bottles of mineral water.

I tried to refuse the mineral water but he said, "It looks like you're pretty warm and could use some cold water for your trip." I graciously accepted the kind offering. I thought he might offer a campsite in his recently mowed lawn but he didn't and I was too embarrassed to suggest the additional favor and instead returned to paddling down river.

I finally pulled out on the right bank at 5:10 p.m. at a Corps of Engineers boat ramp a mile below Proctorville, Ohio (RM 306). A middle-aged man with long scraggly hair was sitting in rusty old pickup and carefully watched me unloaded my gear at the ramp. I hauled my gear to a recently mowed field adjacent to the empty parking lot and proceeded to setup my tent in the quickly diminishing daylight. As I was eating dinner, an old beater car with two teenagers drove up to the ramp and conversed with the elderly man for a quarter hour and then they all departed and left the access to me. Later, two catfish fishermen set up at the landing. I was comforted by their presence thinking they may provide some security to questionable activities that may be transacted at this isolated public access by notorious looking motorists. I was tired from paddling and went to bed early - 63 miles today. 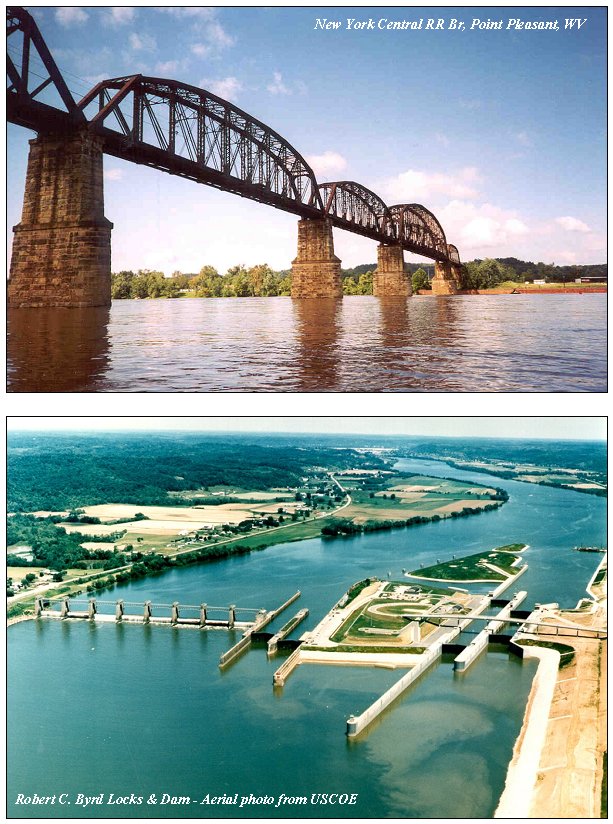