Heavy thunderstorms and rainfall through the night resulted in a restless evening for I had to keep vigilance for rising river levels. The rain broke around 4 a.m. and I took the reprieve by breaking camp and was underway again just after 5 a.m. in darkness. The river had risen about one-half foot and was noticeably more turbid than yesterday, the result of fresh sediment inflows from upriver runs and creeks.

The Ohio Edison power plant discharged a large steamy mass of 31oC (88 oF) cooling water on the right bank at RM 102.2 at an acute bend in the river called Dille Bottom. The conductivity of the thermal plume was noticeably greater than the river and indicated the presence of unknown dissolved minerals in the cooling water. Just downstream, a large dredge was mining sand and gravel from mid-channel and placing its treasure in a fleet of empty barges that were parked mid-stream. I had to be careful at passing the operation for a small towboat was maneuvering empty barges around the dredge and I was not certain if the captain was aware of my presence or intentions in the dim light of the early morning. I paddled towards the shoreline to give the towboat and mining operation as much clearance as possible and continued my decent along the left bank.

Steep forested hills with their tops shrouded in fog provided beautiful vistas at dawn. Intermittent rain and gray skies continued throughout most of the day. Towering rock palisades rose up some 400-ft above the Ohio's surface near RM 106 below a sharp bend in the river. A railroad and highway were cut into the bluff at an elevation that was well out of reach of the river's grip.

Captina Creek discharged a turbid froth of brown debris-filled water near RM 109.7 on the right bank. My transparency tube measurement yielded a reading of only 3-cm. However, the stream's conductivity was substantially lower than the Ohio's and was likely heavily influenced by rainfall runoff, which is typically low in dissolved minerals.

Just downstream of the mouth of Captina Creek, I spied two people preparing to depart from a dock on the right bank in what appeared to be a catamaran sporting an awning over the front decking and tent laid out astern. I immediately directed my canoe to the catamaran's dockage to inspect the unusual looking vessel and talk to its crew. They were as surprised to see me as I was to see them.

A bearded fellow named Greg Emmons (age 56) and his companion Ted Dowdell (age 80) greeted me as I approached their mooring. They both looked lean and river-weathered.

"How far you going and where did you start?" shouted Greg as I approached the dock.

"I started at Pittsburgh and am heading to the Mississippi," I responded as I stared at their yellow catamaran that was rigged with leg-powered paddle wheels. "That's quite a boat, where are you guys heading?" I inquired.

"To New Orleans, we are travelling the Ohio and Mississippi and raising awareness and money for ALS," explained Greg.

"Wow, that's a long way away, how many miles can you make in a day?" I asked.

"About 10-15 miles depending on wind and current, headwinds can really slow us down," said Greg.

"Yea, I know what you mean," I replied as Ted inched closer and leaned over the dock to inspect my craft.

"No, it's a skirted canoe," Greg replied before I even had a chance to answer.

"That's right, the canoe cover comes in handy in a rainy day like today and it offers some protection against wind and boat-driven waves," I added.

I mentioned to them that I had heard about their trip a few weeks earlier. My mother-in-law had seen Ted on TV and called me to say that someone who was 80 years old was planning on "paddling down the Ohio." I was happy to learn that Ted had partner and that Greg's wife was providing shore support as she followed them as they made their slow procession downstream. We wrote down each other's e-mail addressees and took pictures of each other's boats. I wished them a safe journey and success with their venture and indicated I would e-mail Greg once I returned to La Crosse. I learned later that these courageous fellows did make it to New Orleans, tired and many pounds lighter, arriving there on November 24 some 100 days after their departure on the Mononghela River at Fairmont, West Virginia.

Skeptical onlookers - "It seems a difficult task to make these people on the bottoms believe that we are skiffing it for pleasure - it is a sort of pleasure so far removed from their notions of the fitness of things; and so at last we have given up trying, and let them think of our pilgrimage what they will."

I arrived at Hannibal Locks and Dam (RM 126.3) at 11:05 and was directed to into the longer 1200 ft lock which is normally used for commercial traffic. Prior to this I had been locking through the 600 ft lock chambers.

In response to my asking for river flow information, a lock tender said, "The tailwater was running about 4 ft above normal."

I asked again if he knew what the discharge was, and he just looked at me as if I was deaf. Apparently, lock tenders have no concept of the rate of flow, for I was never able to obtain this information at any of the locks and dams on the Ohio. I finally gave up trying. Instead, I just inquired about river stage levels and whether the river was falling or rising. That type of hydraulic information was readily available. I surmised that the river was flowing substantially above normal based on abnormally high tailwater elevations. Further, the river was more turbid and carried substantial woody debris and miscellaneous floating refuse which had likely been flushed in to the mainstem from shoreline catchments and upstream tributaries.

The river appeared to widen below New Martinville, Ohio and the bluffs became smaller. Islands were more frequent, but still seemed rather sparse for such a large river. I had a difficult time finding a campsite since shorelines were developed, too steep or covered with thick vegetation. I finally decided that I would need to seek permission from a private landowner in order to obtain a suitable campsite for the evening. I first tried a large trailer park near Bens Run, West Virginia (RM 147) that offered a large grassy area along the river, but didn't find anyone at home.

I then paddled to the Ohio shoreline and saw a small but attractive white house perched 50 ft above the river. More importantly, a huge freshly cut lawn on the side of the house ran gently down to the river's edge. The day was getting short and I hoped for the best as I made my way through a small flower garden and walkway that led to house's back door. Jack and Ruth Heiney, an elderly couple who had just sat down at the dinner table with their grandson to eat, soon greeted me and asked me in. After explaining who I was and what I was doing, they quickly agreed to let me use their yard for my campsite. They pleaded with me to join them for dinner but I graciously declined for I didn't want to overextend my welcome. They then offered fresh tomatoes from their table, but I refused this offering as well. I did ask them for fresh water and Jack pointed to an outside facet and asked if I needed a bucket.

Ruth exclaimed, "Take as much as you need and if you need anything else, just let us know."

"Thank you very much, I have my own jugs and will fill them later," I replied.

I quickly pitched my tent and started heating up water to re-hydrate my freeze-dried dinner. I then remembered that I needed a spoon, the only item that I had forgotten to pack. I grabbed a handful of granola bars and went back to see if Jack and Ruth could provide a plastic disposable spoon in trade for my breakfast snacks.

They were pleased to see me again and Ruth quickly pulled out a kitchen drawer and pulled out an old shiny silver spoon in response to my request. "Keep it, we have plenty, wedding presents from many years ago," she added with a smile.

I tried to refuse but this time they wouldn't take no for an answer. I again thanked them and offered her my barter and said, "Here is something for your breakfast, don't worry, I have plenty more." We all laughed and I returned to their backyard to eat my dinner.

I was in the tent by 7:15 p.m. and wrote in my journal as the sounds of distant barking dogs and nearby floodplain frogs began their nightly serenade. Jack came down a short time later with a packaged donut and asked if I needed anything else. I stepped out of the tent to thank him for their kindness. We talked about the Ohio and the rainy weather that has drenched the Ohio River valley all summer long. He then remembered that there was a pubic campground with new shower facilities just a few miles down river on the right bank. He was sorry that he hadn't mentioned it earlier.

I laughed and said, "Well I probably wouldn't have been able to get a spoon there." I thanked Jack for the information and indicated I would definitely stop there to try out their showers in the morning. The mosquitoes soon drove us back to our quarters prematurely and I finished my notes before retiring shortly before 8 p.m. feeling fortunate and thankful for meeting the Heineys.

Campsites - "Perfect camping places are not to be found every day. There are so many things to think of - a good landing place; good height above the water level, in case of a sudden rise; a dry, shady, level spot for the tent; plenty of wood, and, if possible a spring; and not too close proximity to a house." 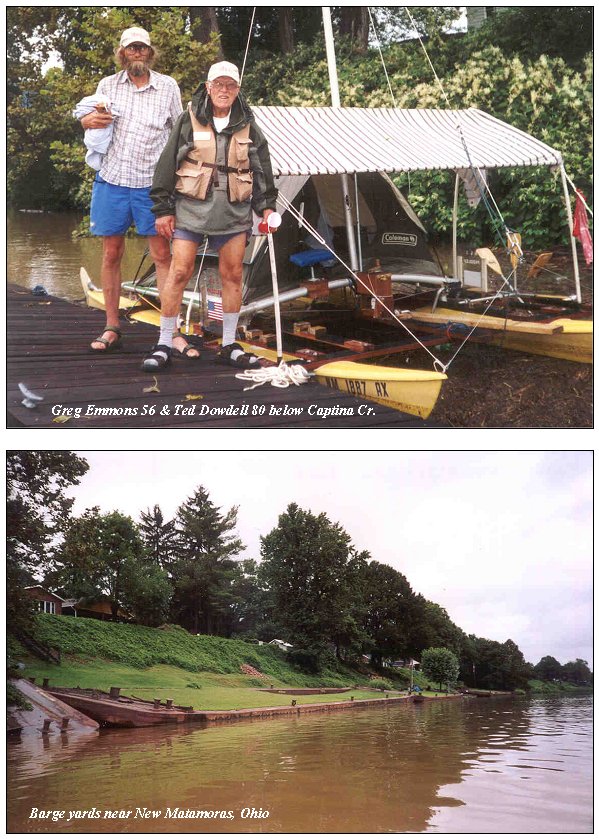