Another young couple came down to the beach after midnight. Their visit was short and their activities did not involve the use of firearms. Other than this brief disturbance, the evening was peaceful due to sporadic river traffic, the absence of other nocturnal human activities and stable water levels. I departed my sandbar encampment shortly before 5 a.m. under morning starlight and descended into light, cool north winds with wisps of fog hovering over the river's surface. A half moon provided ample lighting for a half-mile crossing to the left bank above Cypress Bend.

I descended the secondary channel on the right side of the three-mile long by one-mile wide Diamond Island at RM 818. Loud gunfire from unknown locations within the nearby floodplain erupted before sunrise and disrupted bottomland wildlife. I assumed the volley marked the opening of duck hunting based on rare silhouettes of fast flying ducks that soon began to appear on the horizon. The hunters were apparently concealed in inland marshes for there were no blinds encountered on the Ohio. A large doe bolted from the forested island on the left shore and crossed the channel in front of my canoe in an apparent escape from nearby duck hunters. I could not believe the swimming speed of this animal as I tried to race it to the opposite bank a quarter mile away. At mid channel I conceded defeat and watched and marveled at her ease at confronting the fast flowing secondary channel, including bounding up a steep eight-foot high clay bank to agricultural land on the right bank.

I stopped to refresh my water supply at Mount Vernon, Indiana, which two hundred years ago was known as McFadin's Bluff based on a prominent sign placed near the downtown waterfront. There were no obvious "bluffs" on the horizon so a change in name by the city's fathers seemed appropriate. By coincidence, Mount Vernon's waterworks plant was just up the hill from my dockage. I saw a young man taking a cigarette break at a side door of the facility and asked him if he could supply drinking water. He replied, "Yeah sure, but you'll have to wait outside, city rules."

I thanked him and handed him my empty 2-½ gallon collapsible container. Within minutes he returned with crystal clear, freshly filtered Ohio River water. "Thanks a lot, now I'll be drinking the water I canoed in upstream," I said with a chuckle and lugged the heavy container to my canoe back down at the levee.

As I walked down the hill, I gazed over the half-mile wide river that stretched out before me for six miles upstream. A seemingly tiny towboat pushing a fleet of barges was rounding the upstream bend six miles away. For the first time since leaving Pittsburgh I felt at awe at the immensity of this waterway and a short burst of anxiety turned in my stomach at the thought of my modest canoe on it's agitated, swift flowing surface. By the time I reached the canoe my apprehension had dissipated but a renewed respect for the journey ahead was implanted in my mind. I was eager to get underway after stowing the reclaimed river water in my bow.

Drinking water - "…for water, being obliged to settle and boil the roily element which bears us onward through the lengthening days. Were there no hardships, this would be no pilgrimage worthy of the name. We are out, philosophically to take the world as it is; he who is not content to do so, had best not stir far from home."

Downstream from Uniontown, Kentucky, the John T. Myers Locks and Dam spanned the river immediately above the large Wabash Island at RM 846. A secondary channel on the island's south (left) side contained a half-mile long spillway that protruded upstream of the dam at almost a 90 degree angle. I stopped a mile upstream of the lock at 1 p.m. along the right bank to collect a water sample and waited passage of a downbound tow pushing a compliment of 15 loaded barges. I took on a few gallons of water from the tow's stern waves because I got lazy and let the breakers hit me broadside. After a few minutes of sponging, I proceeded to the lock where I waited for an hour before it was my turn to lock through.

The large Wabash River released its voluminous turbid brown water to the Ohio at on the right bank at RM 848. The transparency of the Ohio decreased from 24 cm to 13 cm and the conductivity increased 30% as a result of this inflow. The Wabash forms the state boundary between Indiana and Illinois and it makes a wild meandering descent as it approaches the Ohio. Fifteen feet tall steeply cut clay banks and a flat treeless floodplain characterized its last half-mile run to the Ohio. The width of the river increased noticeably below Wabash Island a few miles downstream where the secondary channel that receives surplus flows from the John T. Myers' spillway is reconnected with the main channel. After the confluence of the Wabash, the Ohio seemed like a much larger and more powerful river.

Wabash River - "Three hundred sixty yards wide at the mouth, about half the width of the Ohio, it is the most important of the latter's northern affluents, and pours into the main stream a swift-rushing body of clear, green water, which at first boldly pushes over to the heavily-willowed Kentucky shore the roily mess of the Ohio, and for several miles exerts a considerable influence in clarification."

Warm sunshine and clear weather yielded a pleasurable afternoon descent to Old Shawneetown, Illinois (RM 858) and it felt more like July than mid-September. I pulled out on a gently sloping sandy left bank just down stream from the Blackburn Public Access Site and across from Old Shawneetown. After surveying the landscape and scars of previous high water stages, I selected a campsite about fifteen feet above the water surface. However, about two weeks earlier, during the previous spate, only the top 1-foot of my tent would have protruded above the river's surface. 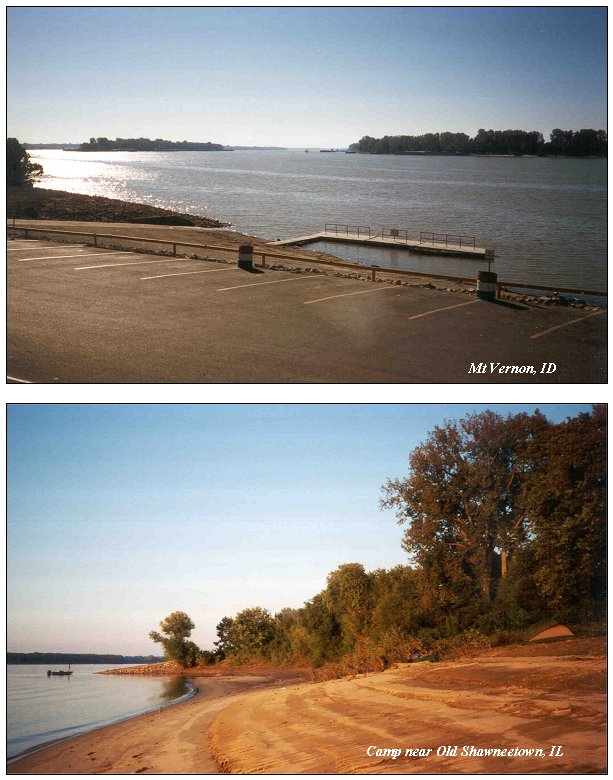