It was a relatively tranquil evening with the exception for the occasional vehicle traffic on Highway 56 located just 100 ft north of my tent on the top of small embankment. Light fog provided a damp chill to the early morning air and the heavily laden dew on the grass provided a caffeine-like stimulant to my bare feet as I prepared to brake camp at 4 a.m. The convenience of the marina's dock made for quick and clean (no mud) departure about an hour later.

A few miles downstream, the city of Madison, Indiana stretched out for two miles on the right bank but only extended about a quarter-mile inland based on my navigation charts. The city had numerous streetlights burning along its baron waterfront and provided dim lighting for my shoreline descent. The morning was humid and warm with the sun failing to burn off the last wisps of fog until after 9:30 a.m. Then the sun's reflection off the calm river's surface resulted in a painful glare into my left eye as I descended in a southeasterly direction. I resolved this by mounting my wide-billed hat sideways to block the unpleasant distraction to my vision.

Attractive sylvan hills that descended abruptly to the river's edge, some containing fractured limestone with occasional large boulders resting along the bank, were noted on the Kentucky side above RM 566. The water level here had dropped 8 ft in the past several days and exposed muddy shallow areas that contained sparse beds of emergent vegetation. Ducks and herons were attracted to these rare littoral habitats.

A large sand and gravel pit operation in the floodplain along Indiana's bank above Camp Creek (RM 578) formed a large artificial backwater area that appeared to be separated from the Ohio by a one-mile long linear land mass. The height of the embankment surrounding the borrow site was more than 25 ft which suggested tremendous quantities of earth have been removed to form the extensive backwater lake.

I pulled out briefly before noon at a landing at Westport, Kentucky (RM 580) to obtain water and discard my garbage consisting of empty dried food packages and granola bar wrappers stuffed into a quart-sized Ziploc bag - all for 3 days travel. Just after my departure downstream, I passed an elderly man canoeing with his large German shepherd heading upstream to the ramp. His well-used aluminum canoe was without packs or gear and I wondered where they had been on their morning excursion. Perhaps they were exploring Eighteen Mile Island that resided one mile downstream along the Kentucky shore. I stopped again at River's Edge Marina in Indiana at RM 584.7 for a Pepsi and a candy bar and to get out of the hot sunshine.

My afternoon run downstream to Twelve Mile Island was very warm and uncomfortable, even with a moderate tailwind. My digital thermometer mounted on my belt loop registered 106.3oF, though this was strongly influenced by direct sunshine. I took frequent water breaks and sponged moderately turbid river water on my forehead to cool off. Recreational boat traffic increased noticeably in the afternoon and included a male paddler meandering around in the middle of the river in a small red kayak. The kayaker drifted down the river seemingly waiting for large boat waves to challenge his paddling abilities. He stopped this activity shortly after a small Coast Guard vessel appeared on the scene and then he vacated the main channel and descended the left bank.

I took out on a gravelly and woody debris-strewn beach at 3 p.m. just downstream from Twelve Mile Island on the right bank and sought out permission to make my encampment for the evening. The Clark County Casting and Conservation Club owned the property and I thought surely these environmentally conscious folks would allow my overnight visit. The clubhouse was on top a 30-ft high hillside, which I ascended by walking up its steep asphalt boat ramp. My luck was with me for a few of club's members were on hand preparing the grounds for a wedding reception to be held on Saturday. They welcomed me and gave me permission to camp on their beach and provided cautions for navigating through busy and dangerous Port of Louisville.

"You be sure to stay on the left bank when you head downstream tomorrow," one advised.

"Yeah, you don't want to be like those two jet skiers who went over the falls last year," another warned.

"Falls"? I thought to myself, then responded, "No, I certainly don't want to do that." I then tried to remember what my navigation charts foretold at Louisville. I thanked them for their advice and wished the father of the bride a happy wedding and headed back to my canoe where I immediately picked up my navigation chart to study the downstream approach to McAlpine Locks and Dam at Louisville. I quickly scrutinized the map and quickly discovered an unmistakable label reading "Falls of the Ohio," which zigzagged across the most of the river channel in the shape of an elongated letter Z. The access to the McAlpine Lock was through a long narrow channel along the left bank starting at downtown Louisville. "O.K., stay on the left bank," I mumbled to myself and then returned my thoughts to pitching my tent and making dinner.

Numerous recreational craft were plying the waters through the early evening. The wakes of the larger boats were crashing on my gravel beach and riling up the silt and sand deposited during the previous high water. I discovered pieces of black slate being unearthed as the waves receded, the first encounter of these fragments of compressed clay bedrock during my trip. 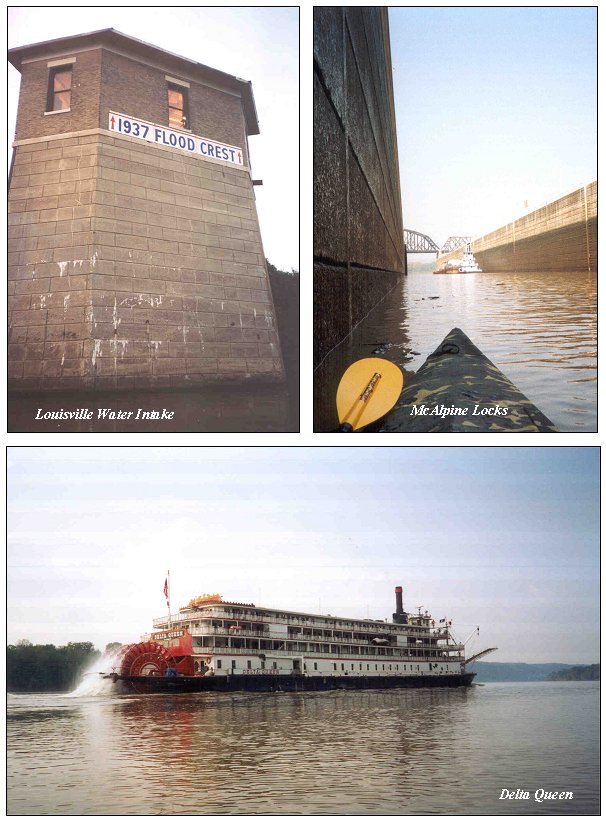