I departed along the right bank under the waning morning stars at 5:01 a.m. Fog enveloped the river and its floodplain at 6:30 a.m. and cleared off by 8 a.m. Ripley, Ohio (RM 818) presented an attractive old river town from my perch on the Ohio. I was particular impressed by block of large old homes on a hillside that rose up from the 20 ft high levee, apparently out of the grip of major floods. At mile 427, a small ferry hauled a few automobiles 2000 ft from the Ohio shore to a landing at Augusta, Kentucky under warm sunshine and calm weather.

My journey on the Meldahl Pool ended at 10:30 a.m. as I entered the 600-ft lock chamber at River Mile 436.2 after a 30-minute delay. A downbound towboat left the adjacent 1200-ft lock at almost the same time as my departure. It was in no hurry since I kept pace with it for more than ten miles downstream. This seemed odd and I suspected the pilot was either in training or was timing his passage through the busy, bridge-filled port of Cincinnati, 30 miles downstream.

I wanted to a stop at New Richmond, Ohio to stretch my legs and find an eatery for lunch, but the town's levee was covered with several inches of soft brown mud recently exposed with the quickly falling stage. Just downstream, a 40-ft tall black and white staff gauge rose up above the height of the levee by more than 15 ft. It looked like an enormous yardstick stuck halfway up the embankment. The top of this ruler was more that 50-ft above the river level and provided an indication of potential water levels during times of major flooding. I was happy the river's stage was falling.

The site of old Lock and Dam No. 35 was a mile downstream of New Richmond and I paddled across the river to reach its access ramp on the Kentucky shore thinking that this would provide a haven for camping. Unfortunately, the moderately steep ramp was also covered with 2-4 inches of freshly deposited silty-clayey ooze, just like that observed on the opposite shore at New Richmond. The river had dropped about 6-ft in the past few days based on the cake of mud that extended about 15-ft up the ramp. I left with disappointment in search of a cleaner takeout downstream.

I stopped at Harbor Park Marina at California, Ohio (RM 462) in the mid-afternoon to inquire about potential camping opportunities in this reach. Three young men greeted me at the marina's dock and quizzed me about my trip. After a friendly exchange about my voyage, the weather and the overall health of the river, I asked if they knew where I could camp for the evening. They all looked at one another and gave a simultaneous shrug of their shoulders. Then one suggested the mouth of the Little Miami, which enters about 1-mile downstream. However, the other two argued that it would be too wet and muddy. I offered payment to camp in their boat yard on top of the levee, but they said that wouldn't be permissible. Seeing that my efforts to gain their trust or sympathy to achieve consent to camp at their marina was proving fruitless, I departed downstream after consuming an ice cream sandwich and an ice cold tea purchased from their floating grocery.

The river narrowed and the current speed increased as I approached the city limits of Cincinnati, where the river makes two abrupt bends as it heads in a general westerly direction. I spied another marina on the Kentucky side near RM 465 in the late afternoon and hurriedly paddled across the river to again seek an encampment for the evening was approaching quickly. A sign at the marina's fuel dock greeted me to Ft. Thomas Marina. After securing my canoe at the transient tie-off, I went searching for the proprietor at the marina's lounge. I found a heavy set, short middle-aged man wearing an old gray T-shirt and worn blue jeans sitting at an otherwise vacant bar talking on phone while country music played on a large jukebox in the corner. He quickly ended his phone conversation as he saw me approach and offered a friendly greeting, "Hello, and how are you today."

"Tired but fine, are you the owner?" I replied.

"No, I'm just watching the bar while he's having his dinner at his house on the hill."

I introduced myself and explained my strong desire to find a campsite and wondered if the owner would provide a spot to set up my tent. The caretaker's name was Bill Ruel, a glazier in Cincinnati area, who lives at the marina in his 58-ft houseboat. Bill immediately got on the phone and interrupted Bob Laubrick, the marina's owner, from his dinner and passed on my request for a campsite. Bill successfully negotiated a grassy site adjacent to the marina's parking lot on top of the levee.

I quickly set up my tent along the stairways to the marina on a sparse grassy area mixed with gravel that sloped moderately towards the river. Although the site was less than ideal, I was thankful for securing the site and graciously provided my appreciation to Bob when he returned to his marina while I was preparing my encampment. I tried to offer him compensation for his hospitality but he refused payment.

Later, I returned to the mostly empty bar for a beer and to see if they had something that might constitute dinner for the evening. A young woman was now tending the bar and could only offer snacks and beverages. When Bill overhead my request for food he walked over and asked, "Do you like keilbasa?"

"Well sure, I told you I'm from Wisconsin," I said with a laugh.

"Great," replied Bill, "I'll have my girl friend cook you up a hot sandwich on my houseboat."

Ten minutes later Bill's girlfriend appeared with a steamy, odorous open-faced keilbasa sandwich as promised. "Wow, this is delicious," I said and ordered another beer to wash it down.

Bill walked over to my table while his girlfriend plugged quarters in the jukebox and whispered, "You can use my shower in the houseboat after my girlfriend leaves. She doesn't like me being to kind to strangers, but sometimes I don't listen to her." I eagerly accepted his generous offer and arranged for the clandestine shower at 8 p.m. 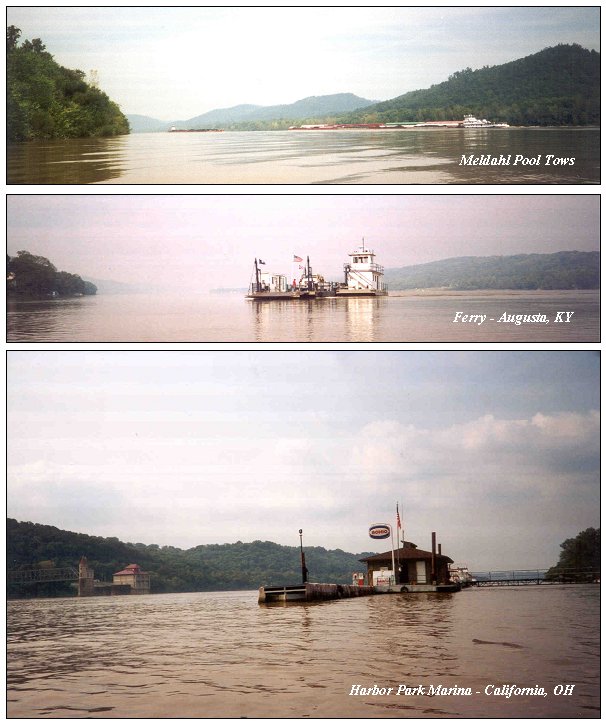