A steady rainfall through the night and early morning increased to a downpour at 7 a.m. as I headed for the bathroom for what might be my last shower in many days. The showerhead was about the size of a dinner plate and the numerous eighth-inch diameter outlet holes let forth a deluge of warm water, a premonition of what was to come.

The girls were rustled from their beds and were packed up and ready before me. I delayed my packing and was nervous and hesitant about starting the trip in such foul weather. We ate a light breakfast in the lobby as other patrons talked about ongoings at nearby universities. I tried in vain to get directions to any boat landing on the Monogahela River but the hotel patrons and guests didn't even know if there were parks along the river let alone a landing. Further, some even seemed confused as the direction of the river's flow and gave me a bewildered look when I asked them how best to cross to the southern side for they didn't realize that the hotel was north of the Monogahela. Finally, a young woman hotel clerk produced a city map, which confirmed our position on the north side of the river and she provided sufficient directions to reach the opposite bank. From there we would be on our own in our goal to find a suitable launching site.

We crossed over the 600-ft wide Monongahela River on the Birmingham Bridge and turned off onto side streets to find our way back to the river's edge as the rain diminished to sprinkles. Initial attempts to find the levee were unsuccessful due to road construction and blocked roads. Newly renovated buildings bordered the narrow streets with small attractive condos and apartments presenting the dominant urban use. We eventually made our way closer to the river and met a toothless bearded fellow with tattered clothes out on a walk with a small blond-haired girl and yellow lab, and we asked him for directions. He was very helpful and provided very specific instructions to a hidden landing on the opposite side of nearby railroad tracks as his right index finger pointed out the correct bearing. We were soon at a nicely paved ramp that was swarming with geese, ducks and pigeons which converged on us in their search for a morning handout. They quickly departed the ramp as they could see we were ignoring them and they became uninterested in my packs, paddles and miscellaneous camping gear.

The landing's wooden dock provided a convenient and safe site for loading and preparing the canoe. A small sheen of oil provided a metallic-like appearance to the river's surface as I slowly slid the canoe into the river with some excitement in the anticipation for the voyage ahead. After a short test run a few hundred feet up river and back to check for load stability and balance, I turned around and bid farewell to the girls and headed downstream, hoping to see them one more time at "The Point," where the Monongahela meets the Allegheny and marks the official beginning of the Ohio. Rains returned with a vengeance as I made my way to the mouth of the Monongahela.

I reached Point State Park shortly before 9:30 a.m. as the rain subsided. While waiting for the girls to reappear, I noticed the Ohio was marked mile 0 on my US Corps of Engineers navigation chart. This river mile notation is backwards from conventional USGS methods which would normally place mile "0" at the confluence with the larger downstream river - the Mississippi.

A huge water fountain near the fork of the two rivers sprayed a heavy jet of water 100-ft into the dark gray skies, the apparent "aquacultural" monument marking the meeting of these three great rivers. I pulled out along a concrete levee near the end of the Monongahela and was soon greeted by the girls who had been waiting in the rain along the Allegheny for several minutes. They were wondering which way I was going to head since they were utterly confused as to how I arrived from my upstream departure. Apparently they had been spending too much time in Pittsburgh since their river knowledge was becoming as insightful as the local residents we met in the hotel that morning. They asked, "Where is the Ohio?"

I responded, "Watch how the current is flowing, the two rivers that meet here form the beginning of Ohio." I then pointed out the Allegheny, enters on the north side of the park and that my canoe was docked in the Monongahela, which lies south of the park. I then had to add that my canoe was facing upstream which had apparently been part of their confusion. Once they ascertained these simple facts, their orientation with the waterways became clearer, I think. However, I learned later that on their return to La Crosse, they were headed for Philadelphia instead of Chicago and didn't realize their mistake until they determined that they had crossed the Allegheny twice while heading out of Pittsburgh.

I took a quick tour of the State Park with my daughter. A Lewis and Clark exhibit was on display in several tents but the public was absent due to the rainy Saturday morning. Numerous agency officials were on hand to answer questions about the display and the infamous journey, which started here almost two hundred years ago (August 31, 1803). I only had one question and directed it to an uniformed official from the National Park Service, "Where is the replica of the keel boat that will be heading downstream?" I added with a smile, "We had come all the way from La Crosse, Wisconsin just to see the boat."

He looked dismayed and sighed, "The boat isn't ready yet, they're still fixing it."

I laughed and said, "Doesn't it have to be in the river tomorrow to commemorate Lewis' departure down the Ohio?"

He nodded yes but seemed to suggest some uncertainty to these plans. I indicated that this reenactment of the infamous departure was as unpredictable as the original sailing two hundred years ago. He agreed and we both had a good laugh over the unfortunate coincidence.

Colleen and I took several pictures in the park and at the junction of the three rivers before I departed in light rain shortly before 10 a.m. I ascended the Allegheny a short distance to measure the river's clarity and recorded transparency of about a half meter, almost identical to the Monongahela. The Allegheny carried with it substantial woody debris that had apparently been flushed in upstream from the recent rainstorms. Downbound and upbound tow boats were approaching the confluence of the three rivers and I left the middle of the channel to give these boats wider birth while I descended the right descending bank of the Ohio.

"The Alleghany and the Monogahela at Pittsburgh, where they unite to form the Ohio, are nearly equal in magnitude; the former, however, on account of the rapidity of its current, and the transparency of its waters, is a far more beautiful river than the latter."

"The current of the Monongahela, as it flowed from the south, covered with mists rising into the wintry air,--for the temperature was but a few degrees above zero,--had not a particle of ice upon its turbid bosom… I rowed gayly on, pleased with the auspicious beginning of the voyage, hoping at the close of the month to be at the mouth of the river, and far enough south to escape any inconvenience from a sudden freezing of its surface, for along its course between its source at Pittsburgh and its debouchure at Cairo the Ohio makes only two hundred and twelve miles of southing,--a difference of about two and a half degrees of latitude."

I took out for a brief rest stop below Emsworth Locks and Dams (RM 6.2) at a small landing on the right bank around noon. An eighty-year-old fisherman at the landing's dock cautiously looked me over as I slid into the dock just a few feet from where his old fishing poles were laid.

In response to my questioning of his success he replied, "I've been here an hour and caught nothin'. I wished I'd brought minnows, then I'd have some fish to show you."

I could see a whimsical smile on his wrinkled gray face as he tipped his well-worn black baseball cap and said, "Have a safe trip down river." I thanked him and wished him better luck.

The dark gray rainy skies gave way to bright sunny weather in the afternoon; however, strong headwinds slowed my northwesterly descent. Small tributary streams added considerable turbidity and miscellaneous garbage to the Ohio below Pittsburgh. Plastic and glass bottles, jugs, wrappers, bags, barrels and everything else imaginable were pilled up along the shoreline, especially where logs, and parked barges impeded river currents and trapped floating debris. On the left bank at river miles 20 to 22, tall mounds of mine tailings piled 50 to 75 feet high provided a displeasing view to the otherwise attractive half-mile wide hilly wooded river valley.

Chartier's Creek below Pittsburgh -" To-day, these creek banks, connected by numerous iron bridges, are the dumping-ground for cinders, slag, rubbish of every degree of foulness; the bare hillsides are crowded with the ugly dwellings or iron-workers; the atmosphere is thick with smoke."

A flooded Beaver River discharged a torrent of brown muddy water and woody debris on the right bank at mile 25.5 and resulted in a turbid plume that extended laterally into the Ohio for a few hundred feet and for a great distance downstream. I pulled out at 5:17 p.m. on a grassy floodplain on the right bank about one-half mile below the Beaver River and immediately upstream of a municipal wastewater treatment plant. I sought permission for camping but didn't find anyone at the facility and returned to set up camp under a large silver maple tree. Several bicyclists went by on a nearby road and apparently weren't alarmed by my encampment so I figured I had chosen a suitable place to pitch my tent for the night. The early evening gave way to calm, clear skies. Personal watercraft and an occasional recreation boat pulling water skiers were still plying the Ohio at sunset. I headed to bed as a chorus of frogs filled the evening air with their intermittent serenade. 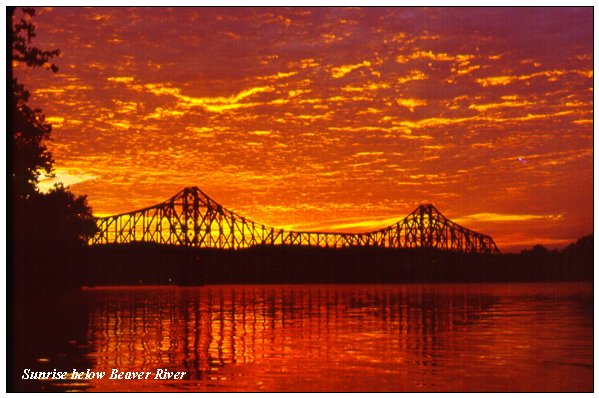