The 981-mile long Ohio River is a descendent of the pre-glacial Teays River, an ancient river that drained large portions of primordial northeastern North America 2 to 5 million years ago. Continental glaciating led to the demise of the Teays River by greatly altering its drainage and blocking its westerly flow. A massive glacial lake (Lake Tight) formed in southern Ohio and parts of West Virginia and Kentucky and persisted for several thousand years. Lake levels eventually rose high enough to breach to surrounding hillsides and form a new westerly drainage, the early stages of the present day Ohio River (Ohio DNR, 2004).

Native Americans and early French explorers referred to the river as "the beautiful river" owing to its towering forested hillsides and wooded floodplains, riparian marshes, and clean, clear water. It is believed the origin of its present name is derived from Wyandot Indians who called it "Oheeza" (Eckert, 1995).

The Ohio River provided the major route for early western settlement and commerce as early colonists and immigrants moved from east to west across the expansive continent. Two hundred years ago, Captain Meriwether Lewis began his intercontinental crossing of North America to the Pacific starting at Pittsburgh on August 31, 1803. Captain William Clark joined the expedition at the Falls of the Ohio near Louisville. On May 14, 1804, the duo lead their infamous "Corps of Discovery" up the great Missouri to explore the newly acquired land purchased from the French.

Ohio River commerce increased substantially with the invention of the steamboat, the first launching of such boat on the Ohio occurred at Pittsburgh in 1811. The completion of the Louisville and Portland Canal in 1830 around the Falls of the Ohio at Louisville greatly improved river commerce by eliminating the need to navigate the hazards of the rapids during low water periods. In 1909, plans were made to create a 9-ft channel to ensure year-around navigation on the Ohio. Over the next twenty years, 50 dams with navigation locks were constructed to facilitate commercial use of the river (Pearson and Krumholz, 1984). Most of these dams have been replaced in the last 25 years with larger dams and double locks. Today there are only 20 locks and dams on the Ohio. With the completion of the massive Olmstead Locks and Dam at a location 16 miles above the Ohio's mouth, the number will be reduced to 19. To give some idea of the river's present day use, it is said the river makes up 10 percent of US navigable waterways yet contains 40 percent of its river traffic.

The Ohio River basin accounts for only 17 percent of the total drainage area of the Mississippi's watershed yet its discharge represents about half of the entire river flow reaching the Gulf of Mexico. In contrast, the Missouri River basin comprises about 40 percent of the Mississippi's drainage area but only accounts for about 10 percent the flow at the Gulf. Obviously the Ohio River Valley receives considerably greater precipitation than the western states. This fact is something I experienced during my brief visit to the valley.

River pollution was a serious problem on portions of the Ohio, especially below the major urban areas prior to the 1960s. Discharge of industrial wastes and municipal sewage resulted in a decrease in dissolved oxygen and excessive counts of fecal coliform bacteria. In addition, the upper portions of the Ohio suffered from periods of low pH associated with acid mine drainage. The Ohio River Valley Water Sanitation Commission (ORSANCO) representing eight states and the federal government was established in 1948 to control and abate water pollution in the Ohio River Basin. Water pollution control requirements improved the river's quality. However, urban runoff, agricultural activities, and abandoned mines continue to threaten the quality of the river today. There are approximately 1000 permitted wastewater outfalls to the Ohio, the largest of which are cooling water discharges associated with 49 power generating stations. The importance of the river's quality is heightened when one considers that over 3 million people rely on the Ohio River for drinking water (ORSANCO, 2004).

Considering the size of the river, its major shoreline development, its heavy commercial navigation traffic, its massive dams, and potential exposure to pollution, one might ask, "Why would anyone want to paddle down the Ohio for fun?" Actually, for someone with an interest in water pollution control, inland navigation infrastructure, and long distance canoeing, the Ohio isa perfect place to wet one's paddle. However, I had another reason. In the spring of 1894, prominent historian and fellow Wisconsin paddling enthusiast Ruben Gold Thwaites toured the length of the Ohio in a small row boat with his wife, 10-yr old boy and his brother-in-law (Thwaites, 1903). Previous to this, Thwaites canoed portions of the Fox, Wisconsin and Rock Rivers in the summer of 1887 and provided a delightful account of his trip in "Down Historic Waterways: Six Hundred Miles of Canoeing upon the Illinois and Wisconsin Rivers" (Thwaites, 1888). Having read his journals and paddled in his path on the waters of Wisconsin and Illinois, I felt an obligation to follow him to the Ohio where I could carry out a similar pilgrimage.

What follows are my observations and experiences as I traveled this great river during late summer of 2003. I have included quotations from Thwaites and other early historians and explorers as I have done in previous river journals as a means of contrasting current observations with the early historical records. To be sure, these early colorful portrays of the Ohio are more interesting than my own and request your forgiveness for my lack of brevity or clarity. The Ohio is quite a river. Although it is very developed and commercial tow traffic is frequent, there are reaches that are still quite attractive, especially as the early morning sun casts shimmering light over forested hillsides onto a lightly fog-covered surface of the river. These are times where it still earns its name "La belle rivière" - the beautiful river.

I would like to thank Pete Redmon, former Kentuckian, Ohio River Rat, fisheries biologist and US EPA employee for his assistance in planning my trip and for being "a phone call away" when the need arose. In addition, a recent Ohio River kayaking trip journal of Rick Klevorn, Sawyer, Minnesota provided a useful reference and some inkling of what I had in store for me. Finally, I thank my dear wife for putting up with my voyages, chauffeuring me to Pittsburgh, extracting me from the Ohio's mouth, and for providing a friendly review of this journal. 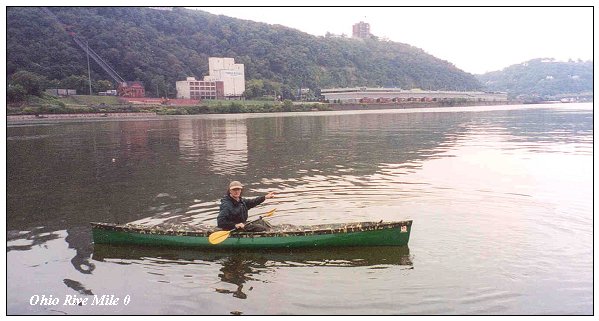