Freshwater Mussels near Judson - "A great profusion of unios were lying in the sandy bottom, buried to their umbones; the species called fasciatus, with singularly beautiful nacres tinged with a brilliant carnation, being the most prevalent. I made a good collection of these shells, none of which were decorticated."

I awoke to clear skies with mild temperatures. I had a peaceful and restful evening but hordes of mosquitoes provided a brisk attack while breaking camp and hastened my departure at 5:40 a.m. The river appeared to be cresting since it only rose a tenth of a foot overnight.

Stalks of early summer corn were falling into the river along the left bank at a bend near mile 129 where a farmer had planted too close to a sheer 5-foot high eroding bank. Further downstream, huge slices of soil from steep earthen banks were sliding into the river and I allowed ample distance between my canoe and shore to avoid filling my canoe with silt and loam. Below Judson the river runs relatively straight and peacefully for about four miles with stable banks and attractive wooded shorelines.

The Blue Earth River dumped a huge load of mud-filled water as it entered from the south on the city of Mankato's west side. Just opposite this inflow, a 200-foot high tree covered bluff rose up on the left descending bank. This tributary is the Minnesota's largest and drains south central Minnesota and northeastern Iowa farmland and results in a substantial increase in the Minnesota's flow. Its contribution of flow transforms the Minnesota into a "large" river from here to where it dumps into the Mississippi about 115 miles downstream. I poled up the Blue Earth a short distance to assess its power and grab a water sample. The river's current was strong and greatly restricted my upstream progress. Its transparency of was a moderate 7 cm - more than a 100% improvement over that observed in the Redwood River 95 miles upstream, but it real terms, only 4 cm greater. On my return downstream, I pulled out at large park on the right bank and secured several gallons of fresh water at a drinking fountain near a ballpark.

Blue Earth River - "This was a bold stream, about eighty yards wide, loaded with mud of blueish colour, evidently the cause of the St. Peter's being so turbid. It was not far from the mouth of this river that Le Sueur was asserted to have discovered in 1692 an immense deposit of copper ore. No traveler had ever entered the river to investigate his statements…As soon as I had reached that part of the bluff whence the pigment had been taken, Le Sueur's story lost all credit with me, for instantly saw that it was nothing but a continuation of the seam which divided the sandstone from the limestone…, a silicate of iron of a blueish-green colour…

I turned my back upon this romance of Le Sueur's Riviere Verte, and passing swiftly down the current, got into the St. Peter's again. The moment we got into the water of this last river, where it is not mixed with that of the Makatoh (Blue Earth), we found it exceedingly limpid, and altogether distinct from the turbid state of its tributary…There was no sensible current for some distance, owing to the backwater made by the Makatoh, the channel was about 100 yards wide, and the country extremely beautiful; the prairie occasionally coming down to the water's edge, whilst at other times bold bluffs arose with well-wooded slopes, interspersed with graceful clumps of trees."

I was underway again at 9:31 a.m. but soon heard rumblings of thunder in the west. The thunderstorm approached very quickly and I picked up my pace considerably once lightning was observed. I raced the storm to the Highway 60 bridge crossing at Mankato where obtained shelter under its concrete and steel canopy. I arrived just as strong winds and a heavy downpour hit the bridge. I rested the bottom of the canoe on large riprap along the right shore and began to munch on some snacks while watching the fury of the storm as skies darkened. With a blink of an eye, a bright white light flashed all around me and was instantly followed by a deafening crash of thunder. The lightning bolt startled me immensely and my heart raced with some agitation. The thunderclap apparently hit a streetlight above the bridge and was powerful enough to knock out all the power in downtown Mankato as indicated by the darkening of offices and businesses in buildings adjacent to the river.

I left my lightning shelter at 10:31 a.m. with some trepidation for thunder could still be heard in the east. Stormwater from Mankato's impervious surfaces gushed out of surcharge storms sewers and added "clear" water to the river's turbid flow. At downtown Mankato, the entire river is forced through a several hundred ft wide by mile and a half long aqueduct with 20 ft high floodwalls on both banks, a necessary precaution as a result of the city's development on the river's floodplain. I was only able to see the upper portions of buildings as a result of the monolithic walls. The engineering feat, though ugly, was quite impressive and rivaled some of the drab towering floodwalls I have seen along the Mississippi many miles downstream.

Since leaving Big Stone Lake several days ago, I have been generally traveling in a southeasterly direction. At Mankato, the River Warren's valley reached its southern limit. Here the massive River Warren met an older pre-glacial valley and caused it to alter its course and flow to the northeast. When viewed on a state map, the Minnesota River looks like a big transposed checkmark. I was at the bottom point of the checkmark and had to turn left to finish the final 115-mile leg to reach the Mississippi at St. Paul.

The river has cut new channels in places downstream of Mankato during periods of flood flow when the river's erosive power is greatest. A cut above mile 110 saved me 20 minutes of paddling by avoiding the longer meandering channel that the main portion of flow was abandoning. There were long stretches of river with little meandering in the reach down to Le Sueur, which I found to be less attractive and boring. However, the river banks appeared to be more stable and fewer cut banks were noted along this reach. In contrast to the reach above Mankato, water levels were not overtopping the banks. The current speed seemed less due its wider width but my descent was aided by warm winds from the south. Other than the city of St. Peter at mile 98, shoreline development was rare and tree-lined shores were the rule.

I had planned to camp at Le Sueur but was not impressed with the take-out to the campground and continued on in the hot afternoon sun with a sore bottom and stiff legs. No trespassing signs were quite common along both banks, which made finding a permissible campsite more difficult. I finally pulled out on the left shore at mile 76 under a mature stand of cottonwoods that cast a heavy shadow over an undulating floodplain containing sparse herbaceous vegetation. Two people on personal watercrafts, the first observed on the Minnesota, sped by along the shoreline but failed to notice my concealed encampment. The mosquitoes were terrible so I put on gloves and a headnet and quickly boiled water for dinner. My ritual of listening to the weather forecast before retiring was no longer possible since I had left my weather radio on at dawn this morning and had lost battery power. I felt disappointed and missed the monotonic computer generated prognostications of future atmospheric conditions - well maybe not. 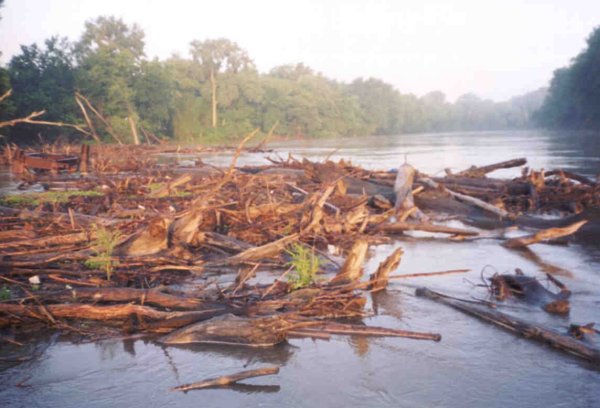