Fog and warm southerly winds marked my departure from the sandbar campsite at 5:45 a.m. The river had risen about a half of a foot based on the change in water level observed at my unofficial staff gage consisting of a stick placed at the river's edge last evening. I expected hot weather today based on clear skies and a warm early morning breeze.

Foam was more apparent on the river and I suspected it was due to an increase in dissolved organic material flushed in from overland runoff from yesterday's thunderstorms. Granite outcroppings occasionally marked both sides of the river and continued to seem oddly out of place in comparison to the more commonly observed eroding earthen banks. At mile 220, I noticed a large sand bar on the left with a great quantity of mussel shells washed up from the river. The shells were white and deteriorating from exposure to the sun and weather. At mile 215, a strong pungent odor reminiscent of burning tires filled the air. The foul fumes appeared to be carried up the river from the south. A glance at my topographic map indicated Redwood Falls wastewater treatment ponds were about a mile south of this location and could have been the source of the obnoxious odor, though I was somewhat skeptical of this hypothesis.

A torrent of reddish brown silt-laden water entered at mile 211.5 and marked the inflow of the Redwood River, which was out of its bank due to recent heavy rainfall in its watershed. To say that the stream was turbid did not adequately describe the brown viscous slurry. In my 20 some years as a water quality specialist, I have only seen one other situation that could have equaled its appearance and that was effluent from a hydraulic dredging operation on the Mississippi where the effluent concentration exceeded a total suspended solids concentration of 15,000 mg/L. The transparency of the Minnesota decreased from 20 cm above the inflow to 3 cm below the confluence based on measurements with a transparency tube. The character of the Minnesota changed drastically as a result of the Redwood's flow contribution and now contained plumes of muddy brown water with large tan colored foam bergs a drift on its riled surface. From this point to the mouth of the Minnesota, some 210 miles downstream, the transparency would never exceed 8 cm for the remainder of this trip.

Redwood River - "After proceeding another half day on the prairie, the party found itself on the banks of the ___ watapa, or the stream of the tree painted red. This is a beautiful rivulet, which was about eight yards wide where we crossed it. It runs in a wide and romantic valley. The bluffs on which rise on both sides, are formed of a fine white sandstone…The junction of the valley of the St. Peter with that of its tributary, about two miles below the place where we stood, occasioned an expansion of both valleys at that spot. The beautiful and diversified vegetation, springing luxuriantly on the banks of both streams, the rapid current of the waters rushing to one common point, formed a landscape, which, at that time, appeared to us as smiling and as beautiful as any we had ever beheld…"

Below Redwood River - "We got under way at half-past 2 P.M., and soon found the river diminsh from two feet and a half to one foot, the water beautifully transparent, and the unios stuck in countless numbers in the pure white sand, so that I could, by baring my arm, select them as we went along. The stream began to be very narrow; in once place the trees had fallen across, and it took us a long time to get through…we were constantly stopping to drag the canoe over the sand-bars and remove snags…"

I pulled out at 9:30 a.m. on the right bank about a mile and half below the Redwood River where a large granite mound rose up majestically out of the floodplain. The DNR has constructed four separate campsites that are spread out over this outcropping. The edge of the bank was moderately steep and slippery and required some care to climb out onto its muddy surface from my canoe. Numerous Spikes of prairie larkspur were distributed on the thin soils at the top of the rocky protuberance. The early summer vista of the lush vegetated floodplain under cloudless skies was quite attractive and provided a harsh contrast to the muddy brown torrent that flowed below.

In the mid-afternoon hot sunshine, I quietly approached two bank fishermen that were busy chopping down a small tree on the left bank about 1.5 miles upstream from the Highway 3 bridge crossing. They were startled by my sudden appearance since their eyes were affixed to this menacing tree that was apparently blocking their access to a nearby by boulder even though their fishing boat sat empty only a few feet away. In response to my questioning on their motive for removing the tree one of them responded, "someone had started the job and we're just finishing the work." A glance at their boat registration (IA 7541 AH) indicated they hailed from Iowa and they confirmed my deduction. Heavy sweat poured from their foreheads and they wiped it away with the back of their hands as they waited for my response. I indicated their behavior was quite disgusting since there was little purpose in removing it and they obviously did not have permission from the landowner to fell the tree. I finished my verbal admonition by suggesting that in the future they fish Iowa rivers instead.

At 4:25 p.m., I stopped at Renville County Park No. 4 on the left bank to check for camping possibilities. The campground was largely devoid of trees and the ground was muddy from yesterday's downpour. Young motorcycle riders and fancy cars operated by teenage drivers were visiting the nearby parking lot. Although I was tired and hungry, I decided to find more shade and solitude and headed down river in the hot sunshine to search for an alternative encampment.

I found a DNR campsite at mile 181.5 across from Kettner Landing and pulled out at 5 p.m. to set up camp on a slightly elevated bank heavily shaded with large silver maple trees. Two teenage Mexican Americans were fishing on the opposite bank while their nearby car blared out Latino music from its overpowered stereo system. I tried to set up my tent moving to the Mexican beat but my tired body couldn't keep up the pace. Fortunately they left after 15 minutes and peace returned to the forested floodplain while I ate a another hardy meal of freeze-dried camp food. The evening was warm and muggy and I was thankful for the shade of the wide spreading tree canopy above my tent. 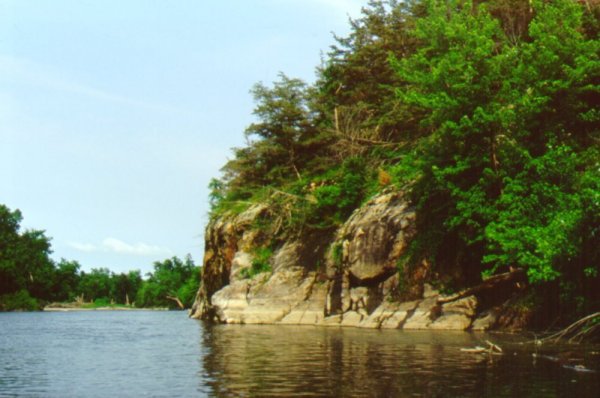