An orange eastern skyline brightened the darkness of the heavily forested floodplain as I departed from my mosquito lair at 6 a.m. A weak current provided some assistance to my descent through a narrow winding river channel heavily beset with downed trees, logjams and overhanging tree limbs and brush. Even with the current, my initial progress was slow averaging about 1 mile per hour as a result of the numerous obstructions. The thick overhead tree canopy with numerous birds and the river's narrow meandering through high earthen banks provided a jungle-like atmosphere and a stark contrast to yesterday's jaunt through the Big Stone refuge. An unexpected small rapids added to the intrigue of the unknown waters that lay ahead. Several raccoon and deer were observed foraging along the muddy bank and were startled by my approach and quickly sought shelter in the heavily vegetated floodplain. This wilderness experience was short-lived when I came around a bend and discovered discarded farm machinery and other refuse embedded into a moderately steep left bank. The river opened up and became less obstructed below the confluence of a second outflow channel from Highway 75 Dam. This is a newer and wider channel and likely blasts the river free of large debris during spring torrents.

Dark gray skies with southeast winds of 15 to 20 mph greeted me as I approached the inflow to the 4 mile long by 1.5 mile wide Marsh Lake at mid-morning. Strong gusts greatly slowed my progress through the shallow wind-blown lake. Where possible, I skirted emergent plant beds along the right descending bank but they only offered minor relief from the driving winds and frequently yielded water too shallow to canoe in. Sago pondweed was abundant in the littoral areas and also contributed to slower travel as a result of its added resistance on the hull of my canoe. Large carp were rooting around in these beds, and with the wind, contributed to moderately low transparency of about 1.5 ft. Several hundred pelicans appeared to be nesting on small rock islands in the southeastern end of the lake, though I was not able to confirm this activity since the islands were about a quarter mile away across a wind-swept portion of open water. Waterfowl were numerous throughout the lake with sizeable rafts frequenting the shoreline areas and like me, seeking shelter from the wind and waves. I finally arrived at the Marsh Lake Dam at 11:35 a.m. after a laborious open water crossing facing stiff headwinds.

Several pelicans were feeding on small fish that were attracted to the tailwater area of the Marsh Lake spillway as I portaged to the put-in below the dam. A few dozen more of these enormous birds were loafing on a small island a few hundred feet below the spillway possibly stuffed with fish since they did not move as I paddled by.

A little more than 2 miles down river from Marsh Lake Dam, I entered Lac Qui Parle or "speaking waters," a 12 mile long by ½ to 1 mile wide impoundment that is orientated in a northwest to southeast direction. Its voice was clearly heard from some distance upstream as strong southeasterly winds roared over its surface. As I finally rounded the last bit of protection from the emergent vegetation growing in the inlet to the lake, I was buffeted by gusts that almost turned my canoe around. Whitecaps stretched out for miles and the agitated gray colored water matched the dreary skies above. I quickly but reluctantly came to the conclusion that I was not going to make a successful passage of Lac Qui Parle this afternoon. The lake had spoken and I was obliged to heed its warning!

I pulled out about 1:30 p.m. on a sandy beach with scraggy-looking willows on the right bank about one-half mile below Highway 119. I had plenty of time to kill so I washed out the inside of my canoe since it had accumulated considerable amount of twigs, mud, dead insects, live spiders and spilled trail mix since departing on the Minnesota yesterday morning. I loafed around the beach after setting up my tent on a stony-sandy surface in the lee of a willow thicket. Having missed dinner yesterday, I made up for it today with a double helping of freeze dried dinners with plenty of trail mix for dessert. It was too windy for mosquitoes but wood ticks made a ground assault on my encampment from the tall grass south of my position, so I cowardly retreated to the confines of my tent after dinner to avoid the onslaught.

Lac Qui Parle - "Although we entered our first lake, Lac Qui Parle, that day, which was the Fourth of July, we had no opportunity to see how the Sans Souci ("without care") would behave in waves, for the water was smooth as glass… Coming out of the lake, the river was very small, running in a channel not more than forty feet wide. There were high weeds on each side and everywhere around us was low, marshy swamp. There was no place to stop. The channel would crazily, seeming to get nowhere…" 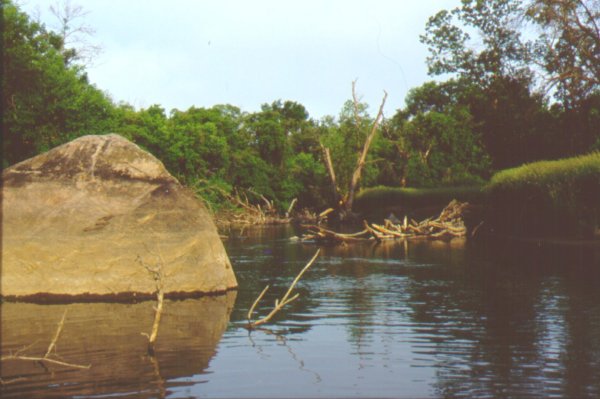