A heavy blanket of fog darkened the river valley when I awoke at 4 a.m. so I went back to sleep. The loud wining noise of a diesel engine from an up-bound towboat stirred me from my slumber about an hour later and a glance outside my tent revealed no improvement in the visibility. As the sound of the passing towboat slowly faded away I began to hear voices of children and adults talking and laughing. Since the utterance of these sounds seemed strange this early in the morning, I squinted out the screened doorway of my tent to locate the source of this commotion. To my surprise, two recreational boats carrying several people each appeared out of the fog and were tailgating the stern of the towboat. Apparently the operators of the runabouts were following he commercial vessel upstream which made its way guided by onboard radar, a feature lacking on the two smaller craft.

The visibility improved very little by 8 a.m. but I was anxious to be underway so I departed into a white cloud shortly later with a compass and river map as my navigational aids. I planned to cross the channel and follow the islands and Wisconsin's shoreline to Lock and Dam 4 at Alma. Within a few strokes of my paddle I had lost sight of shorelines and was adrift in a dense fog in the middle of the river channel. The sounds of a distant diesel engine were heard a few minutes later and I began to wonder if it originated from a towboat or a freight train. Although I assumed and wished for the later, I adjusted my heading to a bearing perpendicular to the river's flow and briskly crossed the channel with thoughts of the front end of a barge appearing out of nowhere in the gray-white mist. After about 30 strokes I began to make out the silhouette of a tree studded island and quickly headed towards this landmark. Along the way I passed a nun buoy that marked the edge of the right side of the channel. I had made a successful traverse of the channel and realigned my canoe to follow the foggy left descending bank as an early morning freight train headed north along base of Wisconsin's bluffs about one mile away.

Moderate fog still hung over the calm river as I reached Lock and Dam 4 at 8:45 a.m. while a down-bound tow was idling in the lock chamber. I ate a second breakfast of trailmix and waited for the lock gates to open. After twenty minutes I became impatient and approached the gates to gain the attention of one of the lock tenders. A man came out of the lock house and said, "the tow boat was waiting in the lock for the weather to clear." I was surprised by his response since the tow could have tied up downstream of the lock and not prevented its use by other boaters. I kept these thoughts to my self and asked permission to portage the riprapped embankment on the right side of the dam.

I departed into the rough turbulent tailwaters of Lock and Dam 4 at 9:30 a.m. just upstream of a fishing float just as the down-bound towboat was leaving the lock on the opposite bank. Strong currents quickly pushed my canoe towards a nearby fishing pier and I had to use considerable exertion to avoid colliding with its dock, which partially blocked my exit from the tailwater area. Several fishermen looked on with amazement and shock as my canoe passed by within feet of the obstruction and they had to stop their casting to avoid snagging my canoe. I apologized for my intrusion and was soon heading swiftly down river along the right bank.

A turbid Zumbro River entered along the right bank at mile 750.2 and yielded a transparency of only 5 cm, reminiscent of conditions observed in the lower Minnesota. In contrast, the Mississippi above the Zumbro had a transparency of 48 cm on the right bank with the river still benefiting from solids settling in Lake Pepin. The transparency of the Mississippi decreased to 25 cm below this tributary. Further downstream at Minneiska, Minnesota, the transparency had decreased to 18 cm and I attributed the reduction to an unseen turbid inflow from the Whitewater River, which discharges to the lower end of the Weaver Bottoms backwater.

My run down to Trempealeau, Wisconsin was conducted in warm weather under hazy sunshine with light winds from the south. I stopped briefly at the river with the same name and measured a transparency of 20 cm and noted beds of sago pondweed growing in its mouth. . Blue-grass music from the Trempealeau Hotel heralded my arrival to Lock 6 at 5:41 p.m. and a large crowd was on hand to enjoy the festivities. The requisite lockages up river at Lock 5 and 5a were quick and efficient owing to the absence of delays caused by commercial vessels. However, an up-bound tow was preparing to lock through Lock 6 and I had to wait a half-hour to continue my descent. I paddled over to the left shoreline and enjoyed the music and had a diner of trailmix and granola bar while waiting with several other runabouts and cruisers for our turn to enter the lock. I was again underway below Lock and Dam 6 at 6:30 p.m.

An orange sun fell quickly in the western sky as I left the main channel and entered Somers Chute shortly before 8 p.m. I decided to bypass Lock and Dam 7 at Dresbach, Minnesota due to the lateness of the day and instead headed to French Island landing via Lake Onalaska where I could portage over Dam's 7 earthen dike. This way I would avoid the risk of getting delayed at Lock 7 and I would avoid the heavy recreational traffic that plagues the river between La Crosse and Dresbach, especially during a warm summer's weekend.

The western edges of Lake Onalaska held great quantities of ducks, the most I had seen since leaving Marsh Lake on the upper Minnesota 10 days ago. Submergent vegetation was abundant in the shallows and dense emergent plant beds lined the shoreline as I descended the lake's western edge. It was too dark to make a transparency measurement but I noted a striking change in clarity and water color as I approached French Island. The brown turbid water quickly gave way to black clear water at the southern tip of Red Oak Island. I attributed this marked change in quality due to an enormous inflow from the Black River, which enters the lake at its northwestern end.

At 9 p.m., I reached the upper French Island boat landing and quickly proceeded to portage to the lower landing below the dike that provides access to French Lake, an isolated slough just upstream of Interstate 90. The lower boat landing was flooded with two feet of water and boaters were launching their crafts from the edge of the parking lot into French Lake for a night of camping on the river. The water was again dark and relatively free of turbidity, apparently still due to the influence of the Black River. I mounted my white strobe light on my stern and departed the landing in darkness.

I was surprised to encounter two fishing boats without running lights or flashlights in Smith's Slough, just below the railroad crossing, on my run down to La Crosse. They motored slowly up the slough and provided wide birth as I approached. Numerous boats were on the Black River but were fortunately traveling with bow and stern lights working and navigating at slow no-wake speed. I quickly traversed the Black River channel and ascended the mouth of the La Crosse River a few hundred feet and took out below the abandoned railroad trestle shortly after 10 p.m., some 500 miles from Lake Traverse. I had arranged to have my car parked nearby and quickly proceeded to transport my gear from the mosquito-infested grassy shoreline to my waiting vehicle and then made the final 2-mile portage to home. 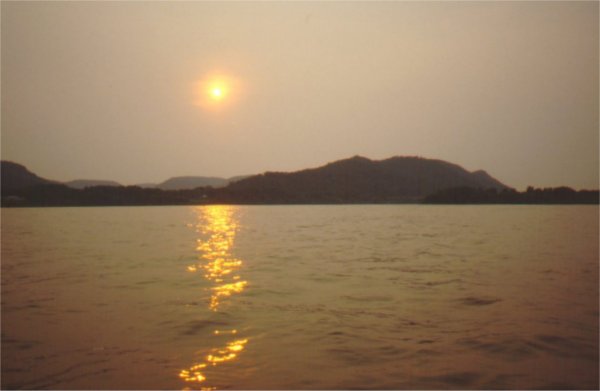