A slight fog hung over the river's surface while a full moon was falling over Chaska as I departed at 4:59 a.m. I was underway earlier today since I had wanted to reach Pool 3 on the Mississippi River near Prescott, Wisconsin. Three-quarter miles below my campsite, a mammoth culvert and concrete spillway was noted on the left bank. I assumed this was related to some type of flood control structure due to its size although I wasn't entirely certain.

Swift current propelled me past Shakopee at two feet per second shortly before 6 a.m. City noise increased noticeably as mid-week workers rushed to their place of employment over the Highway 101 bridge. Further downstream at approximately mile 23, pilings at a dilapidated commercial dock on the right bank was acting as a strainer to catch floating debris. A huge quantity of trees, logs, limbs and miscellaneous urban refuse had collected at the structure and partially blocked off the river's flow and resulted in substantial turbulence below this obstruction. Tall roller coasters with their blue, curved superstructure provided an unusual backdrop on the southern horizon at Valley Fair Amusement Park and were eerily quiet as I paddled by shortly before 7 a.m.

The U.S. Fish and Wildlife Service refuge lands were marked on both banks of the river at Mile 20 and comprised a considerable portion of the floodplain from this point down to the mouth. Strangely, the urban noise from nearby roads, occasional roar of overhead jets, cooling water intakes, wastewater discharge pipes, and marine docks seemed at odds with the refuge designation. On the other hand, the riverine corridor offered large isolated backwater lakes and marshes that warrant the protection of habitat, especially considering the proximity to the expanding the Twin Cities Metropolitan Area.

Clouds of sand blasting dust filled the air underneath the Highway 77 bridge as I passed underneath at 9:38 a.m. The metal superstructure was undergoing painting and although tarps were wrapped around the underside of the bridge, serious losses of paint chips and sand were emitted from the operation. I tried to shout my displeasure of the emissions to a nearby foreman standing onshore, but the loud piercing sound of high-pressure air nozzles masked my complaint. I then pointed to the dust cloud and shook my head with disapproval. He returned a smile and shrugged his shoulders as if to say, "oh well."

Shots of rapid gunfire rang out just below the Highway 494 bridge as I drifted by at 10:21 a.m. The source and the reason for the volley was not determined and I didn't care to investigate further. Since I didn't appear to be the intended target, I continued my descent while cautiously watching for snipers. I later noticed that two floodplain lakes, both named Gun Club Lake, were located on my right and presumed their names signified an active target range nearby. The roar of jet engines soon overwhelmed any further gunshot noise as I passed under the tall runway light towers for the southeastern approach to the Minneapolis/St. Paul International Airport where I had to cover my ears at times as a result of the low-flying aircraft.

Ascent of Minnesota - "The morning was bright, and our spirits were buoyant. The very thought that you are in a region where you depend entirely upon your own exertions and prudences, where the laws and regulations of society have no control over you, where everything is new, and where every hour may be pregnant with adventure, makes you at once bold and cautions, thoughtful and gay. I know not when I have felt more happy than upon this occasion; and it increased my satisfaction to see my men so sober in such fine spirits…"

Minneapolis to Hudson Bay - "We were off! The trail stretched ahead, a twisting stream of gleaming green water. As we began to paddle against the stiff current, we could hear a bugle playing and the guns firing at Fort Snelling. Overhead several airplanes were circling-not in our honor, for our start was inauspicious, but the unintentional salutations were timely. At the first bend I turned and looked back. Our families were still on the dock, watching. A few more strokes of our paddles and green willows slid out and hid the dock. We were alone with the green water, the mossy banks, and the trees which bent over the edge."

I pulled out on the left bank at a picnic area in Fort Snelling State Park to refill my water jugs for the run down the Mississippi to La Crosse. The picnic area was deserted even though the weather was warm and the sun beat down brightly on the forested floodplain parkland.

Clear skies and warm, windy weather marked my arrival to downtown St. Paul where the river became busy with river traffic and shoreline marinas and docks were numerous. At one point I passed within a canoe length of a riverside restaurant where noontime patrons gathered at small tables at the river's edge and they greeted me as a passed by in the swift choppy current. By the look of their attire, I was definitely underdressed and continued on with out stopping for lunch.

The Mississippi makes a broad, 10-mile long, inverted U-shaped turn as it cuts through St. Paul as it aligns itself to flow in a southerly direction. Bridge crossings were numerous and present a particular hazard at Raspberry Island (now Navy Island) below river mile 840 where two road bridges and one railroad crossing obstructed the narrow channel in a quarter-mile stretch of river. The river widened somewhat a short distance downstream where the Port of St. Paul is home to commercial marine towing services and the St. Paul Barge Terminal. The terminal is essentially a parking lot for barges that are waiting loading or unloading of various products including grain, cement, fertilizer, coal, scrap iron and other items. The barges were parked one to three wide deep along both banks of the river in portions of this reach.

The Twin Cities Metropolitan Wastewater Treatment Plant's effluent, the largest point source wastewater discharge above St. Louis, is discharged into a narrow channel on the east side of Pigs Eye Island No. 1 above mile 835 along the left descending bank. Roughly 200 million gallons of treated municipal wastewater is discharged to the river every day at this location. I paddled a short distance upstream into the tree-lined effluent channel to assess its quality at 1:30 p.m. The effluent emitted a mild sewer odor but the cool wastewater provided a relieving chill to the air. The effluent was extremely clear and I could see fish scurrying away from my canoe as I ascended up the channel. In contrast, the Mississippi above this wastewater discharge had a transparency of only 6 centimeters and it was impossible to see anything in the murky water. Although the effluent's suspended solid concentration was very low, I had no way of assessing the dissolved constituents of this effluent which contributes important sources pollutants to this section of the river. Still I was impressed with the clarity of the effluent since it was the clearest "stream" I had seen since leaving Big Stone Lake nine days ago.

Citizen volunteers were out in full force in boats collecting trash along the banks of the river from St. Paul to 15 miles downstream. I found the product of their arduous labor in a large commercial barge that was parked along the right bank above Spring Lake and it held a substantial quantity of refuse pulled from the river. I topped briefly to compliment the workers on their deeds and to take a picture of some of the participants. Their effort was part of a Mississippi River Beautification & Restoration Project that extended from the Twin Cities to Prescott, Wisconsin.

Strong westerly winds assisted my 10-mile descent to Lock and Dam 2 at Hastings, Minnesota. The wind swept portion of lower Pool 2 was a mass of whitecaps and I was thankful for the tailwinds. However, once I reached the dam I had to wait in very rough water in an exposed area above the lock for about 20 minutes before the lock chamber opened for the drop to upper Pool 3.

Over two dozen Hmong fishermen were standing in water up to their waists at the mouth of the St. Croix River at Prescott, Wisconsin. Fishing lines were everywhere as I carefully avoided them and headed upstream a short distance at 6:30 p.m. to make a transparency measurement. The reddish-stained and relatively clear waters of the St. Croix converged with the brown muddy Mississippi at mile 811.3. The sharp contrast in turbidity formed a liquid demarcation of the state boundary line between Minnesota and Wisconsin that could be seen for several hundred yards downstream.

I pulled out at 7:21 p.m. on a sand bar along the right bank of the Mississippi at mile 807.5. My bottom was sore and my legs were stiff having spent about 14 hours sitting in the canoe today. However, I was pleased with my progress of 67 miles. The sand was still very warm from the radiant energy of the day's bright sun and provided discomforting heat inside my tent during the early evening hours. I slept restlessly until the warmth was countered with cool evening breezes. 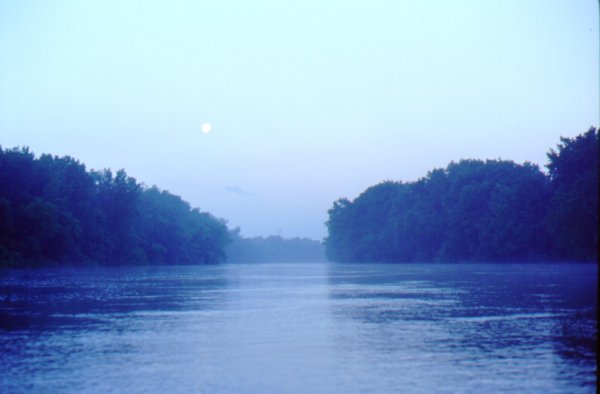