A cackling pheasant in a nearby thicket provided my wakeup call at 5 a.m. After a quick breakfast of trailmix and water, I was eager to get going and quietly prepared my gear for a short portage to the landing a few hundred feet away as several cattle watched with some trepidation. Forty minutes later, a large Angus bull standing along the stony shoreline near the landing, announced my departure to everyone in the campground with a continuous loud bellowing as I departed. Though I felt sorry for Beth, the boisterous sendoff was a fitting response to make up for the adolescent festivities of last evening. I laughed to myself as I headed southwest up the placid, clear, boat-free lake in the cool morning air with a beautiful sunrise at my stern.

I pulled out at a boat landing at the southern end of Lake Traverse shortly after 7 a.m. and quickly prepared my canoe carrier for the 1.5-mile portage to the Little Minnesota River at Browns Valley, Minnesota. Beth showed up just as I was entering the small community that rests between the two huge basins, one draining to the Gulf, the other to Hudson Bay. She complained of being awakened by a cow and wasn't able to return to sleep after this noisy arousal. I laughed and indicated a steer was proclaiming my departure to La Crosse and was pleased with the sendoff. She took a few pictures and was soon heading home by car as I walked through the village on a quiet Sunday morning.

The Little Minnesota River is a tiny stream with steeply cut banks that meanders its way southeastward from South Dakota, the current headwaters of Big Stone Lake. At 8:43, I was in the Little Minnesota near Renville Street. The swift flowing stream was relatively clear and chilly and offered a hard sandy and rocky bottom for poling. Towering trees and tall shrubs lined the stream bank and offered welcome shade to the bright sunshine. Water depths were insufficient in many places so I had to resort to wading and pulling the canoe downstream. Numerous deadfalls and one channel-blocking snag slowed my descent to about 1-mile per hour. Fortunately the bottom substrate was comprised mostly of sand with small amounts of silt and clay and provided a firm surface for wetting my boot-covered feet.

Little Minnesota River - "After having left the Big Stone Lake, we crossed a brook which retains the name of the St. Peter, but which cannot be considered as part of that river; the St. Peter may, in fact, be said to commence in Big Stone Lake, and this to be but a small tributary from the Corteau des Prairies; it was less than seven yards wide. This stream soon leaves the main valley and turns to the west, where a lateral trench in the prairie, known by the name of a "Coulee", gives it a passage."

As I approached Big Stone Lake, the high banks disappeared and the floodplain spread out into an impressive half-mile mile wide wetland. The current speed slowed and the bottom became more muddy. Huge carp were spawning in the shallows and contributed to turbid plumes of silt and clay and resulted in a dramatic decrease in transparency. Sparse beds of pondweeds were encountered and appeared to be carp's preferred habitat.

Several fishing boats were encountered at the mouth of the Little Minnesota River where the massive waters of Big Stone Lake lay stretched out before me for 25 miles. I decided to descend the right bank, which would offer more protection from the 6 to 15 mile per hour northwesterly winds that were sweeping across the lake from the Dakotas. The upper end of Big Stone was very turbid due to the rooting activity of carp and the moderate winds that riled up the lake's bottom. However, the clarity improved considerably as I made my way down the lake. The grass and tree-covered hillside along the three-quarter mile wide lake rose up gradually to a few hundred feet above the lake's sky blue surface. The view was quite attractive and broke the boredom of paddling large open water.

Big Stone Lake - " I suddenly came to an abrupt and lofty bank, and looking down, beheld one of the most beautiful lakes I had ever seen in North America, describing for a great distance very graceful curves, with fine bluffs about 200 feet in height, and well-grown woods covering the slope beneath me down to the water's edge. I saw at once that this sheet of water was the remains of the river that once occupied the whole of this valley, just as Lake Pepin occupies the mean breath of the Mississippi at the present day; the breadth of this lake, which is about two miles and a half, corresponding to the general breadth of the valley of the St. Peter's."

The shoreline in the upper end of Big Stone was largely undeveloped though cattle were occasionally seen in dry grassy pastures or were wading in the lake and were chased from their late morning bathing as I paddled nearby. Beds of submersed aquatic plants were infrequent and were restricted to shallow water.

Fishing boats increased in numbers as I progressed in a southeasterly direction. A large flotilla of bass boats were observed speeding towards a fishing dock at Hiawatha Beach along South Dakota's shoreline. A large crowd along the shore gathered to watch this procession and I could hear loud speakers announcing the arrival of various boats with some fanfare. It wasn't until I was a few hundred feet away that I realized that a fishing tournament was in progress. As I attempted to pass the weigh-in station, I was almost hit by a one of the overzealous contestants who carelessly drove his craft within feet of my bow as he raced towards the dock with his prized catch of walleyes. Fortunately, most of the large ensuing boat wake that crashed over my bow was kept from my canoe by my spray cover. The inconsiderate boat driver didn't even bother to turn around to see if I was still floating. I quickly left the area and sought refuge along the western shoreline.

By mid afternoon I had reached the central portion of Big Stone Lake. Submersed aquatic plant beds were more common and extended into deeper water presumably due to an improvement in water clarity. However filamentous algae was covering most of the plant community and small irregular-shaped globs of gray-green algae were observed floating near the surface, a probable sign of eutrophication. Numerous watercraft consisting of jet skis, fishing boats, pontoon boats, ski boats, and general runabouts pulling tubers or carrying sightseers were riling up the lake and contributed to a constant chop.

Shortly after 5 p.m., I reached Big Stone Lake State Park where I was eager to depart from the canoe to stretch my legs and make a hot dinner. I was thankful for the relatively light winds today and for my progress of 30 miles. The campground was almost empty, a sure sign of a peaceful evening and the end to an early summer's weekend. I set up camp at site 14 and took a relaxing shower to revive my sore muscles. After a dinner of beef stew and a reconnoitering of tomorrow's canoe route, I sought the comfort of my tent and sleeping bag shortly before 8 p.m.

"Big Stone Lake terminates in a plain flat marsh, and, by my computation, is about thirty-six miles long, and two miles broad…From the termination of the lake the valley continues with the same breadth to Lac qui Parle, but the channel which connects the two was, at the period of my visit, and owing to the drought, not even navigable for a canoe…We crossed over to the east side, about two miles from the termination of the lake, and soon after came upon a countless number of masses of granite in place, occupying three or four hundred acres of land…I certainly never saw a more curious spectacle, and perceived at once that the Indians had named the lake Ea-tatenka, or "Stones-big," from these masses." 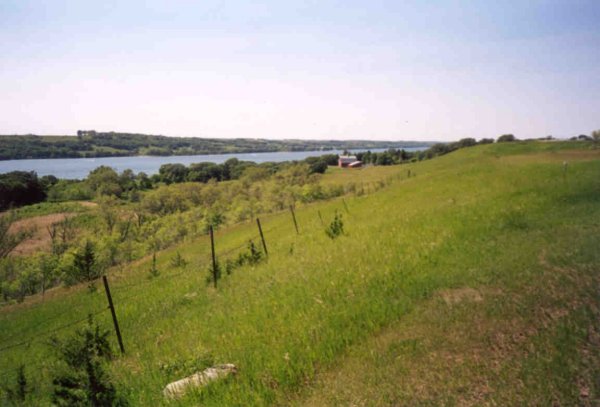