I awoke to a very cold mid-June morning with air temperature of only 50o F as a result of a passing cold front. The nearby boat ramp was already in use by 4:30 a.m. by eager fishermen and more arrived at fifteen minute intervals for the next hour our so. I slept in as a result of a poor night's sleep and an expected fast run down to the Mississippi and was underway at 8:15 a.m. under bright blue skies. Swift currents quickly propelled my craft downstream as a result of the surplus flows of the Cedar River with an added assistance from moderate northeasterly breeze.

Water quality measurements made on the left and right descending banks indicated a strong lateral gradient in conductivity and transparency as a result of incomplete mixing of the Cedar's turbid and higher conductivity inflow. This difference in quality was found to persisted for about twenty-five miles downstream. Unfortunately my dissolved oxygen probe stopped functioning properly below the Cedar River. I found out later that the probe's polyethylene membrane had become fouled with a film of silt and clay in response to frequent use in the turbid water.

The Iowa below the Cedar's confluence resembled a truly "large river" with widths of 400 to 600 ft. Numerous islands and secondary channels were present and presented a sharp contrast to the reach from Coralville Reservoir down the mouth of the Cedar. Sandbars became more frequent as well, probably in response to the additional and more variable flows afforded by the Cedar River.

Wapello, Iowa sits on a 30-ft high terrace on the right bank where the river made a sharp 90 degree bend to the southeast. The city has armored the banks with an impressive mosaic of boulders and large rock to resist the erosive currents and to protect the riparian residential development that lies dangerously close to the river's edge.

Navigable Reach - "In 1868 the State legislature adopted resolution to ask Congress to declare the Iowa River north of the city of Wapello not navigable." (This was done in response to citizen's interest in bridge construction, especially for the railroads.) On May 6, 1870, an act of Congress was approved declaring the Iowa River unnavigable above Wapello, and the first bridge spanning the river at that point was completed by 1874".

Isolated lakes and long finger-like dead-end sloughs spanned the eastern-forested floodplain 10 miles upstream from the Mississippi. This large backwater is only connected with the river in times of flood. A large portion of this floodplain was inundated by water during my descent but entry into or egress from this heavily vegetated haven was not discernable from the river.

A row of old cottages and house trailers lined a 20 ft high steeply eroding right bank downstream of Otter Creek. Portions of sheds, old lumber and miscellaneous refuse were scattered on bank and formed a disgusting view. No attempts have been made to retrieve this horrific pile of junk. It was not known if this material was intentionally added as a form of erosion protection or a means of solid waste disposal. Based on its ineffectiveness, I assumed the later.

The Iowa made a final broad sweeping bend near Oakville and then ran past a series of large islands in its 4-mile northeasterly path to the Mississippi. The current velocity slowed down appreciably as I approached a flood-swelled Mississippi. The floodplain was inundated by several feet of water at the Iowa's Mouth as reflected by partially submerged restrooms at the Ferry Landing on the right descending bank.

At 14:45 p.m., I entered the Mississippi and its strong current quickly carried my canoe downstream. The river's transparency was several centimeters greater and its conductivity was substantially lower than the Iowa's, the result of reduced suspended particulate matter and dissolved solids, respectively. I paddled briskly across the half-mile wide Mississippi and took out at a boat ramp at New Boston, Illinois. The ramp was active with boaters coming and going and numerous sightseers had gathered at the bank to watch the floodwaters flow by. I cleaned up my gear and talked to inquisitive visitors about my run down the Iowa while waiting for my wife to take me home. A beautifully clear, cool afternoon - a great day for canoeing the Iowa.

Iowa - "Her affections, like the rivers of her borders, flow to an inseparable union". 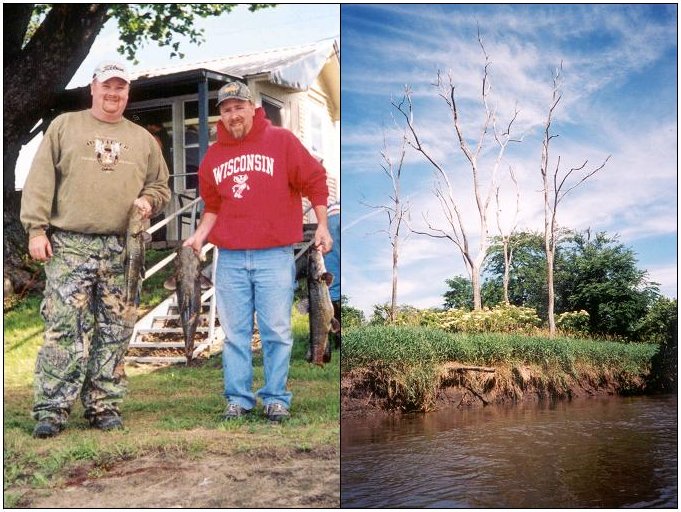