My riverside campground was noisy as a result of the nearby quarry elevators and the associated bulldozers and trucks. The night shift ended at 11 p.m. after which peace finally descended upon the Iowa's valley. Barred owls were active again through the early evening and their calls became more alluring once the earth mining operation had ceased for the evening. I awoke to overcast skies and very humid conditions at 4:30 a.m. I departed the beach about an hour later and was pleased to see that the water levels had fallen three-tenths of a foot since last night. The current was still swift and carried a heavy load of silt that colored the water golden brown.

Past fires have blackened tree trunks and have left large portions of the floodplain below Belle Plain with dead or dying trees and thick ground coverings of reed-canary grass. It was not known if these fires were accidental or intentional, but the absence of wildlife suggested a negative impact by the holocaust.

The river has cut a new narrow channel across a towhead a mile below Koszta Access, which shorted my descent by a half mile. A large sandbar formed along the shoreline at the head end of the cut where the river's bedload deposited a large mound of sand.

Serious bank erosion was noted in reaches between Bell Plain and Marengo. Owners of old cottages and fishing shacks have fought a losing battle with the river in attempt to stabilize or protect their shorelines from the river's erosive forces. Although the landholders have resorted to a broad assortment of armament consisting of tires, concrete, logs, brush and rocks, their methods of engagement have largely been ineffective and the river continues to cut an unconstrained meandering path in the broad floodplain as nature has intended.

Downstream at Marengo, a huge earthen floodwall has been constructed on the city's north side to prevent the Iowa's floodwaters from entering the low-lying community. A large circular borrow pit, connected to the river by a short narrow channel, was dug as means of obtaining the fill to construct the massive long dike. I needed to obtain drinking water so I entered the borrow pit to find a landing where I could secure my canoe and seek water in Marengo.

Two fishermen in a small boat were fishing just inside the lake-like cell and were pulling out small crappies as I entered the backwater. The transparency of this artificial lake was 40 cm or about 5 times that of the river. The water contained small planktonic algae that reflected a light green hue, a striking contrast to the turbid brown river. The fishermen provided information on where I could obtain water and assurance that my canoe would not be disturbed if parked along the base of the levee.

I took a three-quarter mile walk along the top of the levee to the northside of Marengo. I stopped at one residence but nobody was home. Down the street and around the corner, a large woman was vacuuming the inside of her old Dodge that was parked in the driveway of her small home. I tried to get her attention by waving my empty two and half-gallon water jug in the air as I walked down the street then stopped at the edge of her driveway and shouted, "Excuse me."

She looked up startled and then fumbled to find the switch to turnoff the noisy vacuum and then returned an inquisitive stare waiting for my response.

"Hello, I am canoeing the river and need drinking water. Would you have a garden hose that I could use to fill up my container?"

She looked me over carefully and then responded, "I don't have a hose, but I guess I could fill your jug inside if you really want some of our water." She dropped her vacuum hose and reluctantly approached to grab my container but then hesitated and said, "You know, our water is really bad, and it has a funny smell to it, are you certain you want to drink it?"

I chucked and briefly glanced around the neighborhood to see if an alternative Marengo resident would offer similar testimonial to the quality of the local water supply but nobody was insight.

"Well thanks for the warning, but I don't have any other options and will have to take my chances."

"Okay, that's up to you, but I only drink bottled water." She reached out her hand to grab my empty jug and headed to her side door. She returned a few minutes later and laid the container full of water at my feet. "Well here you are."

"Thank you very much. I appreciate your help."

She smiled and walked back to her car to resume her vacuuming while I lugged the heavy load back to the canoe, stopping frequently to switch my carrying hand. The sloshing water had a light orange color, possibly suggestive of a high iron content. However, I noted no displeasing taste or odor when consumed later in the trip.

The two to three hundred foot wide river channel cuts a 1 mile wide meandering path through the grassy-forested floodplain on the run down to West and South Amana. Large areas of pastureland were noted but were devoid of farm animals. Sandbars were inundated or were too low to offer suitable sites for camping. The distance between the river's level and the top of the vegetated banks decreased to 1 to 2 feet as I approached the upper end of Coralville Reservoir. I attributed this to the high river stages and the backwater effects of the downstream impoundment. However, the current was still strong and there was no apparent solids settling since the river's transparency was relatively stable averaging about 8 cm.

Due to high river stages, I passed over the Amana Society's low-head dam above West and South Amana without even knowing it was present. A 7 mile long diversion canal or millrace on the left bank was constructed in the 1860s to provide waterpower for the Society's woolen mills. The canal's levee suffered serious damage during the 1993 flood, which forced the shutdown of a small hydropower facility at Amana. The Society has received funding to repair the canal and the system is expected to be functional again in 2006 (Lanny Haldy, Amana Heritage Society).

At Middle Amana, a railroad bridge spanned the river and 2-mile wide floodplain. The concrete bridge abutment had trapped substantial woody debris on the upstream side and blocked the right side of the channel. The river turned abruptly to the right and fell a few inches as it raced under the bridge, the result of the constriction caused by the adjacent blockage. An exceptionally strong eddy and sluice hole was present just below the center bridge support and my canoe was spun 180 degrees and pulled into the hole towards the back side of the abutment where the river level was lower. I sat there for a few minutes and watched in awe as the swift waters passed under the bridge and formed a huge boil of brown, frothy turbulent water.

A thunderstorm was approaching at 3 p.m., but I was having no luck in finding a suitable campsite. I had not seen any sandbars since noon and the water levels were approaching the top of the fire-scared, sparsely forested floodplain. I was beginning to worry that I would soon be at the upper end of Coraville Reservoir where the floodplain would certainly be inundated with river water. Then at 3:30 p.m., I rounded a sharp bend upstream of Amana and found one of the highest and largest sandbars I encountered on my entire trip - my prayers had been answered. Amana!

I pulled out and quickly set up my tent and lashed its corners to the ends of driftwood that I had buried in the sand. Next, I tied up the canoe in a deep hole on the backside of the sand bar, weighted it with camping gear and secured my canoe cover. Strong winds and driving rain pelted my campsite at 5 p.m. at the storm's onset, but then subsided to a gentle cool rain through the early evening.

The Amana Colonies - "In 1842, 800 German Inspirationists settled near Buffalo, New York, and began to practice full communal life institutionalizing precepts concerning dress and lifestyle. For economic and spiritual reasons, however, the group bought 18,000 acres in Iowa in 1854 and called their new home "Amana," a word taken from the Old Testament Song of Solomon, which means "to remain faithful." In 1932, the year of the "Great Change," the communal way of life was discontinued. Strict regulations on dress and lifestyle have also been gradually eliminated. Church life itself, however, continues with its spiritualistic pattern and simple form of worship, in unadorned meetinghouses. Despite the large number of visitors who come to the Amana Colonies each year, many unique cultural traditions remain and are, in fact, affirmed and passed on from generation to generation". 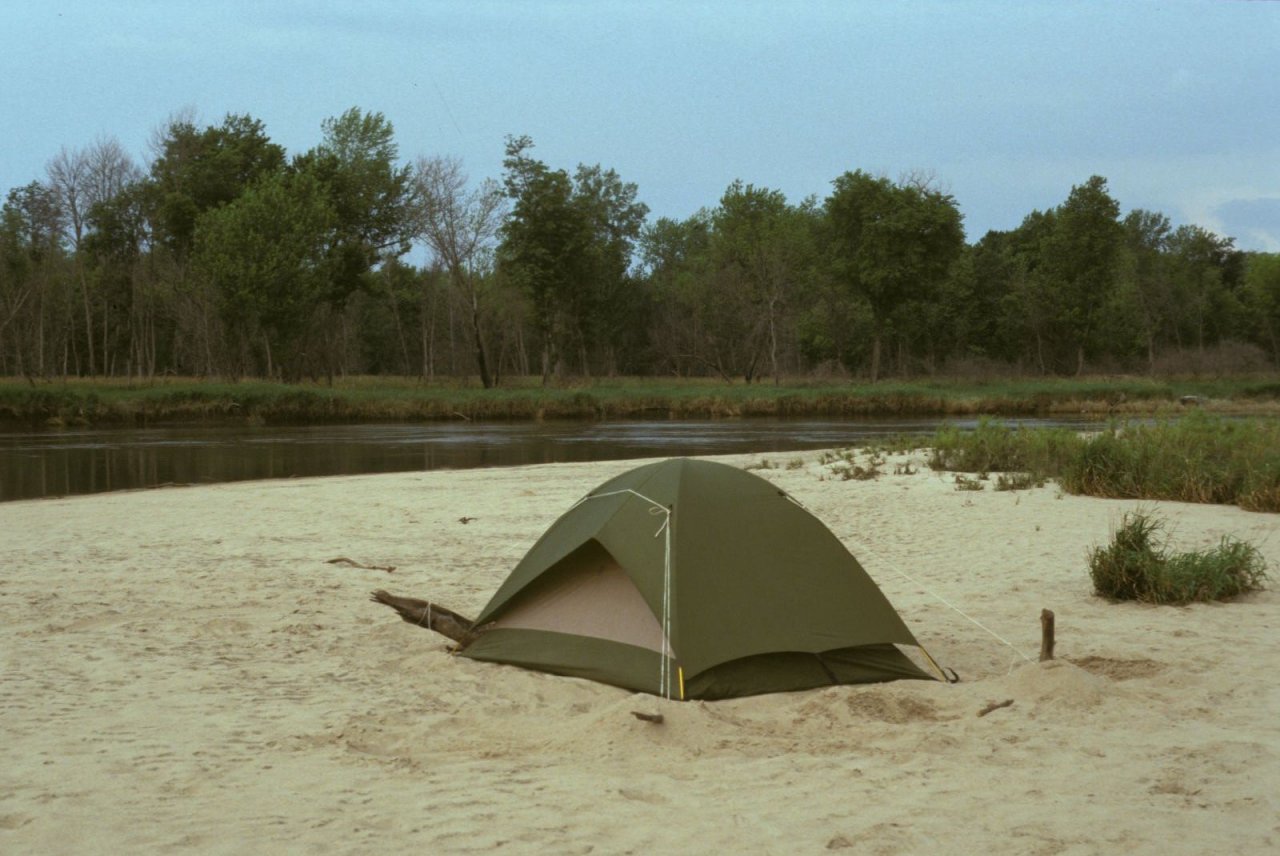