Rain commenced at 4:15 a.m. but stopped about an hour later. I broke camp quickly after the rain ended and was underway shortly before 6 a.m. under pink overcast skies.

The river meandered wildly under steep forested hillsides in the run down to Steamboat Rock and offered spectacular scenery. The river was still running fast and was colored yellow-brown from the heavy concentration of suspended sediment eroded from upstream banks and farmland. A two hundred-ft high shear clay treeless bluff located about 2 miles below Hardin City Access contributed to the sediment load as the river ate away at its base.

I took out at Pine Ridge Recreation Area on the right bank at 8:30 a.m. to make the portage around Steamboat Rock Dam. The portage was less than a mile and the path followed a gravel road above the dam. Along the way I stopped at a scenic overlook to rest and take pictures of the low-head dam, which lay just below. Huge logs teetered on the spillway and the river valley was filled with the roar of falling water. The tailwater was turbulent and white due to the entrainment of air and the formation of foam on its riled surface. I crossed a bridge below the dam and found a paved bicycle path that followed along the east side of the river. I put-in at a small sandbar that had formed immediately below a concrete abutment that supported a railroad bridge.

I encountered the first fisherman on my trip on the left bank at Tower Rock County Park a quarter mile below the railroad crossing at Steamboat Rock. He indicated that he hadn't had any luck. Just down river, twenty-foot high rock outcroppings rose up on the left bank. The heavy forest canopy hid the apparent monolithic namesake of the park from my position on the river.

Gold on the Iowa - "In 1852 a small amount of gold was discovered in the shoals of the Iowa River a few miles north of Eldora and for a brief time there were 500 to 1000 people camped in tents and wagons between Eldora and Steamboat Rock. Settlers were so busy panning for gold that they forgot about their farms and little was accomplished that year".

Deadfalls and shoreline debris contained increased quantities of garbage as compared the reach from Belmond to Iowa Falls. Sandbars became more noticeable below Steamboat Rock but were generally small in surface area and elevation. The river widened considerably below the East Fork of the Iowa River, which entered on the right several miles below Eldora. This inflow nearly doubled the Iowa's flow but yielded similar brown, turbid water with slightly greater conductivity. Huge chunks of concrete pavement were piled 15 to 20 ft high on the eroding right bank just downstream of the East Fork. Gravel bars were observed downstream and sand bars increased in size and frequency below this major tributary.

A few miles below Union, at the Hardin-Marshall County border, the river takes on a completely different character as a result of channelization and straightening conducted in the early 1900s in an attempt to improve drainage for farming. The shorelines had moderately steep 6 to 8 ft high banks though they were mostly vegetated with small trees, shurbs and grasses. Connected backwater sloughs or secondary channels were absent. I found the paddling to be extremely boring due to the absence of bends and meanders that characterized the reach upstream and which offered substantially greater wildlife viewing opportunities.

Channelized Portion - In 1918 to 1920, the Iowa was straightened "to promote better drainage of adjacent farm lands. Ironically, many farmers could not pay the ditch tax assessment, lost the farm and the land was still wet. Dredging ended at the Iowa Veterans Home (in Marshalltown). Approximately 8.2 miles of the river were eliminated by the channel straightening. Wildlife habitat was several reduced and the natual flood abatement function of the floodplain was lost".

The river returned to wild meaderings and sharp bends at Marshalltown. A strong eddy and pronounced turbulence with massive boils were encountered at the first bridge crossing at Center Street where the river ran over the site of an old mill dam, passed under a bridge and turned 90 degrees to the northwest. The agitated current with powerful eddy was impressive and a bit unnerving to surmount. This short passage presented the most challenging canoeing since my departure at Belmond 111 miles upstream.

I initially planned to pull-out at Riverview Park at Marshalltown but the take-out was extremely muddy and the grounds were rutted with vehicle tracks. A nearby sign warned of a low-head dam a quarter-mile downstream and I decided to inspect the dam and search for a campsite below this structure. The dam presented little problem as a result of the high river stage and the overflow only created fast water and a minor riffle.

I found a large sand bar on the right bank about a quarter-mile below the dam and pulled out at 5 p.m. The top of the bar was about 2 feet above the river's surface. My tent was placed at the zenith of the sand mound and was exposed to the hot late afternoon sunshine. The tent's interior temperature quickly climbed to 95oF and didn't fall below 90 oF until shaded by the floodplain forest on the west bank at 7:45 p.m. The evening was calm and clear and I took the opportunity to "bathe" in the cool muddy Iowa before retiring. 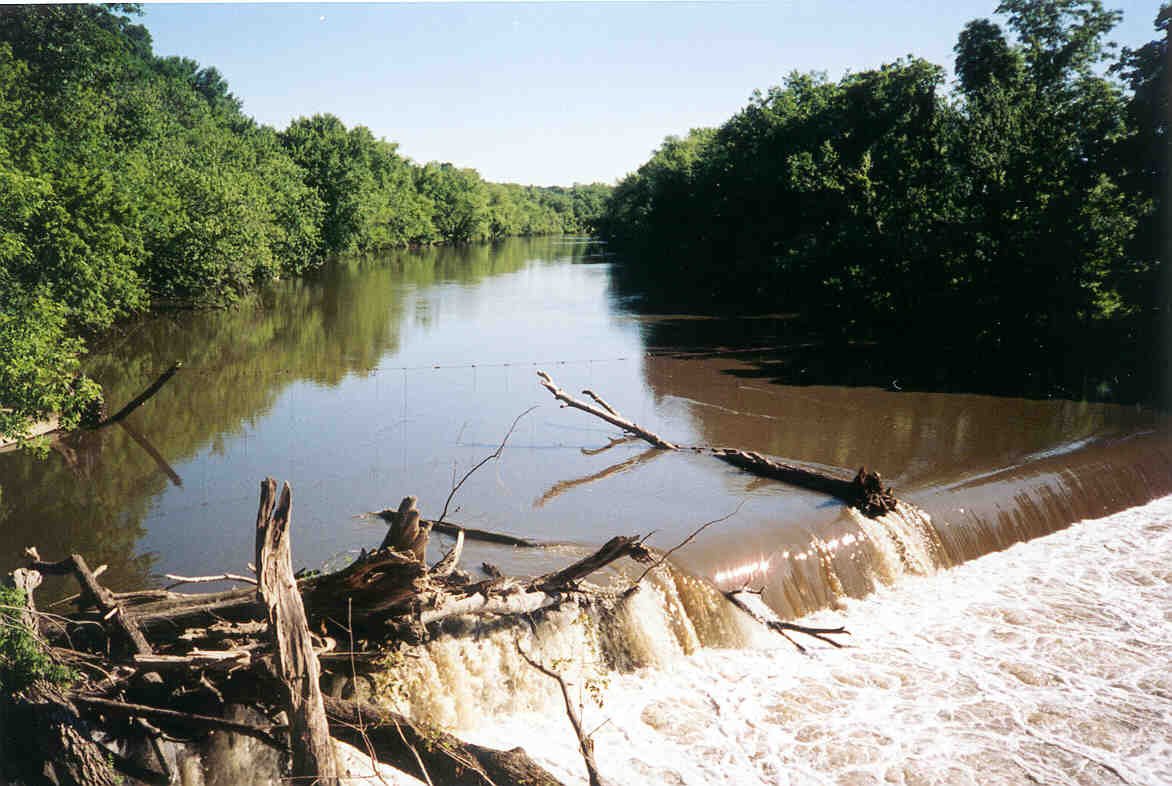