Beth and I arrived at the city park in Belmond in late morning after a three-hour drive from La Crosse. The river was swollen with brown turbid water following recent heavy rains. Belmond lies just below the "forks" of Iowa's west and east branches. The stage was high enough that I could have probably started at the source of the Iowa's West Branch at Crystal Lake. However, the upper portion of the Iowa has been extensively ditched and I had no idea concerning its "canoeability", even during high river stages. The thought of running into barbwire fences and camping in muddy cornfields didn't appeal to me. So, I started at Belmond, which marks the official starting point for a trip down the Iowa.

Iowa's Source - "The Iowa River flows from Crystal Lake in Hancock County at an elevation of 1265 ft above sea level. For 329 miles it meanders towards the Mississippi, falling in that distance 685 ft." The East and West branches "are virtually drainage ditches, the west fork actually being dredged to carry the scanty flow from Crystal and Eagle lakes".

Mosquitoes bit ferociously as Beth and I were unloading my gear from our car and carrying it to the river's edge at the local riverside park in the warm mid-day sun. My pre-trip discussions with area fisheries biologists and county conservation staff had warned me of the massive swarms of mosquitoes that had developed along the Iowa's inundated floodplain in the recent days. Considering the abundance of theses pests at high noon, I dreaded the multitude that would likely appear by dusk when their numbers would be magnified several fold by those presently hidden at the base of streamside grasses, forbes, thickets and darkened haunts of floodplain forest.

I bid farewell to Beth and shoved off the flooded rip-rapped bank 11 a.m. The current was very strong and quickly pushed me backward downstream along with the roily silt-laden water while I settled in and secured my maps, canteen and camera. After recording a mere transparency of only 4 cm, a grabbed my paddle and turned my green, fiberglass solo canoe around and headed towards the Mississippi.

Early Fisheries Survey at Belmond - "At Belmond the river is from 20 to 40 ft wide. A dam at this place backs the water from some distance above. We collected below the dam, where the bottom was gravelly and sandy. There is much vegetation in the river a short distance below the dam and a weak growth of timber along its banks. The water was clear, the current rather slack, and the river unusually slow".

Low lying canopies of willows and silver maple trees arched over the river and offered a narrow sylvan corridor for my downstream passage. Numerous downed trees and limbs along both banks captured smaller floating debris and vigilance was required to avoid them as I paddled a meandering path near the channel's center. Debris dams became more numerous as I approached Pikes Timber County Park in the mid-afternoon. One dam completely blocked the channel and required a short portage along the forested bank. My disruption of the understory vegetation during my portage awoke the mosquitoes from their haunts and forced me to put on my green fine-meshed headnet and paddling gloves to avoid the onslaught while I performed the carry.

The bottomlands along the Iowa were teaming with wildlife in the frequent reaches where vegetation was thick and removed from pastureland or cultivated land. Two to three deer were seen or heard for every hour of paddling during my afternoon descent to Rowan, Iowa. I suspected I passed an equal number of deer that remained quiet and hidden from my view. Broods of wooducks, mallards, and geese were common and rushed to hide in the shoreline vegetation as I approached. Great blue herons were numerous and erupted squawking displeasingly as I aroused them from their stream side perches on dead limbs or toppled trees that rested partially in the river. An occasional barred owl was flushed from the canopy of large silver maple trees and was often followed by a small flock of black birds that gave chase and dove upon the bird of prey as it made its escape to a retreat deep within the tree-covered floodplain.

I pulled out for day on the right bank just downstream from Ditch No. 213 at 4:45 p.m. as a storm approached from the west. The wet, muddy floodplain soils were only about one foot higher than the Iowa's surface. I managed to fine a thin bed of tall grass and herbaceous plants to layout my ground tarp and avoid direct contact with the muddy soils. The base of small silver maple trees and floodplain driftwood provided a convenient anchor to lash down the corners of my tent. A quickly approaching bluish-gray wall cloud hastened my unpacking, setting up camp and securing the canoe. Within fifteen minutes, fifty mile per hour winds and driving rain forced me to retreat to the shelter of my tent. The thunderstorm passed quickly, but high winds and rain persisted throughout the early evening so I dined on trailmix, an apple and a granola bar instead of a re-hydrated dinner. 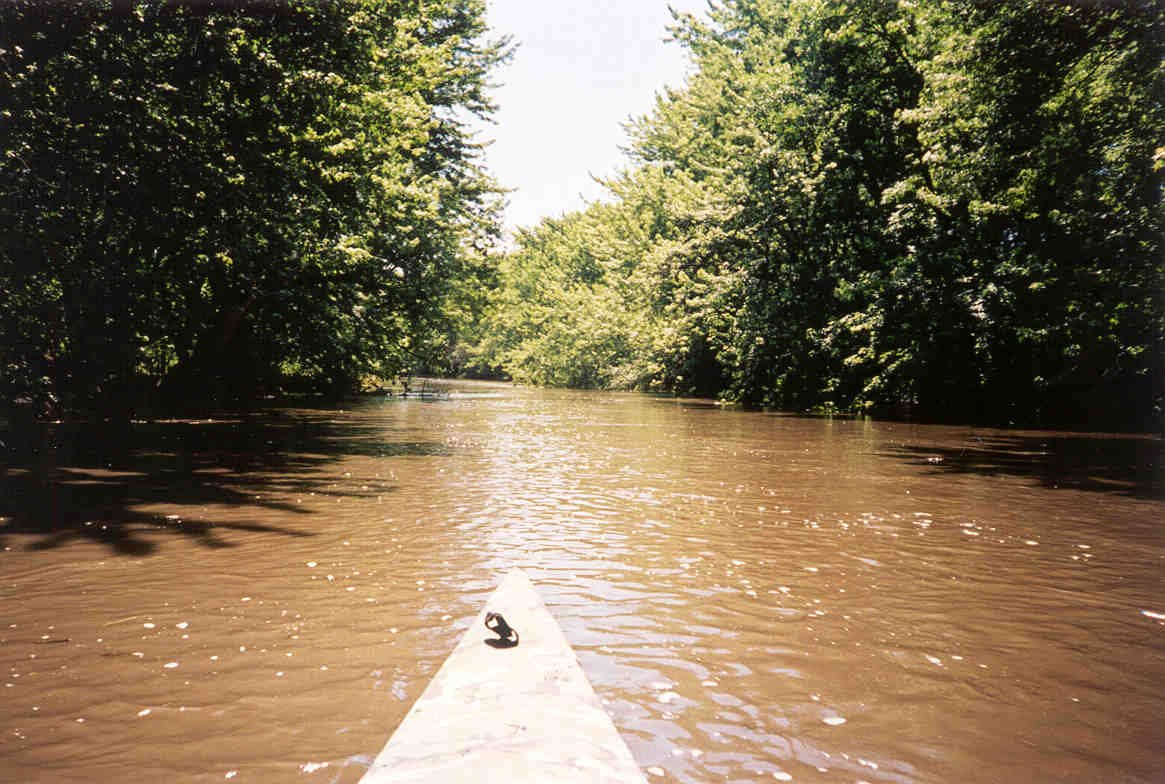