We had an unexpected thunderstorm at midnight which provided considerable lighting but the rain and winds were rather light. We awoke early wanting to reach the last lock on the Illinois River at LaGrange before the heat of the day set in. We were treated to a beautiful sunrise on our departure downstream of the Highway 67 Bridge southwest of Beardstown. A private dredging contractor, TNT Dredging, was busy deepening the main channel with his gray and white hydraulic dredge and pumping the spoils to a hidden disposal area on the left bank near RM 87.1. This was the first hydraulic dredge observed at work maintaining the main channel during our trip.

Moderate westerly winds slowed our descent again. We plied along the leeward side of shoreline trees and underbrush where possible to reduce the wind stress, obtain shade and view wildlife. Black vultures were common along the shoreline and prowled the river's edge in search of dead fish. We observed more reaches where the bank was covered in weathered white mussel shells which offered a marked contrast to the more typical grayish-black clay.

We pulled out for mid-morning brake at Meredosia, a small old river town on the left bank near RM 71, to search for snacks and refreshments. Unfortunately there were no stores in the immediate area of the landing so I volunteered to walk a half-mile to the downtown area where I found a lone small grocery store. Highway 104 was the major thoroughfare through the wanting business district. Several storefronts had small signs in their windows that provided support for a strike at Celanese Corporation, a major employer in the community. I discovered that the company locked out union employees because they failed to get concessions on pensions and medical benefits in the union's contract. The mood in the grocery store was somber and I sensed tension in the voices of the check out clerk and store patrons. I purchased a handful of candy bars and two large cold Pepsis and returned to the landing where JJ was waiting in the shade of a small tree. We consumed our mid-morning indulgence with some guilt considering the idle workers of the community.

Meredosia, Illinois - "In 1816 travelers to the area reported that a French priest by the name of Antonie D'Osia was living in the area near a Native American village. Settlers arrived later and the town was surveyed in 1832. Citizen's named the town for the priest and apparently, a nearby lake (i.e. mere). Meredosia was an important hub for the pearl button industry and supported four button factories in the early 1900s until the mussel beds became depleted and with the introduction of plastic buttons.. Commercial fishing on the Illinois brought four fish markets to town. A record 500,000 pounds of fish were caught in just five seine hauls by commercial fishermen in 1931. Fishing deteriorated in the 1930s due to polluted waters."

A quarter mile long wall of massive concrete grain silos rising to the sky on the left bank at Naples presented an imposing view of the eastern bank as we paddled along the opposite shore at noon. A barge parking lot or fleeting area dominated the right shoreline and was lined with barges for more than a mile downstream. The shear vertical walls of the barge's sides provided some protection from the strong southwesterly winds so we laid a course that skimmed along adjacent to these disjointed hulks of steel that hid the right bank.

We started to look for a campsite at 3 p.m. and our initial attempt was directed to a boat launch access marked on our navigation chart on the right bank below Big Blue Island (RM 57.3). The access was not found and the site had apparently been taken over by a gravel mining operation that was cutting into the adjacent floodplain. We then scouted out the Ke-Le-su Access Area on the right bank below Hwy 106 (RM 56) but the grounds were torn up and very muddy. The shorelines for the next several miles downstream were narrow and comprised mostly of wet clay or occasional rocky bars which did not offer much of a prospect to pitch our tents.

We eventually pulled out at Motezuma Landing Access Area (RM 50.2) and were about to pitch our tents in an open grassy area when we discovered land was posted as private property. I walked to a nearby house west of the landing but was not able to find the property owner to obtain permission for camping. We re-packed out canoe and descended about a half mile and entered a secondary channel formed by the large McEvers Island thinking that we might find a place to pullout on the island or along the narrow side channel. However this shoreline was muddy and the steep banks and the heavy riparian vegetation did not offer any suitable encampment.

We crossed back over the main channel below McEvers Island and headed back upstream to the Bedford Landing Access Area (RM 48.6) on the west bank to see what this area would offer. As we approached the small landing five scraggly looking domesticated ducks swam out from shore to greet us and appeared to begged for food. An elderly man was preparing to launch a boat with his family at the landing and he indicated that it would be permissible to camp in a thinly vegetated area just downstream of the ramp since it had been used for this purpose in the past. We didn't need or seek any other consul and were quick to lay claim to a small area of ground under the shade of small silver maple trees shortly after 6:30 p.m. We made our dinners under the watchful eyes of the ducks we befriended and they quacked endlessly and wandered in and around our campsite through the early evening fighting over any scraps of offered or discovered food. They finally departed after we entered our tents for the evening. 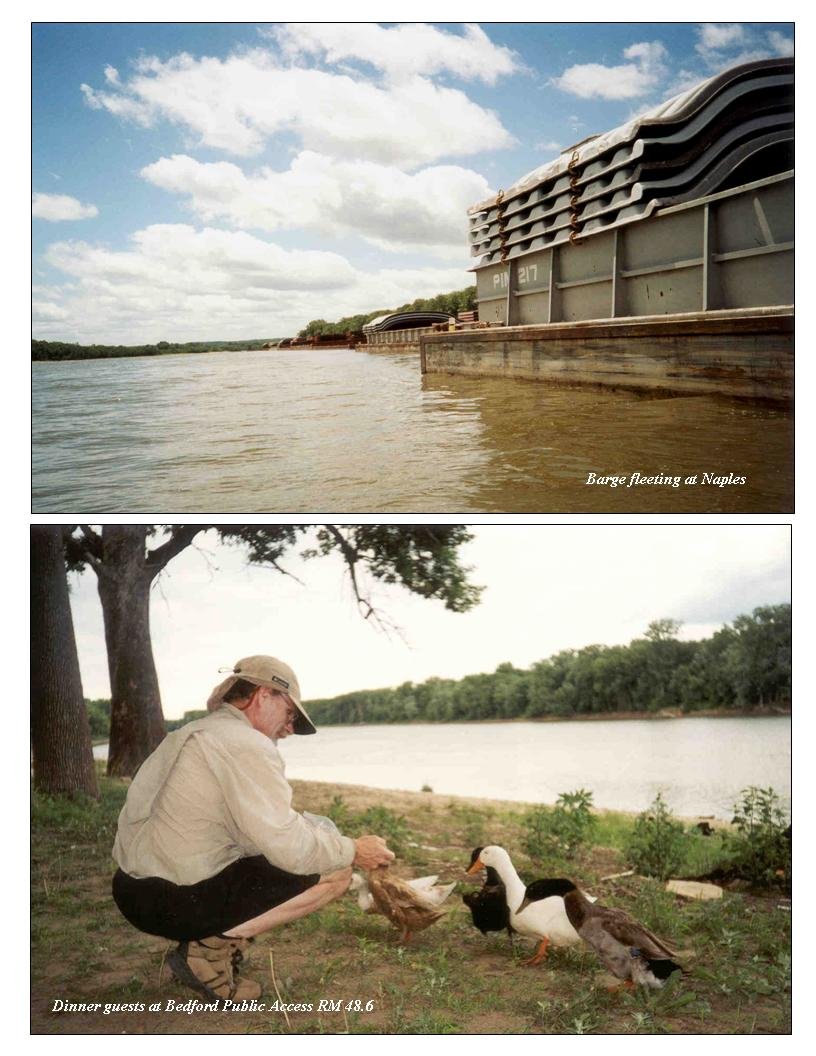