We were up at 5:30 a.m. after a restless sleep due to a constant shrill from unknown machinery from across the river, the whines of diesel engines from passing tow boats and the warm humid conditions in our tents. We also had a visit from a deer that voiced its displeasure by snorting at our trespass to its riverside habitat in the early morning hours and we were awoken periodically through out the evening by the slapping of beaver tails on the calm river's surface. We departed our noisy, wooded and muggy encampment just after 6:30 a.m. under hazy skies.

A few miles upstream of Hennepin the river made a sweeping bend to the south and cut a lower gradient course to the Mississippi still more than 200 miles downstream. Years ago, one could take a 90-mile shortcut to the Mississippi by canalling across northwestern Illinois from Rock Island to Hennepin via the Hennepin Canal. The canal's western terminus ends near the mouth of the Rock River on Rock Island's south side. Large portions of this waterway are still intact today but the locks are no longer functioning. The State has constructed a popular bike trail along its course. I had the opportunity to see the feeder canal which captures Rock River for the Hennepin Canal at Sterling/Rock Falls and the western end of the canal near Green Rock when I paddled the Rock River several years earlier. I asked JJ if he would like to make the shorter overland trip to the Mississippi via the remnants of the Hennepin Canal, but he preferred the planned route to Grafton where we would encounter the Father of all Waters without the need for portaging.

We stopped at Hennepin (RM 207.5) at 8 a.m. to replenish our water supplies at a local marina and found a new pair of sunglasses for JJ at a local hardware store. He had broken his shades during the first day of our journey and they were being held together by duct tape and a prayer. The morning turned hot and humid again and our descent was slowed by moderate headwinds. At around 11 a.m. we paddled into the mouth of Senachwine Lake, a large backwater near RM 199, and searched unsuccessfully for submersed aquatic vegetation. The water was very turbid and JJ recorded a meager transparency of only 11.6 cm, likely insufficient light penetration to support underwater aquatic plants. The river several miles above the lake had a transparency of 29.2 cm suggesting the backwater's higher turbidity was influenced by local factors, including planktonic algae on account of high dissolved oxygen concentrations (12.5 mg/L) and perhaps suspended bottom sediment revealed by its brown color.

Crudely constructed four-foot square rafts supporting bisected fifty gallon blue plastic barrels were present along the main channel' s shoreline above Henry (RM 196.5) at noon. Upon closer inspection we found four large white eggs resting upon a mound of twigs and wood shavings in the middle of the divided barrel at one of these unusual floats. Downstream across from Henry, Illinois (RM 195.8), a few dozen domestic geese and several emperor geese occupied a sandy beach. We assumed the upstream rafts provided nesting structures for these waterfowl. Their raucous voices announced their displeasure at our passage and they quickly scattered out over the river or sought refuge in the riparian vegetation away from our view as we padded by.

We faced moderate headwinds under bright skies on our run down to Lacon (RM 189). Numerous recreation craft joined us on the river in the hot mid afternoon sunshine and their bow and stern waves jostled us up and down as we made our leisurely pace downstream averaging about 3 mi/hr. We pulled out at the Lacon's marina/harbor just south of Highway 17 to stretch our legs. We both simultaneously spied Mike's Dinner, a few hundred feet away on the opposite end of a large parking lot and we were soon off for a mid-afternoon meal and cold beverages. This time we were not turned away. Great food!

We reached Chillicothe at 5 p.m. and began our search for camping opportunities. We passed up the public access site along the city's waterfront thinking that camping wouldn't be allowed and we saw no evidence of such activity along the shoreline. JJ thought we should go ashore to check, but I convinced him to continue our paddle downstream without investigating. We found out later that camping was allowed at the Chillicothe access but it was in an area away from the river and hidden from our view. Sorry JJ! We next checked out the Chillicothe Marina but the area looked private and heavily developed so we continued downstream into Upper Peoria Lake facing a strongly southerly breeze.

Hamms Holiday Marina (RM 178.6) on the western shore of Peoria Lake was our next stop. We paddled into the marina's protected harbor and found an open boat stall between two huge spacious house boats at the marina's dock. Several elderly men and women were having afternoon drinks under a large awning of the marina's dock as we tied off our canoe. They provided a friendly greeting and asked about our trip. When they heard of our need of a campsite, one of the gentlemen used his cell phone to call the proprietor of the marina to relay our inquiry.

We secured a campsite in an open field with sparse grass adjacent to the marina's parking lot and restaurant. Nearby on the shore of lake, a worker in a hooded fireproof suit was cutting up worn out rusted barges piece by piece with an acetylene torch. Another worker was moving the rectangular cut steel plates with a small crane and dumping them onto a huge jagged reddish brown mound of steel that rose up twenty-five feet high along the bank. Three more "retired" barges jutted out from shore behind the workmen into the lake and awaited a similar fate. JJ and I joked about their work being "cut-out" for them for the foreseeable future. It was nice to see the heap of steel here on the bank waiting for recycling rather than rusting away somewhere along the channel border destroying habitat and creating hazards to navigation.

We quickly set up our tents and cleaned up for dinner at the Dockside Restaurant located at the inlet to the marina's harbor. We had a very long wait because they were busy but we were in no hurry, a disposition that comes with river voyaging. We retreated to our tents after a fine filling meal at 9 p.m. as distant lightning streaked across the eastern skies. 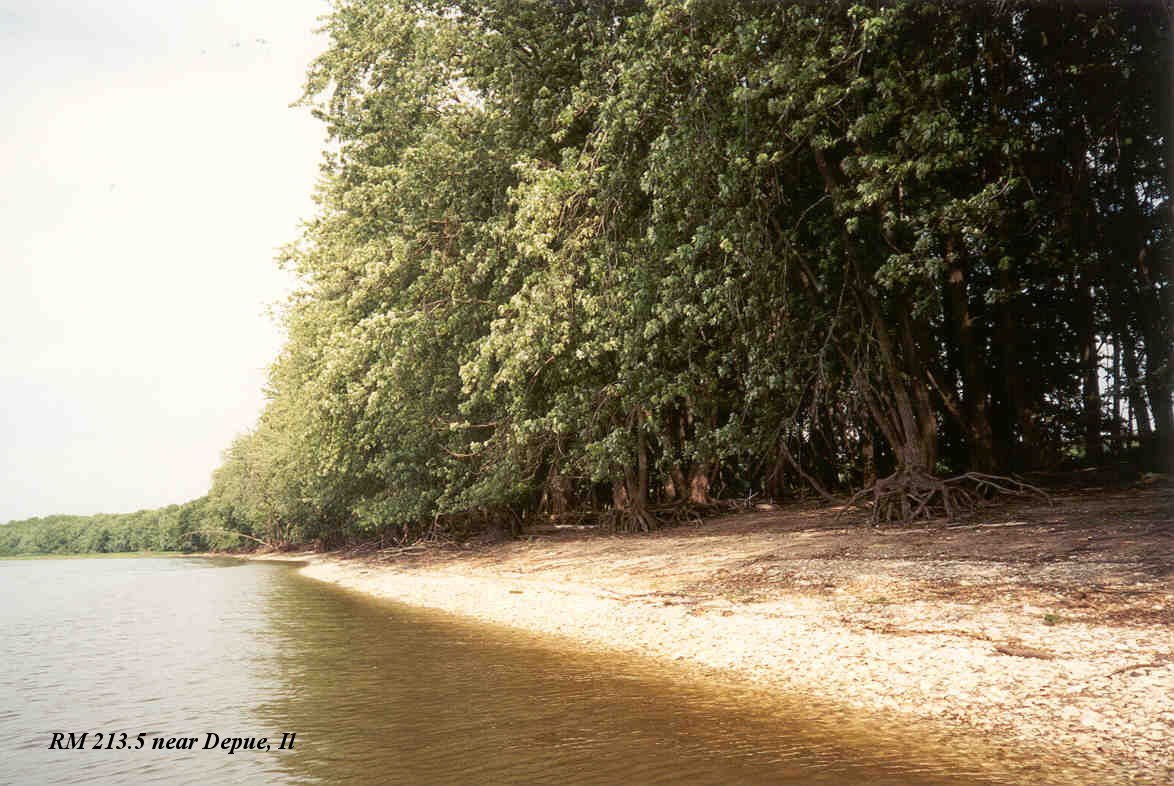