I was up at 6:30 a.m. to register our campsite at Pere Marquette State Park since we were not able to do that the previous evening due to our late arrival. The campground attendant, Rich Huebner, was just opening for business as I walked up to his RV on the south side of the campground. I explained our late arrival the previous night and indicated our intentions of staying two nights. When he heard of our previous problem of being booted out of Godar Diamond Access Area sixteen miles up river and our night paddle to the campground, he indicated that he would only charge us for one night. I thanked the kind gentleman for his generosity and returned to our campsite.

Upon return to our camp, I discovered messages on my cell phone indicating that Uncle Harold and Aunt Beverly, our lunch hosts at East Port Marine on Lake Peoria, had contacted my wife and indicated they would be willing to pick us up at Grafton in the afternoon. They would haul us back to southern Wisconsin were we would meet my wife for the return trip to La Crosse. This would save my wife a long trip to Grafton but would mean a long day for Uncle Harold and Aunt Beverly. I called Uncle Harold and indicated we accepted their kind offer and arranged to meet them in the early afternoon at the Grafton Public Access.

I awoke my partner who was sound asleep in his nearby tent and explained the travel coordination for our return to La Crosse. He agreed with the plan since this would mean getting back to La Crosse a day earlier than we had initially planned. We ate a quick breakfast of trailmix then commenced packing for our portage back to the Pere Marquette Boat Harbor.

We were heading down to Grafton shortly before 9:30 a.m. Bright sunshine and light tailwinds provided favorable conditions for our last morning on the river. Enormous duck blinds were spotted along the main channel border just below Pere Marquette. The blinds were situated between Swan and Gilbert Lake backwater areas that were hidden by the main channel levees. Portions of these backwaters are within the Mark Twain National Wildlife Refuge and likely attract numerous waterfowl and waterfowl hunters during the fall migratory season.

High forested bluffs rose up along the river and provided an attractive vista on our short seven mile run down to Grafton. We observed two ferry services, one at mile 3.5 (Brussels Ferry) and the other at mile 1 at Grafton, both were hauling a small load of cars and trucks to opposite sides of the river. The Grafton ferry carried interstate travelers between Illinois and Missouri.

Several large elongated forested islands separated the Illinois River from the Mississippi River near Grafton, an old river town which resides on the east bank about thirty miles above St. Louis. The Mississippi slowly began to mix with the Illinois River through large secondary channels that enter from the west, the first starting about 2 miles up from the Illinois' mouth. We noticed numerous kayakers in one of the secondary channels. They were heading upstream into the Mississippi's strong current apparently touring the islands that form the boundary between these two large floodplain rivers. With each secondary channel inflow the Illinois surrendered some of its unique quality until it was finally assimilated by the nobler stream, The Father of All Waters, just below Grafton.

"As it approaches the end of its course, the Illinois begins to flow parallel to the Mississippi as though it were loath to lose its identity, it keeps a slender finger of land between itself and the great river whose chief tributary it is."

We made our last traverse across the Illinois River's main channel to Grafton just upstream of a northbound tow pushing a load of fifteen barges. We arrived at the treeless Grafton Access Area (RM 0.3) in hot sunshine at 11:15 a.m. which ended our journey down the Illinois Waterway eleven days from the mouth of the Chicago River near Lake Michigan 327 miles upstream.

Uncle Harold and Aunt Beverly arrived shortly before 1 p.m. We packed up and secured our canoe on their large van for the long trek back to Wisconsin. We sat comfortably in the rear seats in an air conditioned environment and watched the Illinois River's basin speed by as we headed north while providing a debriefing of our trip to our kind relatives from Peoria. 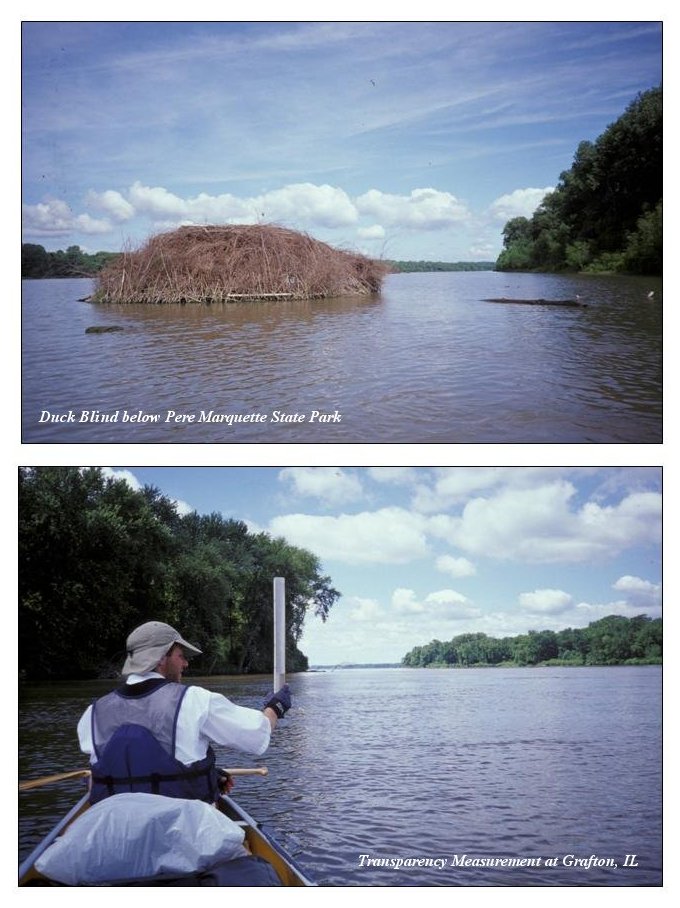