The Illinois Waterway runs 327 miles from the Lake Michigan's south shore at Chicago to the mouth of the Illinois River at Grafton, Illinois where it meets the Mississippi just north of St. Louis, Missouri. The historic pathway from the Mississippi to the Great Lakes was "discovered" by Louis Jolliet and Father Jacques Marquette during their tour of discovery and exploration in the summer of 1673. However, the corridor was likely used by Native Americans for centuries prior to European settlement of North America.

The Illinois Waterway consists of three rivers including, the Chicago, Des Plaines and the Illinois. This riverine passageway was an acceptable means of conveyance for the early explorers, voyageurs, and other travelers who traveled light with small canoes, pirogues and small boats for hundreds of years. The waterway was dramatically altered in the mid to late 1800s with the construction of the Illinois and Michigan Canal which extended from Chicago to the Illinois River. Then in 1900, this canal system was greatly expanded and "improved" with the opening of the Sanitary and Ship Canal that Linked the Chicago River to the Des Plaines near Joliet, Illinois and resulted in a major diversion of water away from Lake Michigan. The waterway was enhanced again with the construction of another diversion channel in the 1920s, the Cal-Sag Channel, located south of Chicago in the 1920s. Channel deepening and the addition of major navigational locks and dams on the Des Plaines and Illinois River were completed in the 1930s. These hydraulic alterations transformed the Illinois Waterway into a major inland navigation system connecting the Great Lakes to the Mississippi; however, it also resulted in many disputes and law suits over the transfer of water from the Great Lakes and the impact of wastewater diversions on the receiving waters downstream.

Louis Jolliet in 1673 recognized immediately the significance of a "good waterway" between the Great Lakes and Mississippi and the possibility of improving this route by the construction of "one canal through only one-half league of prairie" at the Chicago portage. Although Jolliet greatly underestimated the canal's length, the idea of the need for a canal at Chicago never faded and was finally recognized as an absolute necessity in the mid 1800s as Chicago's population rapidly increased. Although early arguments to justify the canal included the need to improve navigation for military and commercial interests, the primary reason for the canal was to divert disease carrying wastewater away from Chicago's drinking water intake in Lake Michigan. In order to accomplish this task, it meant completely reversing the flow of the Chicago River, a hydraulic engineering feat of monumental difficulty and cost. This fascinating story has been told with remarkable detail and intrigue in Libby Hill's book, "The Chicago River a Natural and Unnatural History" (Hill, 2000).

Besides completely altering the flow, channel structure and water quality of the Chicago River, the early flow and wastewater diversions had major water quality impacts on the lower Des Plaines and Illinois Rivers. It has been said that the Illinois River has been the most extensively studied river in the world (Mills et al. 1966). Pioneering studies on the impacts wastewater additions to rivers were conducted on the Illinois River by prominent biologists who advanced the study of stream pollution biology.

As a water quality biologist by training, I had a professional interest in viewing a riverine system that had been greatly altered by humans. Canoeing the Illinois Waterway offered a chance to observe rivers that I read about in text books or heard about from my graduate school professors. However my intrigue with water quality problems in the Chicago area was lodged in my memory long before graduate school. It was actually in the spring of 1969, a mere junior in high school, that I began to hear and read about water quality problems in the Chicago area. I learned of a bold mysterious character in northeastern Illinois who began his own personal crusade fighting pollution problems directly by blocking outfall pipes, carrying hideous disgusting effluent, with cement and other materials. He would then put up prominent signs along roadways castigating the polluting industry and singed his announcement with his moniker, "The Fox." I learned while planning this canoe trip that The Fox passed away in the fall of 2001 at the age of 70. I also discovered that his real name was Jim Phillips, and that he and six other "kindred souls" re-enacted the 3,000 mile Jolliet and Marquette expedition in 1973, its 300th anniversary. It saddened me that I was unable to thank The Fox for stimulating my interest in water pollution control while in High School.

My previous canoe trips down (and sometimes up) long river systems had been solo trips. The trip down the Illinois Waterway would be different. My oldest son, John Joseph (JJ), announced at Christmas 2004 that he would accompany me on my next trip - an unexpected but welcomed gift that I greatly appreciated.

I must thank a number of people who provided assistance in the successful completion of this canoe trip. Kurt Brownell graciously provided a tandem canoe saving the expense of renting or buying another canoe. Bob Williams, Southern Illinois University, provided his journals and insights on what to expect based on his own two previous solo trips down the Illinois Waterway. Matt Short, Gregg Good and Howard Essig of the Illinois EPA provided background water quality information and references and overall moral support as did Bill Franz and Pete Redmon with the U.S. EPA. Susan Urbas and Bill Pomerantz of the Chicago River Paddling Center, provided permission to use their dock for launching our canoe and useful safety information on paddling in downtown Chicago as did Mark Steingraeber, U.S. Fish & Wildlife Service. Dick Lanyon, Metropolitan Water Reclamation District of Greater Chicago, provided valuable information on the Sanitary Ship Canal, water quality information, historic information about Chicago's sewers and wastewater treatment plants and field reconnaissance for a portage to the Des Plaines River. Of course I can't forget my wife Beth, Uncle Harold and Aunt Beverly who helped with transportation and their support and encouragement. Finally, I must again thank my son for his companionship, comical relief on long hot days of paddling and assistance with transparency measurements, photography and his ability to deflect flying fish. 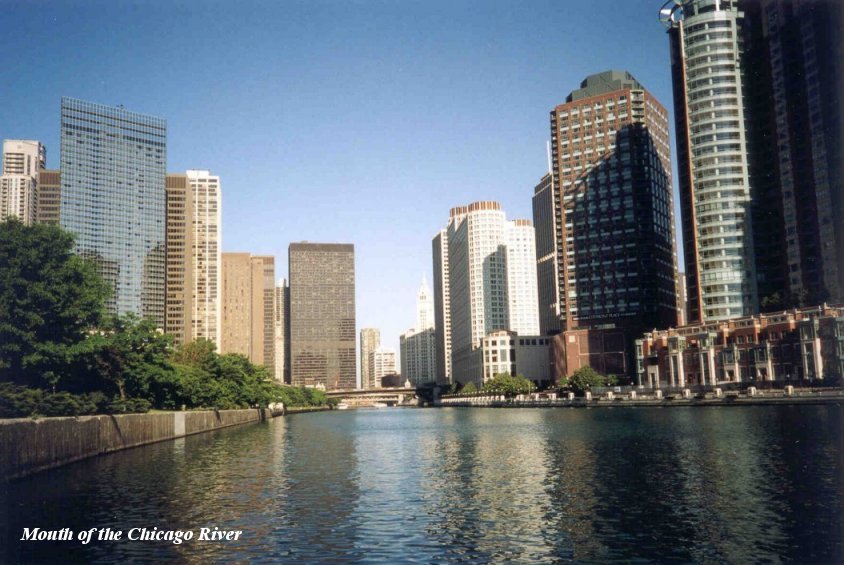 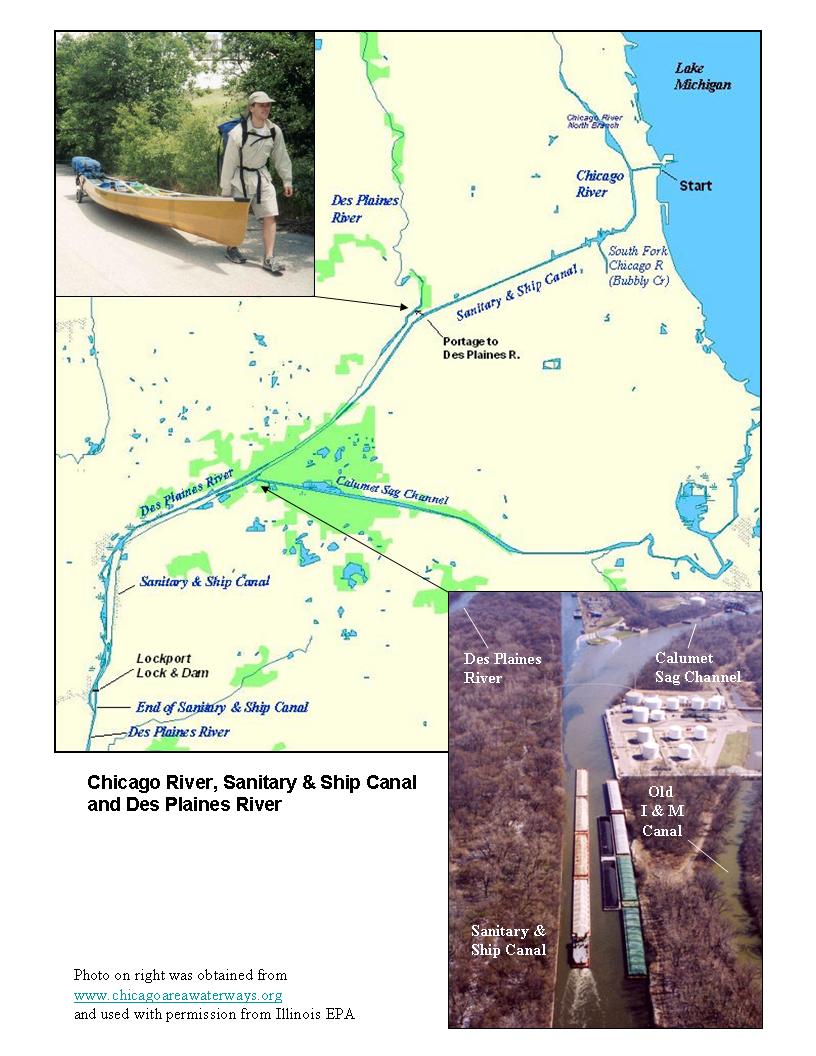