Another 5:15 a.m. weather report still indicated moderate to strong winds from the east and chances of thunderstorms. The weather near the Menasha Lock was deceivingly calm since it was protected by being on the leeward side of Doty Island, which separates Lake Winnebago from the Lower Fox River. I was tempted to arrange a by-pass of the lake by going overland to Oshkosh, but this would have meant another day's delay. I could not see spending an additional night camping at the Menasha lock and I was eager to get moving again. So within a few minutes, I was rushing to stow gear into my dry bags and head down the lake while the winds were not excessive. I was finally heading back up the lock channel towards Winnebago at 6:30 a.m. As I passed the downtown levee, three elderly fisherman were relaxing on five-gallon pails and watching over their poles. They reported catching lots of small fish (perch?) and showed me one as I passed by swiftly.

The channel widened as I approached the lake and noted a marked improvement in water clarity. This was likely promoted by the large beds of wild celery, which seemed more abundant in this portion of the Menasha channel. At 7:02 a.m., I entered Lake Winnebago at the northeastern tip of Doty Island. Wave heights were about 1 to 2 feet with no white caps in sight. The wind was out of the east at about 12 mph. I quickly sailed down to Neenah Point and passed the Neenah Channel outlet of Lake Winnebago which, combined with the Menasha Channel, forms the north and south (respectively) boundary of Doty Island. I figured this was the point of no return and decided to continue onward after a short prayer.

"Doty's Island (from Governor Doty), divides the lower Fox into two channels. The government lock is at Menasha, while at Neenah (once called Four Legs) there is a fine water-power, which a fall of twelve of fifteen feet, the "Winnebago Rapids" of olden time. Governor Doty's last residence in the state was the little log cabin on Doty's island… a site where treaties with the Indians were signed under the old Elm Council tree across the river from his cabin."

By mid-morning, the winds had picked up to 15 to 20 mph. I had to zigzag down the shoreline to avoid the heavier seas in deeper water and to keep the canoe from being broadsided by breaking waves near the rocky shoreline. I also had to avoid crashing into the hundreds of boat piers that extended out into the lake by as much as 50 to 100 ft, some of which had unattended fishing lines. This circuitous route added considerable distance and time to my trip down the lake.

Navigating around the numerous points proved most challenging and hazardous for here is where the lake coughed up its most treacherous seas and greatest wind shear. Wave heights were approaching four feet in deeper water and white caps where common. Several times I took on water as waves broke over my left bow when I tried to quarter the easterly winds. Then, I would frantically use my large foam seat cushion to quickly remove the unwanted liquid cargo while trying to maintain a safe heading. While ascending the lake, I sought refuge in any private or public boat harbor or natural shoreline feature that would offer protection from the winds and waves. These refuges provided a welcome relief, water break and chance to consume a granola bar while plotting my course to the next major point. After a few minutes and another Hail Mary or two, I was off running up the wind-swept lake.

Sometime around mid-morning, I passed a group of young kids fishing off a pier in restless, turbid, gray-colored water while their mother or guardian watched from a tree-lined bank. I advised them to be careful for the waves were rough and the water was over their heads. My warning brought a quick and robust response from one of the boys who indicated he had already fallen in once this morning. I glanced back at the shoreline lifeguard and observed her laughing and returned a smile and continued onward.

I stopped at a county boat ramp at the southern end of Cowling Bay around 10 a.m. to see if they offered camping facilities and to take a needed break. The parking lot was almost empty except for a few elderly men who seemed to be consoling each other about the foul weather and the desire to be out on the lake with their rigs. I think they were surprised to see me paddle in with my 16 1/2-foot craft while their larger fishing boats sat idle on their trailers. I walked around the park for several minutes while the blood flow returned to my buttocks and legs and the stiffness disappeared. I observed a prominent no camping sign near the entrance road and decided to head to South Asylum Bay where I knew the DNR had a Field Operations Station. After re-supplying my two-quart canteen with iron-tainted water from the park's pump, I was on my way again battling the waves and wind.

At 11:30, some five hours after leaving the Menasha Lock, I finally found refuge for the night at the DNR's Fisheries Operation Field Station on South Asylum Bay. The bay gets its name from the old Winnebago Mental Health Institute, which is just a half-mile northwest of Asylum Point. This point was also the area where my canoe was almost sunk by 3 to 4 ft breaking waves. Although the day was still early, there was no way I could continue with my sore fingers, legs and back. Mike Schrage, the station leader, provided a nice welcome, tour of the facility and a bed for the night. I was in bed by 8 p.m. and took considerable comfort listening to the rain and the winds howl outside while I drifted off to sleep in the facility's bunk bed. 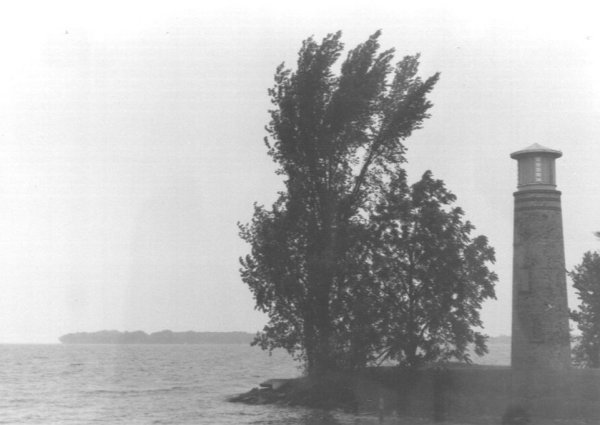