I entered the Cedars Lock pool opposite Kimberly, Wisconsin at 7:10 a.m. on a calm, 65- degree overcast morning. The green phytoplankton bloom at the surface attracted many carp that were sucking at the surface debris. I noted the Highway 441 bridge crossing, about two miles up from the dam, had a sound barrier on the RDB that extended out about one-third the distance across the river channel. The wooden wall didn't help much since the traffic noise was still pronounced as Fox Valley folks rushed to work while I slowly passed under the bridge.

The shoreline piers for the residential water front homes are larger in this pool and are constructed out of huge treated telephone pole-like pillars. Apparently, they use the same marine contractor or the same designer since they all appear to be of uniform construction. Appleton's wastewater treatment plant on the RDB presents an imposing view from my vantage point one-quarter mile downstream. The plant is quite large and contains two large bulbous sludge digestors tanks that rise up over the Fox. I canoed over the turbulent outfall area and was not offended by any odors or objectionable debris-laden wastewaters.

The approach to the tailwater of Appleton Lock 4 proved to be challenging and strenuous due to the turbulent outflow from a hydropower facility located on the RDB just a few hundred feet downstream of the lock. The plant's tailrace blasts water at several feet per second from a direction perpendicular to the intended lock heading. This hazard must have proved to be quite challenging to the vessels that plied these waters when the lower Fox River lock system was operating.

The grounds on the west side of the lock chamber were covered by waterfowl dung as a result of frequent mallard visits during their rest breaks from scrounging up food in the Appleton area. So far, I have found all the lock areas to be presentable and generally adequately maintained. The grass is cut to an acceptable length by contractors working for the Corps and paint is occasionally added to buildings, at least those in view of the general public. I took advantage of the small restroom to shave and refresh my water supply. This will be the last time I'll shave on this trip since I left my mirror above the small porcelain sink.

A glimpse of Lawrence University was observed on the far LDB as I approached Appleton Lock 3, which lies just above a railroad bridge. I greeted two young Corps employees that were busy painting the lock's restroom door in a light drizzle. They were eager to take a break and learn of my trip and inspect my canoe and cargo. However, they provided no knowledge of the required portage to get to Appleton Lock 2 tailwater. I charted a promising course up a narrow channel to the west of Riverside Paper Corporation's large white office building. Along the way, I passed over the facility's wastewater diffuser pipe, which jetted the paper mill's effluent across the entire channel on the upstream side of the Lawe street bridge. The effluent appeared clear and had no odor. My channel dead-ended at the backside of a large building and then I realized that the required take-out was back at Lock 3. I found my carry along a narrow walk-way immediately adjacent to the lock chamber's west side. It required unlocking a Corps' gate and following a passage just to the east of Riverside Paper Corporation's office building. I was finally heading in the correct channel by 11:20 a.m.

During my portage around Appleton Lock 2, I was greeted by a trucker from Missouri who was admiring a large dead carp in the Lock 2 tailwater area. He carried with him one of the smallest dogs I have ever seen. The dog appeared to be a special breed and had little hair. It looked like a miniature Chihuahua similar to the dog in the popular Taco Belle commercials, only much smaller.

There was no clear take-out area below Appleton Lock 1. The RDB bank was moderately steep, rocky and heavily vegetated. The left bank was flanked by concrete walls. I found a small opening in the shrubby vegetation and went through heavy underbrush and passed through what appeared to be a small hobo camp, though nobody was home. A light rain fell as I reassembled my gear and launched my canoe into the Appleton pool. I felt relieved after realizing that this would be my last portage on the lower Fox River. My thoughts now turned to Lake Winnebago, the next major obstacle on this journey.

"It was no holiday excursion to portage around the Appleton locks this morning. At none of them could we find the tenders, for the Menasha lock being broken, there is no through navigation from Oshkosh to Green Bay this week, and the way traffic is slight…. The banks being steep and covered with rock chips left by the stone-cutters employed on the work, we had some awkward carries, and felt, as we finally passed the cordon and set out on the straight eastward stretch for Kaukauna, that we were earning our daily bread."

I made a short stop at the Appleton Marina to ask to use their phone but was informed that wouldn't be possible since I wasn't a member. The proprietor hinted that they might make an exception for an emergency. Since I could think of none, I left with disgust and continued on up river. My mind quickly forgot the incident as I passed Lutz Park at Appleton and observed several boys fishing along its banks. They advised that if I wanted a great spot to fish, I should fish the island bank across from their encampment. They reported seeing fish jumping and swirling all morning along the island's edge, but the area was inaccessible to them without a boat. I thanked them for their suggestion but explained that I was just passing through. I cautioned them to be careful of what fish are eaten from the river knowing that sediments in this pool have some of the highest PCB concentrations in the State.

As I paddled upstream of the park, I noticed a small bed of wild celery growing in rocky substrate at the head of the island-prime fish habitat that the boys had already exclaimed. The waterfront homes above and below Lutz Park were set back into thick tree-lined hillsides. This seemed to be in sharp contrast to many downstream riparian owners who removed all woody vegetation and replaced it with sculptured lawns, revetments and docks.

I was greeted by moderate southeasterly winds as I entered Little Lake Butte des Morts. The winds were sufficient to resuspend the PCB-contaminated lakebed into a turbid froth. Although water clarity was poor, it was possible to observe clumps of Elodea in parts of the upper lake. Myriophyllum was very common but generally more diffuse and not a hindrance to my progress upstream.

At 2:25 p.m., I arrived at the Menasha Lock and was greeted by a heavy-set, gray-haired gentleman who asked me twice if I wanted to lock through. Then he asked twice again to see if I had the required five-dollar toll. I had the feeling that he thought I should portage around the lock since I was in a canoe and would not want to pay the required fee. I finally convinced him that I was definitely interested in using the lock and had no intention of making another portage today. I discovered later that I was the first lockage for the day. Dick and Dale, the lock tenders, softened up a bit when they found out I worked for the DNR (the agency that has contracted with the Fox River Management Commission to run the three locks at De Pere, Wrightstown and Menasha) and learned of the long trip ahead of me.

I finally found a phone at a small marina just above the Menasha Lock. The woman in charge graciously handed me her portable phone so that I could call home and provide a status report.

Menasha has a nice municipal dock and marina about one-half mile upstream from the lock. I visited with the young man who was minding the marina office and gift shop and he provided substantial geographical information of the Menasah and Lake Winnebago area. Unfortunately, he was aware of no camping facilities between Menasha and Oshkosh, some 17 miles distant. Further, he informed me that my planned camping area, Island Park or Garlic Island, was privately owned by the Bergstroms and may pose a problem. I agreed that was a concern but not my immediate problem. The weather had changed from hot and calm to cool and windy. Worse, the winds were out of the east, which would present a hazard for one trying to traverse Lake Winnebago's western shoreline.

At 4 p.m., I observed Lake Winnebago from a protected canal from the northeastern tip of Doty Island. The 10-15 mph easterly winds provided sufficient energy to form white caps and two- to three-foot rollers, which crashed along the rocky shoreline. Due to the weather and time of day, I decided to head back to the Menasha Lock to set up camp for the night.

A visit to the Theda Clark Hospital emergency room was made at 7 p.m. An infection on my neck that pre-dated the start of my journey was not improving. Dr. Scot Harbrick declared it to be "foliculitus" and prescribed a large vial of antibiotics. He also instructed me place a hot damp cloth on the area four times a day, but then rescinded to just washing the area with soap and water after considering the practicality of obtaining hot water during my canoe trip. 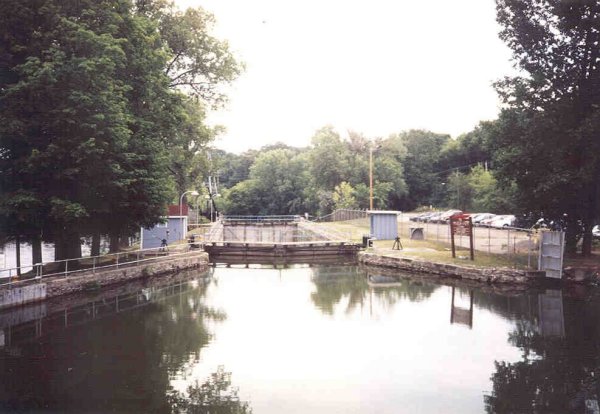