The boys and I arrived at the municipal launch at the mouth of the Fox River shortly after 9 a.m. I paid the obligatory three dollars to use the landing to launch my green Wenonah Prism solo canoe. Tim and John helped me load the canoe and then they took photos of me preparing to ascend the river. I made two trips out into Green Bay into moderate waves to assess the canoe's seaworthiness when loaded with 150 pounds of gear. After seeing the boys off to the Packer Hall of Fame, I was finally underway up the Fox at 10 a.m.

As luck would have it, I timed my departure when the Fox River was flowing backwards (south) due to the tidal effects in Green Bay and the moderate northeasterly winds, which provided additional thrust to propel me up the Fox this clear, 75 degree morning. The water was a turbid greenish-brown from diatoms that inhabit the river and bay.

"The Bay is thirty leagues in depth and eight in width at its Mouth; it narrows gradually to the bottom, where it is easy to observe a tide which has its regular ebb and flow, almost Like That of the Sea.We left This Bay to enter the river that discharges into it; it is very beautiful at is Mouth, and flows gently; its full of bustards, Duck, Teal and other birds, attracted thither by the wild oats of which they are very fond. But after ascending the river a short distance, it becomes very difficult of passage, on account of both the Currents and of the sharp Rocks which cut the Canoes and the feet of Those who are obliged to drag them, especially when the Waters are low."

I was greeted by a lone middle-aged gentleman in a sea kayak just upstream of the landing. He looked in disbelief when he learned of my Prairie du Chien destiny, which seemed like a continent away. I just smiled and wished him a good day on the bay. Besides the kayak, there were an assortment of pleasure boats, fishing boats and personal watercrafts (jet boats) heading down river to enjoy the warm bright day.

Two large pyramidal coal piles and one salt dome stood guard on the left descending bank (LDB) just below the Highway 43 bridge. The bluish-white mountain of salt was uncovered even though the Department of Transportation rules require it be covered when not in use. These landmarks are easily observed from the air as well as noticed on a prominent post card, which depicts the last few miles of the river's mouth.

At 12:12 p.m., I reached the first lock at De Pere, about 8 miles upstream, and waited 30 minutes with a small fishing boat at my stern for our turn to be lifted 10 ft into the De Pere pool. Two college-aged lock tenders, Chad and Eric, were running the manual hydraulic operation and were polite and efficient at collecting the required five dollar lockage fee. I pointed out to them that so far today this trip has cost me a dollar a mile. They were quick to point out the next lockage upstream would be free if I could reach it today.

I asked Chad permission to look over their facilities and watch them lock through a down- bound craft. Chad was proud of an Egyptian goose, which he reported inhabited the tail water area near a privately owned hydropower facility located immediately east the lock chamber. The goose was absent this noon but was replaced by many mallard "popcorn" ducks and a few Canada geese. The hydro facility was owned by the Bemsters (?) who reside in the large residential looking structure that has a portion of the Fox River passing through its basement.

The old lock master's house stands a few hundred feet upstream of the lock on the LDB. The house was completely boarded up but the coverings over the doors and windows are falsely painted to make them appear real. I was easily fooled by this charade until Chad pointed it out to me. I refreshed my water supply and continued my upstream adventure.

I arrived at the Little Kaukauna lock at 3 p.m. and was quickly ushered through with two other boats at no charge. The trip up through the De Pere pool this afternoon provided an awesome view of large 3-story mansions with finely manicured river frontages and attendant bathhouses, decks and docks. Although many boats were plying the waters of the pool, the backyards of the large river front homes were nearly deserted. This seemed ironic on such a beautiful Saturday afternoon. I was also pleasantly surprised to see several beds of aquatic vegetation including yellow water lily, sago pondweed, wild celery and a species of Myriophyllum. The water carried flakes of Aphanizomemon and clumps of some other large colonial blue-green algae, most likely Microcystis.

An abandoned red-stoned, ground-wood pulp mill spans part of the river channel immediately west of the Little Kaukauna Lock. A shell of a building is all that remains and the cavernous inside is home to hundreds of pigeons and sparrows.

Shoreline erosion from boat-generated waves was very obvious in parts of the Little Kaukauna pool. Dense reddish-brown turbidity plumes were evident along the shorelines due to the waves and friable silt-clay soils. The turbid water extended out 10 to 30 feet into the river channel as it made its way downstream.

At 5:50 p.m., I entered the access channel to Rapide Croche Lock. The water surface was a bright bluish-green arising from the growths of cyanobacteria (blue-green algae) which develop into profuse blooms in these isolated channels. These slack water areas receive little mixing with the Fox River and augment the growth of these microscopic plants. My first portage was found on a moderately steep and heavily vegetated bank about a hundred feet below the lock gates on the LDB. Fortunately, a small clearing had been made to facilitate the carry to the next pool. Since I had already completed 20 miles of canoeing today, I decided to set up camp for the night.

I pitched my tent and stowed my gear within the fenced-in lock area at Rapide Croche. I had obtained a key from Nicholas Brittnacher, U.S. Corps of Engineers at Kaukauna, prior to the trip to aid in my portages around and through the 16 closed locks owned by the Corps between Green Bay and Lake Winnebago. Although I did not have specific permission to camp at their closed facilities, I felt justified by having the key, being a citizen and federal tax payer, and Department of Natural Resources employee on "unofficial" business.

I dinned on Richmoor beef stew and an apple as I watched over the abandoned white-faded lock master's house a few hundred feet away. I faded off to sleep by 8:30 p.m. At 2:30 a.m., I awoke to find lights shining in at both ends of my Eureka Timberline tent from flashlights being wielded by two Outagamie County Sheriff Department officers. There had been a report of a disturbance on the opposite bank of the river and they were responding to the call. I am sure they were as surprised to find me camping here as a I was in being roused out of bed in such a deep slumber at such an early hour. After several minutes of incoherent interrogation and showing my drivers license and DNR identification card, they deemed me harmless and wished me a good night's sleep. As they walked away, I heard one of them say, 'nobody else should bother you tonight'. I had little sleep after that episode and was eager to break camp at 5:30 a.m. 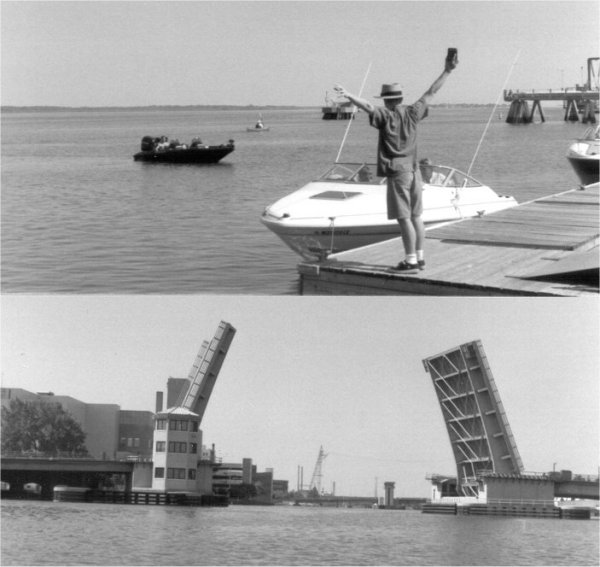 Top - Son Tim trying to gain the attention of his dad who is traveling the wrong way out into Green Bay.

Bottom - The new Ray Nitscke memorial bridge spans are raised while I headed up the Fox.